.... or season's greetings, or happy holidays - whichever you prefer:)
the year is nearly gone, I can't believe that 2012 rushed by so fast! and I only just managed to make my traditional door wreath yesterday - usually it's hanging by mid-december at the latest. but never mind, I made it, though this time I didn't collect all kinds of greenery; I only used variegated holly and the reason for this is that all the variegated ones grow like mad - while the pure green one doesn't exactly rush into things here! we planted two (boy and girl) on the day we married, and they've been unstoppable ever since:) there are red berries on it, but the large leaves hide them rather well... the bow is a very old one I literally made decades back.... 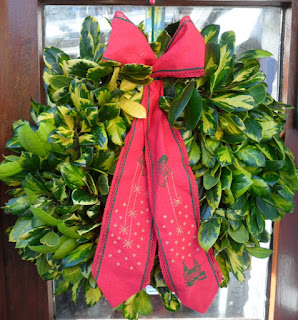 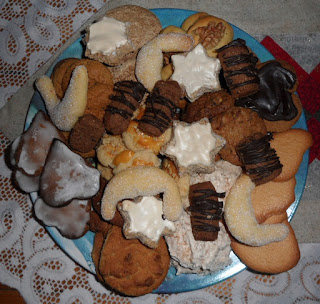 same for the christmas cookies. when I still lived in germany, I made loads of different ones; bit by bit I cut back over here, because with only three people and the occasional visitor there aren't enough mouths around to finish all of them. I did do most of them during the last weekend, so at least they are very fresh:) nobody likes to eat old cookies around easter! not even the dog....
and now I am off to dig through all the books I received:) the next few days will be spent on reading, knitting and spinning, only occasionally disturbed by a bout of cooking (and eating)! I've been looking forward to this for weeks - so here I come! btw - I received the very first handmade christmas gift from my son - who has been working on a lathe in school and took the opportunity to make a "needle holder" for me.... happy days during the rest of the year to everybody!
Posted by Woolly Bits at 14:01 5 comments:

there's not much to show here just now! I finally finished the fletta cardigan, but I didn't upload the pictures - yet. it was late at night and with a flash, so I think I might have to adjust the pix a lot to show the true colours (or at least as true as I can make them....). the finished cardigan was packed up and sent away only a few hours after I added the last touches and there was no time to wait for sunshine or even just daylight:) talking about last minute gifts....
I also finished two other knitted gifts - which I can't show before christmas. and I did another project - which has to wait after the pattern is published, because it was a test crochet.
I did however change the header picture - this is what the last few mornings looked like! below zero temperatures meant that everything was white with rime, but it all melted away quickly during the day. today we woke up with rain - but at least it meant that the roads had no icy patches! it looks nice - but can be rather dangerous for bicycle riders! the weather forecasters are funny guys (and girls) - some of them predict more of the same, some colder spells, but a lot of rain and no real snow etc. for some time to come. others however predict a very cold, icy and snowy spell for all of us for a prolonged time - actually it should already be here and last until the new year! what to believe now?
at least I have plenty of materials to do the christmas baking - and it's high time now! I made two sorts, peanut butter cookies - one of our absolute favourites (recipe on page above). and mocca-hazelnut macaroons - which are ok, but won't make it on our list, because they flattened out a bit and don't really taste very special. and now I am off to do more - not sure which ones, but I have to do coconut macaroons at least!:) and I started a new knitting project - to be enjoyed this evening. it's the best stage of knitting - when you are still full of enthusiasm about the project and can't wait to get your hands on those needles:) best of all - when it's a project that will be finished before the absolute boredom sets in that usually befalls me, when I am working on a larger project!
Posted by Woolly Bits at 06:12 6 comments:

it's been a while.... by now the leaves are off the trees (Elke - it didn't look half as nice today, or rather it was so foggy that you could barely see the tree in the header, never mind the other side of the valley....), the nights are often frosty - but the day temperatures are still in the plus grades, so that we do have icy patches after dark, but during the day the roads are ok... I hope that it stays that way; at the back of my mind I have the niggling worry that very soon we might have snow and ice again and problems with shopping etc.. and I am talking about shopping for food, not for elaborate christmas gifts etc.!
which brings me right on to the reason why there was so little blogging done here. several larger projects as christmas gifts mean very little time for anything else I could show here! but - it's looking good, I am making progress and hope to be finished in time (without night shifts, if possible:). 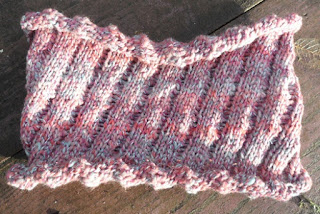 this is a small project I used to test out a bigger pattern. the first time round I chose a needle size too small and ended up with a piece of cardboard (Lagerfeld might have worn it instead of one of his ubiquitious stiff collars:). after ribbing and going up in needle size I ended up with a wearable cowl. which could be improved on, it's far from perfect. if you wear it like this it rolls up to the outside, which is alright. if you try to wear the purlside out, you end up with a ring around your neck that feels uncomfortable and looks.... a bit like a rodon cake tin! the yarn is darker in real life, handspun superwash merino, dyed with food dyes, plied with a fine cotton thread. I am not sure if I leave it like this and wear it - maybe. or I'll just pull it all apart and use the yarn for something else.... I don't think I'd buy superwash fibres again - they have an odd feel to them, a bit like cotton balls, nothing like wool at all:( 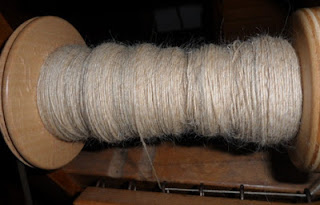 I also spun some honey coloured mohair I had in stash for some time, but I only managed 200 of the 300 g, the rest is still in the corner, waiting for a quiet moment. I miss the spinning, but if I start doing it right now, I loose too much of the time I need for finishing christmas stuff! but I am looking forward to lots of spinning time during the holidays:) no plans for the mohair yet. I think it's too scratchy for a scarf, no idea what I'll use it for or even if I should ply it or not. 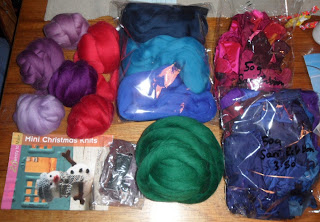 to make sure I don't run out of work during the holidays I stashed up from Suzie during the last spinner's meeting:) there are some small balls of merino in purple, red and green. also two bags full (100 g each) in different shades of blue. I got two 1 kg balls of teeswater (I think I might have bought most of what was in store by now:) plus a small bag of a few gaywool dyes. a small booklet with christmas deco ideas in knitting. and for creative times two bags full of sari silk strips, in the pic on the right, pink and purple tones.... 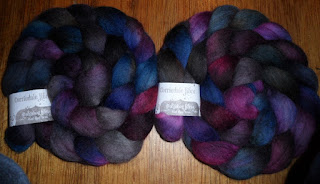 I had also planned to knit the "licorne" socks by J. Laidman.  I looked around for some sock yarn in the right colour, which isn't easy (the original yarn isn't available anymore and was from overseas anyway), because it has to be one with very subtle colour flecks, nothing with stripes or other patterns. I thought I found what I wanted on Beata's hedgehog fibres page, but when the yarn came it was too pinkish blue to fit the pattern. luckily the yarn found a new owner immediately! that's what the gaywool dyes are for - I think I stop hunting and just dye my own:) I also orderd some corriedale fibres in purple from Beata - and I can't get enough of it, have to keep myself from running to the wheel to start spinning it:) I only have 250 g, so it won't be enough for a large project. but I think if I spin it into a fine singles I should have enough for a nice shawl or maybe a shrug. 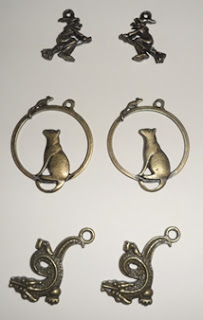 when a friend asked if I wanted to order some sock charms - I couldn't resist! it was fun to unpack the little bag they came in and lay out my collection:) some of them I wanted for a friend, who cannot resist anything "mousy".... I'll add them to the christmas gift, without socks, just as a small something to unpack.
the hands I want to put on handmade larger projects. the elephants and hippos (below the elephants) will go to new owners soon - and the rest will go into my stash for now - to be added to later projects... but in my mind I am already working on dragon and witch socks:) or maybe something with teapots in the design?
at the last spinner's meeting we also took apart the CTC exhibition in the museum in Castlebar. my picture socks are back home now as are my bobbin lace pieces - and the jacobs wool socks, which I'll send to their intended owner this week - after the poor man had to wait for so long to receive his "thank you" for the milksheep and jacobs fleeces he gave us for nothing! 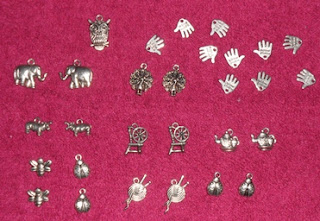 as I said, nothing much to show apart from materials... but while I am knitting away on the christmas stuff (I still have to write all the cards, too:() my head is whirling with new ideas, projects I'd like to start in the new year and techniques I want to try out soon... right now the garden is so dripping wet and cold, that I don't even make it down to the tunnel or dome. most days I just put bird food out and that's that:) it's too tempting right now to sit in front of the warm oven and do "inside stuff" after the long months of taking every opportunity to do jobs outside!
happy "1st advent" to all those, who celebrate it - and a nice time before christmas for those, who don't! I am finally going to put up my deco around the candle holder - to light the first candle, if rather belatedly....
Posted by Woolly Bits at 11:33 7 comments: