... christmas I mean. of course there are several gifts in the works, but I cannot show any of them... there's also material on the wheel for one - but I cannot show.... you get the drift:)
but there are also lots of smaller projects, some of them are cards: 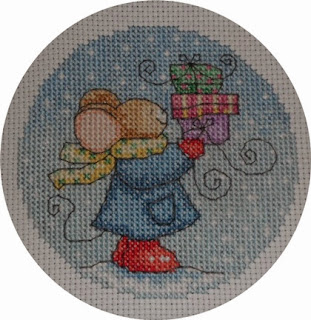 one of them has to be a mouse - every year (for the woman, who loves everything with mice:). this year I liked the embroidery better than last year! a few back stitches, but no half crosses - I don't like half crosses, esp. not on aida fabric! now I just have to find (or make) a card with a circular aperture in the right size..... 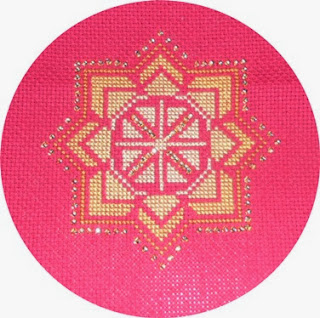 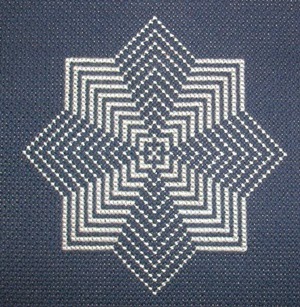 stars are easier to fit - the red is more burgundy in reality (flash colours:(). and the blue and white is similar to the one from last year, an easy motif, not much to count:) both are freebies from the Stickeule.... 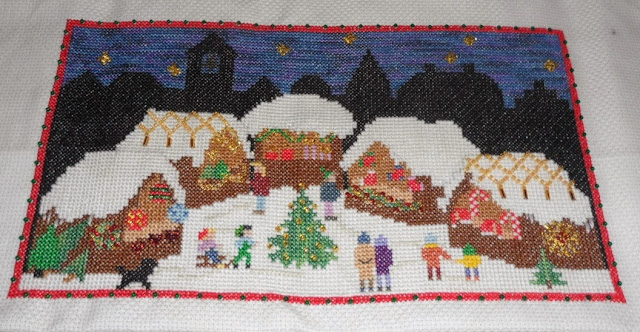 as is this SAL, which I finished a few days ago. the frame (patchwork fabric) is still missing, which means that I have to sew on the first stripe by hand - maybe I should have thought about that before I attached the small green seed beads? but I am not taking them off again now! the original has no beads in it, but I made a mistake with the second house on the left, which has a different roof colour in the pattern. I didn't fancy taking all the white stitches out, so I decided to add some beads instead of stitching the yellow "lights". and while I had the beads out, I put in some golden and red ones in instead of the rest of the christmas tree lights etc. and added a bit of glitz.... it's a christkindl market after all:) now all that's missing is some music and the scent of mulled wine! I also used some multicoloured green and blue embroidery yarns. no problem for the greenery - but the sky was a bit fussy to do. to end up with a more realistic pattern for the sky I had to work mostly single rows, otherwise the hole thing ends up quite patchy!
another christmas project is this - looks like homemade cabbages from the top? 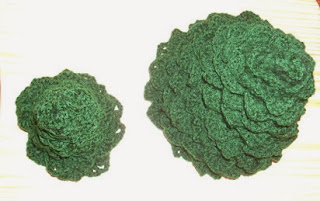 they're not - they are christmas trees:) crocheted ones. 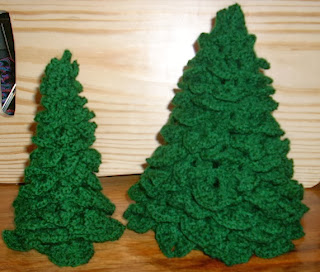 and they look better like this, I think. the first one was done with one thread of yarn, for the second one I doubled it up for the base, but the leaves looked to rough and chunky for my taste, so I took them out again and worked them with a single strand, too. all that's missing now is a nice golden chain, some "baubles" (beads?) and maybe a star for the tip? the pattern is available free on ravelry. thank you to the designer:) 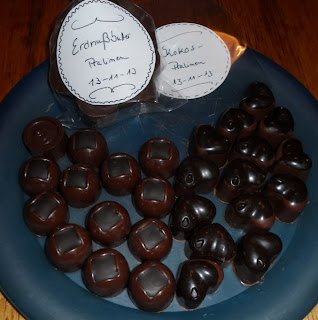 I've also been trying out a few things in the kitchen. I found 3 silicone chocolate moulds during the summer and tried them out now. on the left the pralines are medium dark chocolate, filled with some peanut butter. the hearts on the left are dark chocolate on top and homemade coconut choc for the bottom - yummeeh! unfortunately - because they vanish all by themselves somehow:) I see a few more sessions of chocolate messing coming up! 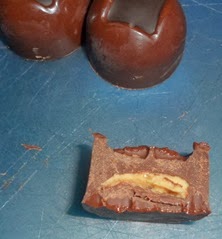 just to show that there really is peanut butter filling in them:) I think if I kept the chocolate a bit hotter (i.e. runnier), filled the mould first, swished the chocolate around a bit - I might be able to add more filling? 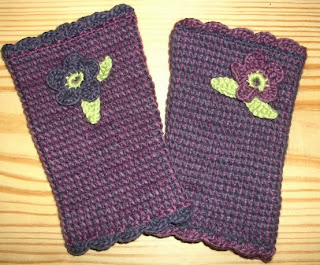 of course I've done a few fibrey things, too. those are some wrist warmers out of wool/silk blend. ever since I took part in the demo about tunisian crochet in the round - I've become "hooked":) so much so, that I ordered myself a set of 8 double- hooked needles to work faster... and yes, I changed the colours on purpose, that wasn't accidental... 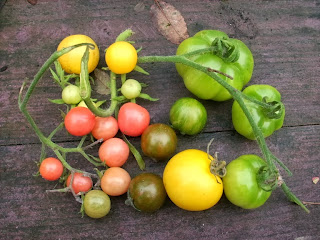 the garden on the other hand doesn't have all that much to offer anymore - no wonder, with the grey and wet weather we've had. but I picked all the tomatoes in the tunnel - and most seem to ripen quite well inside now. the funny brownish looking ones in the middle are actually ripe - they are green with dark green stripes when unripe and turn this odd colour with red tinges once they're ready to eat! I do like making tomato salad with all those colours, it looks very inviting to eat!
and now it's time for kitchen duty - see you in a while!
Posted by Woolly Bits at 12:34 7 comments:

that's what our weather is like just now! yesterday I was very lucky - lovely sunshine while I cycled to town to do our weekly shopping. today a typical autumn day: grey, very windy, leaves flying about, heavy showers - and a ray or two of sunshine in between. tomorrow is supposed to be good again - we'll see. gardening hours are few and far between now, even though I'd have plenty to do outside!
we have had enough cool and sunny days to change the colours nicely - my little japanese maple has turned its usual strong red: 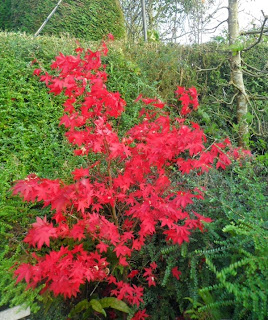 or maybe it just looks that "hot" in front of the evergreen lonicera hedges? its big brother "outside" in the garden (this is in a pot at the front of the house) has barely even turned yellow - and it only turns to light orange anyway. but in contrast to the red leaves that seem to drop all of a sudden in one or two days, the ones from the large tree turn slowly - but come off slowly, too! the sycamores all suffer from black spot disease here, which means that the leaves turn brown and drop off early, but the ash trees are still fairly green! when we have strong winds it feels like sleeping in a tent in my "upstairs" bed - the leaves hit the attic windows and make their own kind of music  - together with the raindrops. very cosy and sleep inducing for me! 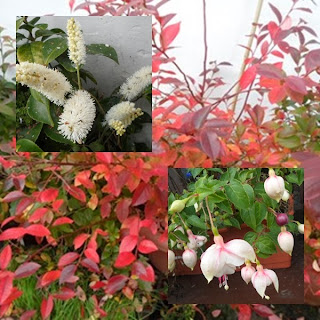 the blueberries all look very different now - two of the early fruiting varietes are still totally green, while the ones that carry fruit later are a fiery autumnal red! the colour of the flowers at this time of year seems rather "washed out" in contrast to the leaves; the cimicifuga is all white, the fuchsia only has a pinkish edge. the only two strong coloured flowers just now are the small red dahlia and my one deep purple lupin. the blue lobelias that I planted in the boxes together with fuchsias and pelargoniums are nearly gone - only a small blue spot here and there in the middle of a brown, leafless blotch:( oh yes, and I nearly forgot my fearless sanvitalias. like tiny sunflowers they keep going until the first real frost kills the tops. this flower amazes me: I never do anything with them, apart from watering. no faded flowers to pick off, no cutting back - nothing. and still they have been in full flower since spring! and they'll come back next spring, unless the winter turns really frosty (in which case I'd rescue them into the shed!). 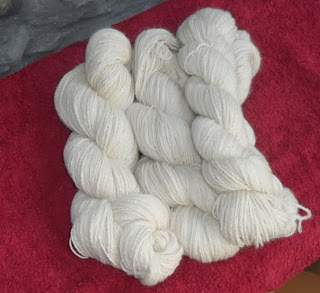 it's not all gardening though, I've been spinning the bag full of baby alpaca for ages, or so it feels. probably because it's natural white - no entertainment with colour changes etc. I will dye the spun yarn, and I am nearly done now. two bobbins full means 2 more skeins after plying, which should be enough for the planned cropped cardigan.... 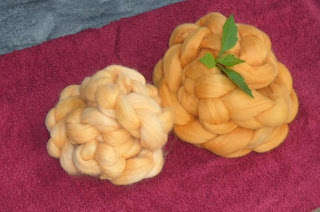 and I finally dug out all the saved dahlia flowers I'd frozen over the last few weeks. I was going to go for a stronger orange, but then decided to put all the merino I had left into the dyebath. lighter in colour, but at least I have enough to do something with it! the red pompoms were very lazy this year, so I had to make do with the blooms of a single small plant. but it was still enough to dye a lighter, more variegated shade on some teeswater top (left) in the leftover bath. I tried cold mordant for the first time - and you can really feel the difference on the fibres: no matting, as soft as they've been before! it's easy to use as well - it's dissolved in warm water and can be used by just putting in the fibres over night or even for a few days - no damage to the fibres and no more heating stuff on the stove! but for this year the only thing I still plan to dye with will be the mahonia berries I found in the freezer. but luckily there's still plenty of dyed fibre in the stash to work with - and it might not be a bad idea to use up some of the finished yarn over winter - to have room for new stuff next spring! happy spinning! or knitting...
Posted by Woolly Bits at 09:30 5 comments: