I had meant to put this up earlier - not enough time, the usual problem.... I received the ordered book about spinning a while ago, the 2nd book in the series by Gaia Craft Books. it's been written by two of my OLG colleagues, Jane Deane and Alison Daykin - and I heard about the efforts involved in getting this printed during my wpsg (steering group of the OLG) time and was quite keen to get my hands on it.

the book shows the basic "how-to-spin" instructions with drawings in the first part. everything is there, but I wouldn't have bought it just for this, as I have quite a few books about handspinning already. what makes this book stand out (at least IMHO) is the second part - with stunning photographs of the fibres used, the yarns spun and a small sample showing the yarn knitted up. and a photo of the inspiration for the yarn (or maybe vice versa, the yarn was there first? the old question about the hen and the egg?:)). each yarn is described in a short "re 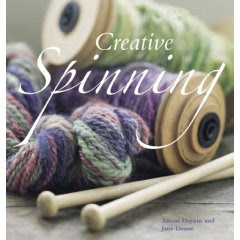 cipe", fibres used and amounts given - and then a brief description how it is spun and plied. I am sure I don't have all books about handspinning - but it is the first I have laid my hands on that really made me want to dash to the stash, dig out some fibres and sit at the wheel to start spinning some of them up! all kinds are shown, shortwools, longwools, rare breeds, silks and man-made fibres - in scrumptious colourways, some even with beads. I wonder why knitters still bother to buy commercial yarns for extortionate prices - surely it must be far more satisfying to make your own for a fraction of the price? the one downside is that I have no time to start experimenting yet - I have to finish all the xmas stuff beforehand! but as soon as that is done I'll start fiddling about - there are several rather tempting ideas that I'd like to follow up! (if you want to order it, contact Jane - jane@janedeane.co.uk - or Alison via her blog - www.willingtonweaver.blogspot.com )
Posted by Woolly Bits at 04:55 3 comments:

my hands in too many pots?

I haven't been lazing around as you might think from the lack of entries to my blog! it's just the usual pre-christmas madness - too many plans and a serious lack of hands! and I don't even have pix to show yet for the things I made in the meantime.... you just never know who might read your blog and I don't want to spoil the secret santas by putting them online. 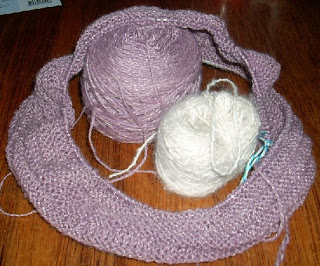 just the one here, I finished the moebius scarf with an attached i-cord. the lilac is merino with soy silk, singles of each plied together, dyed with the 2nd bath of cochenille. the white is one thread of angora and one of mulberry silk, plied together. I put in some seed beads, but they are very small and not visible on the photo. I originally planned to use bigger ones, but then thought, that the feeling of cold glass beads might not be so nice in a short scarf! the ones in it now are small and they stay in the fluff of the angora, visible but not cold on the skin. of course all threads are handspun.
the black scarf in the woven looking pattern from the fall knitty is nearly finished too, as is the embroidered scarf, two more ticks on my to-do list:)) I am left with a lot of alpaca spinning and knitting a set of hat, scarf and maybe mittens - but urgently, as the post takes quite some time before christmas. the stash shift for the OLG is sorted, all ready to be packed and sent out, puh....
in the dyeing section it's quieter at this time of the year. I dug out several bags of avocado kernels and skins from the freezer and chopped them up. I put them in several glass jars and stuck all of it in the canning cooker, as I am supposed (at least that's what the article in the spinoff some years ago advised) to heat it all every couple of days to prevent mould! I just hope I won't forget it one of these days as I am all keen on the reds and burgundy (I only bought the brown-skinned Hass variety!) and not on beiges and browns! I received a large bag of dye materials from my friend, who had planned on dyeing for years but realised that she hasn't got the time to do it all. it's mostly logwood, brazilwood and fustic, also some weld and some madder.... I tried the fibres of coconut before and didn't get anything much apart from a mucky, dirty beige - so I put those out into the garden as mulch. they didn't look inviting enough to try them for spinning - I might still need the skin on my fingers, esp. as I had planned to work with the silk hankies and the mulberry top!:)) 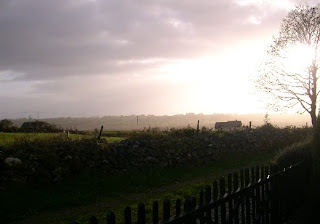 we did have a nice clear evening after a very mixed day yesterday - here is a photo I took before dusk.... the curtains of rain in the background had just moved away a few seconds earlier!
Posted by Woolly Bits at 06:02 3 comments: 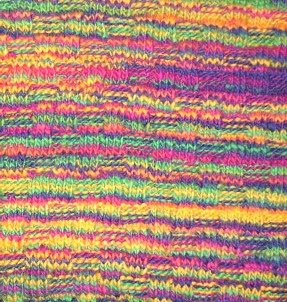 I've finished DS's new winter sweater in time - only on the calendar! no winter in sight here (yet), but he is happy and wore it all evening, even though it was quite warm inside. no complaints about it being scratchy either, not even with just short sleeves underneath. it's the kg of space from Wollknoll, nice to spin and just as nice to knit! it was a fast job as I've spun chunkier singles to keep the colour variations from becoming more muddled from plying. at first I thought of knitting just garter stitch, but I like the basket weave pattern better. it's not difficult to knit, just knit and purl, but it's not as boring as straight knits or purls! and it's quite stretchy and feels nice, so I am planning to do one each for the grown-ups in this house too - but maybe not quite in such a lively colour scheme:)) I have one skein and a bit left and plan to do a hat with it. one thing astounded me though: I wouldn't have thought that I might need 750 g to knit one kid's sweater out of it. but then maybe I tend to forget that DS isn't quite a small baby anymore:)) gone are the times where 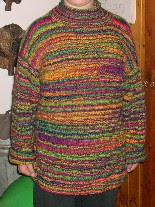 I can cast on and finish in one week......and in colours and patterns I like! I know that it looks rather big - but he likes his clothing to be wide and comfy and he's growing so fast that I am hoping to get away with it for maybe two years! the polar bear sweater out of manx and nz lamb was worn twice before it became far too small and I don't want to risk that again! I did take out the sleeves once though - they were a bit too generous in length the first time round! the one downside with this type of yarn is that it won't be a good idea to put it into the washing machine - it'll felt very quickly - and it's not large enough to accomodate a minor washing disaster:)) but then it'll be worn mainly outside during the winter, so there shouldn't be too many accidents with food stains (I know, I am the eternal optimist!)
we did go to dublin to the show - and without major problems as well! ok, 5 minutes delay on a train, that's to be expected, something I can live with. the taxi driver was waiting for us, everything went smoothly. everything but the show that is! I've said it before, but this time I mean it! to me this k&s is going downhill fast. maybe someone responsible reads blogs - if so, I wonder why an organizer of a knitting & stitching show invites stall holders, who sell ready-made leather handbags, chocolates, massage chairs, fake jewellery and - of all things - bits of artificial hair! ok, maybe I am not exactly the average customer, but if I go to a show like this would it really be so unreasonable to actually find a supplier for textile stuff, such as DMC cotton embroidery yarn? either I have gone blind - or there was none. ok, there have been a few stalls selling knitting yarns. oliver twists yarns was there (my favourite for hand-dyed embroidery threads - and also undyed silks etc.) there are the usual stalls of the irish wsd guild, the felters, the patchworkers (but several stalls that have been there e.g. for patchwork fabric, seemingly haven't bothered to come either) - all doing good work as far as I could see. there are also some book sellers, but in general I think the dublin show gives rather poor value for money (the entrance fee has gone up again, too)! I always go green with envy when I hear people talking about the Harrowgate or Alexandra palace show! of course it is down to the customers to support stalls by buying their things - but how am I supposed to do that when the stalls on offer show stuff that has nothing to do with textile crafts? I think I am going to give the show a miss next year - I much rather spend my money via mail order for goods I want than to throw it out for train journeys to shows that are rubbish! 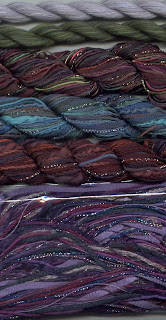 enough complaining - I did buy a few bits and pieces, lovely "once-offs" (from OT of course, the colours are a bit lighter in reality), lots of purple, some beautiful "seagreens" also. several bags of throwster's waste - I want to try out some lumpy-bumpy designer yarns. a bag of degummed cocoons, the first time I have seen those. I couldn't resist and started to draw one out on the train - my neighbour looked rather curiously, but was probably afraid to ask what I was doing there:)) I wonder how he would have stared if it had been a "full" cocoon - with a shrivelled up caterpillar dropping out! I found Nancie Wiseman's book about wire knitting and a small wooden lucet for next year's workshop in the OLG. also interweave's folk style knitting book - I had been keen on that one. and from the newly published Gaia series I bought the book about natural dyeing (the sister book about handspinning by fellow OLG members Alison and Jane is still in the post) - nice to look at, lovely colours and photography, though probably best used by beginner dyers as I didnt' really find new information on closer reading.
was there anything else? yes, two replacement bulbs for my daylight lamps - not available in the normal shops here. but that was it really, compared to other shows a few years ago - next to nothing. the only solution here - buying by mail order - again!
Posted by Woolly Bits at 15:26 2 comments: