.... I can't believe that it'll only be another 2 months and a bit - and it'll be Christmas! maybe it's because the weather has turned mild again after a few colder days? it doesn't feel like winter - though the leaves have pretty much fallen. I love my little japanese maple above. the colour changes from green with a slightly red tinge to this fiery red within a day or two! unfortunately that colour won't last long either - another week or so and it's bare - like now. there isn't much colour on the patio left, apart from the few red leaves on the blueberries it's only a bit of green and nothing else..... I am always envious of gardens in the subtropics at this time of the year - but then I'd have to suffer their heat during summer as well, so maybe it's all for the best😏
the good thing about the change in season is that knitting weather is back! I mostly spun during the summer, knitted only small bits and pieces, mainly in cotton - but now it's time for longer evenings inside in front of the wheel or with bigger, woolly knitting projects in front of the TV. and it's high time, too - the christmas gifts won't knit themselves!
I also finished the one skein of autumn colour I started at the WWSIP last month. I grabbed everything in yellow, orange, red, some lighter green and a bit of silk - to make rolags on my blending board. 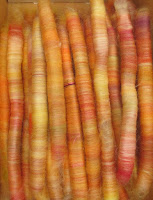 ...to pretty rolags only takes a little while. but what a change!

...to this skein. it looks like a lot, when you have a shoebox full of rolags, but spun up it's only one skein after all! I do like the colour though - it'll be a good choice for "autumn", when I put together some advent calendars I want to use as gifts.... 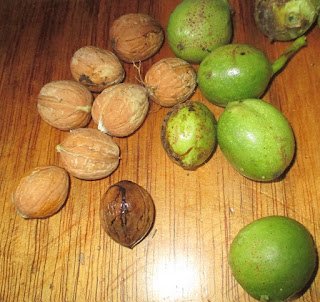 to our great surprise we had our first walnuts this year! the tree is huge, but never did a thing before - maybe it's down to the for us warm and dry summer? anyway, I got all excited - not because I like walnuts (I do:), but because this was the first time I was able to use the green hulls for dyeing! of course I didn't wear gloves, when I found the nuts - so by the time I was inside again my hands had turned a lovely, deep brown already. no need to start wearing gloves  for peeling and chopping, but I had brown stained hands for two weeks or so:) good thing I don't work in a kitchen or restaurant! 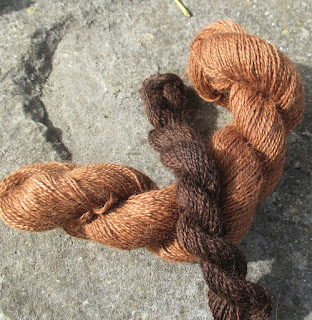 I had mordanted about 500 g of teeswater top already, because the original plan was to pick reed flowers to dye green. but either the weather was too bad to wander down to the bog - or I was busy with other things. there's no need to pre-mordant for walnuts, but it doesn't do harm either, so after simmering the nuts I immediately dumped a small bit of fibres in that hadn't taken up any colour in a dye bath with purple fungi! look at the full dark brown of that small skein! I added a second batch into the dye bath, about 100 g this time - and it's still a lovely shade of brown - even though I am not usually a fan of beiges and brown! I did do a third batch, which ended up a teddy brown - but I haven't spun that one up yet. a lot of colour for the hulls of about 30 nuts! I do hope for more in the coming years..... one good thing coming from climate change? 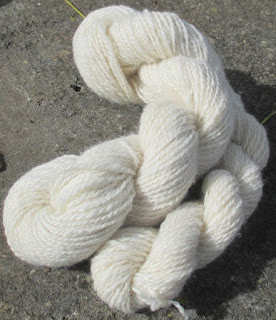 I am also still trying to spin up my fibre stash! this came as a huge white cloud (batt), 25 % cashmere, 75 % "himalaya fibres". it was a gift, but I assume that those fibres are very soft wool... it's nice and squishy - good for next to the skin items. I also learned to spin long draw with this fibre - works like a dream.... because it's so fluffy it's fairly thick for me - I tend to spin thread rather than yarn most of the time:) 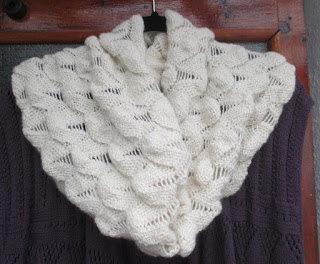 some of it I turned into this cowl. the german pattern is called  Teufelszwirn,  devil's thread, named after a plant, has nothing to do with the devil, bad vibes or anything like that! the cowl is knit in a lacy pattern, but the holes of that lace come out in unexpected places - and the cowl is worn inside out! the effect is rather 3 D - easy to knit, but I hope nice to wear for the recipient as well..... for me that cowl would only be wearable in the coldest of winter, but then my friend lives in Bavaria, where the winters are usually colder than here! (the pattern is available in english now!) 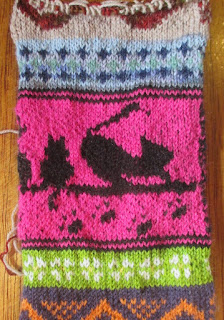 for my cold winters I am still working on the second part of the scarf for my scood! on the first side there are dogs at the bottom, so this side needed some cats. I adapted a chart I found online, with a few paw prints at the bottom. I still want to knit a Harry Potter inspired cowl, but I couldn't resist adding "dolores umbridge" colours to this one:)
the next pattern after a small peerie is going to be owls - which are nearly finished by now. only in hindsight did I realize that owls would be a good HP pattern as well... not sure what I'll knit up next, maybe frogs? or spinning wheels? or some graphic pattern? to be continued.... 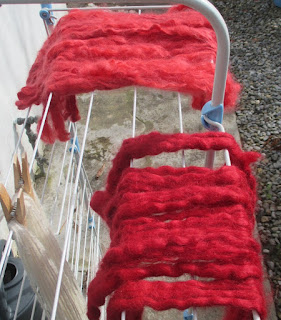 and to make sure that I won't run out of spinning fibres any time soon, I used up the rest of the mordanted teeswater by dyeing it brazilwood red. I like madder reds, but they don't suit me. brazilwood reds however are "blueish" reds, which I can wear much better. this batch isn't going to end up as a garment though - I am still dyeing more teeswater for my "Persian Dreams" blanket! I still need blues and maybe some stronger greens, and of course enough spun yarn for the basic colour, though I am still not sure if that should be left natural white - or dyed in a darker colour? there are lovely photos on ravelry - but they make it harder to decide which colour to choose!


the brazilwood comes in powder form - which I inherited from a late dyer friend, who sent me a kg of it last year. I am going to be very mean with it, because it's next to impossible to find anymore after the ban on brazilwood, but I did need to check if it was the real thing - or a replacement, some of which only give apricot or light rose tones!
the other "problem" I have right now is that the same designer published a new pattern - at least as stunning as the persian dreams! it's called Indian Nights and I think it's simply spectacular! I get itchy fingers just by looking at it:) and I could even make one for our own sofa, because the dogs don't seem very interested in it anymore, after we exchanged the very old bottom cushions for new ones. it's not cheap in the original yarn, but then it's not a pattern for a quick knit that goes out of fashion any time soon.... I am extremely tempted:)

but before all that I have to make my last batch of blackberry jam - so off to do kitchen duty!