after several days of really yucky weather with torrential rain, storms and frost at night today is a quiet sunday. earlier the sun peeped out for a bit, but we have more rain in the forecast for tomorrow and the clouds are already gathering... never mind, the weather after tomorrow is supposed to be "picking up"! hope dies last:) of course a few days of nice weather and the daffs think it must be spring. they are blooming everywhere and all nearly at the same time - and I think there'll be none left to flower around easter as it is so late this year (they are called "easter bells" translated from german - but over here they're usually gone by then!). 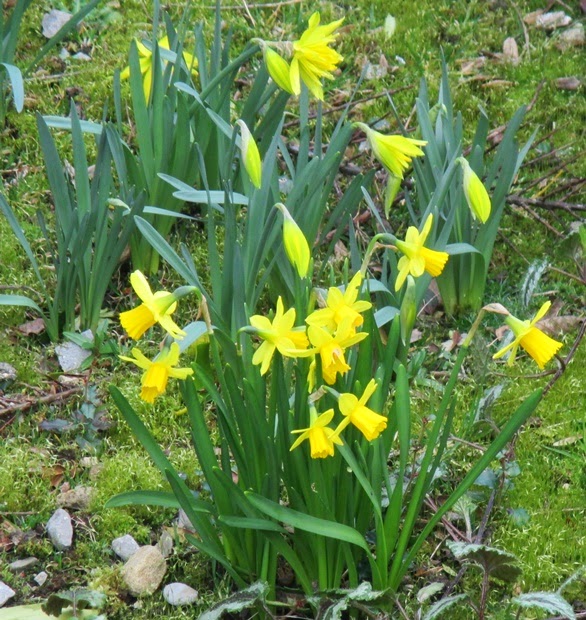 I love all the spring flowers, but in contrast to tulips, which only flower really strongly in the first year (unless you dig them out and replant them) daffodils increase without me doing anything about it - perfect for lazy gardeners:) pity that the muscari aren't flowering yet, the "swedish" look with yellow and blue gives the flower beds a real boost! the only downside to the long-stemmed daffs is that they break easily in our strong winds. I just spent a nice 15 minute break in the garden, collecting all the broken ones to put into a big bunch inside! they are so cheerful - even a hole in the flower from a greedy slug can't change that! 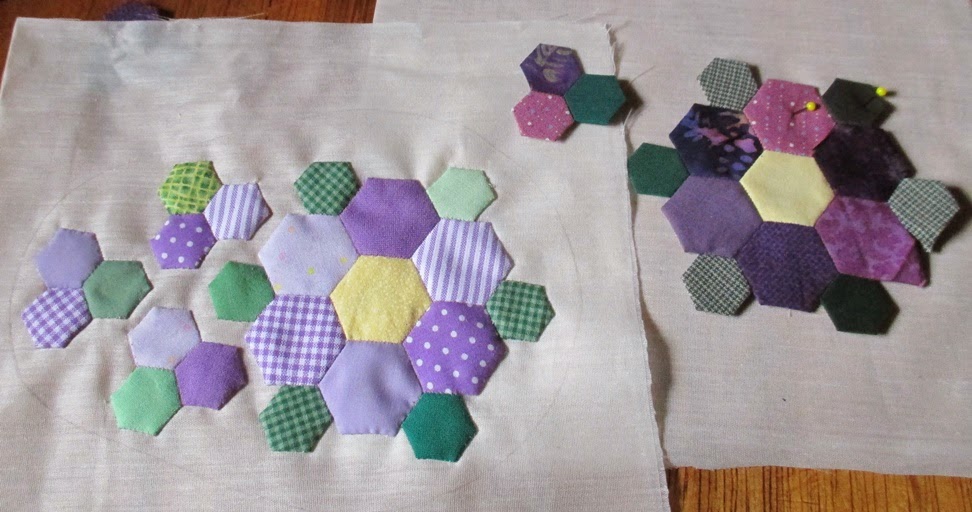 I am also doing other flowers, the "grandmother's flower garden" kind! I checked through my stash to dig out fabric for a larger project - and couldn't resist making two smaller mug rugs first. of course eedjit me sent the finished ones off before taking a photo. I made them "egg-shaped" with a bias-taped edge in green....  I bought thermolam as wadding for potholders last year, but it worked nicely for mug rugs, too. it's heat resistant, denser than normal wadding and not too thick - I did all the sewing by hand and it was very easy to work with. 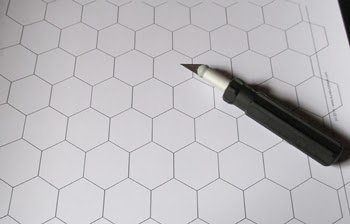 this is the first step for the bigger project! I am going to need about 1100 of those for my idea! couldn't get the 0.75 "easily as pre-cut, so I took thicker paper and copied 25 pages of them... a lot of cutting involved, but luckily I don't need all of them before I can start! we have our craft meeting next saturday and I plan to have enough hexies prepared to do some sewing. I don't want to make a very orderly flower garden, I'll include some partial flowers and a lot of different greens in between (have to order more fabric for that of course....:) to make a square table cloth out of it. the first 300 are cut! 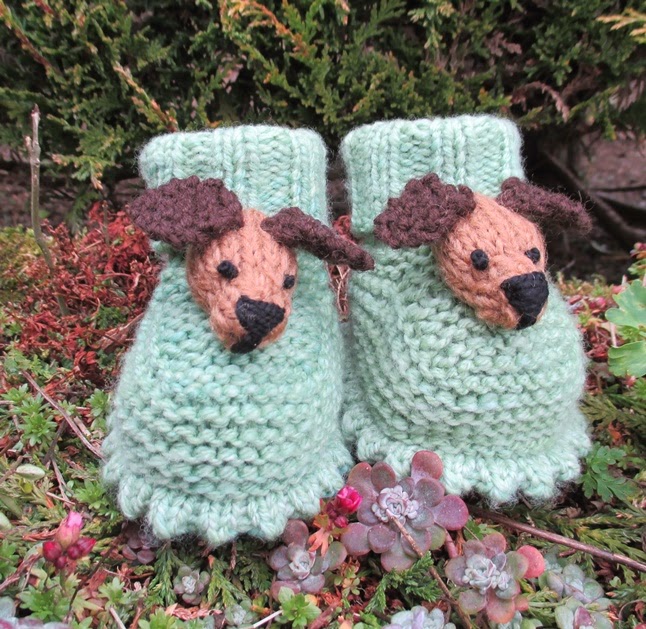 I also finished the baby booties - as usual knitting the base was done in an evening - fiddling about with the dogs took ages... to make them stand up nicely - I filled them with kiwi fruit:)
the green is much more yellow in reality though.... 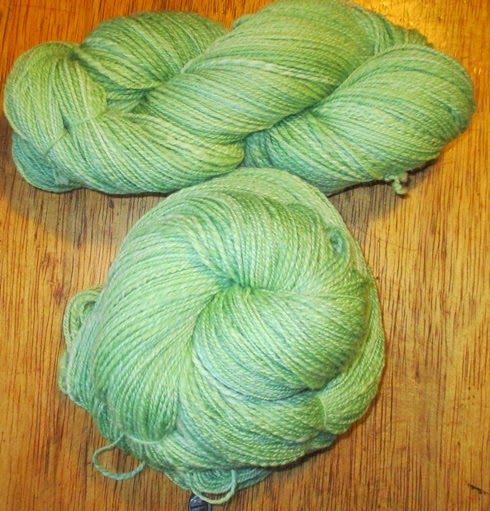 ... this comes closer, esp. the upper skein. I am just spinning the last bit of the fibres, two skeins are ready to go for the baby cardie. I think I won't double the yarn up as I did for the booties though - or the sweet pea pods will look like broad beans:)
I didn't finish the baby alpaca cardie yet, so the sweet peas have to wait a little while longer until it's finished. no pix yet, don't want to spoil the surprise for the future owner:) 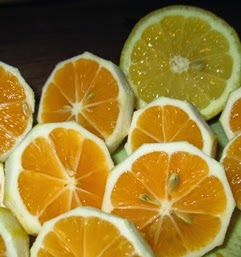 on one of the rainy days last week I finally used up my own lemon "harvest" - I made jelly out of my 7 lemons. I gave one each of the irish bio lemons to mother and mil (as proof that there are home grown lemons available in ireland:) - and used the rest with a little bit of "help" (aka lemon juice) from 3 shop bought ones. I cut the peel into very fine strips and simmered it with a bit of water for a while. it turned a very deep yellow! then I used the peels, all the juice and slices of the smallest fruit with jam sugar to make the jelly. it's very tasty - not really very sweet, but full of aroma! perfect on a fresh buttered roll - yum!
and now I better get started - I have to iron a gazillion of little fabric pieces to start the patchwork! and finally get out the order for more fabric, esp. in greens....
Posted by Woolly Bits at 10:44 7 comments:

.... doesn't make a summer! not sure if there's a saying like that in english, but one nice day in march doesn't make it spring either - that's definitely true! we had two quite nice days yesterday and the day before - but today we were back to grey, drizzle and wind:( the crocus flowers look sad and droopy and everything is dripping wet:( everybody seems to be waiting for spring to arrive and I hope it doesn't stay cold for as long as it did last year!
I should really be working in the garden, but apart from the occasional hour or two I haven't been getting anywhere - the ground is soggy and with only 8 to 10 deg. C sowing seems to be a bit early. luckily I still have many textile jobs to do inside. I did finish the mice potholders - but I still think that the design would have looked better with less "rain" above the mouse and more leaves etc. below. 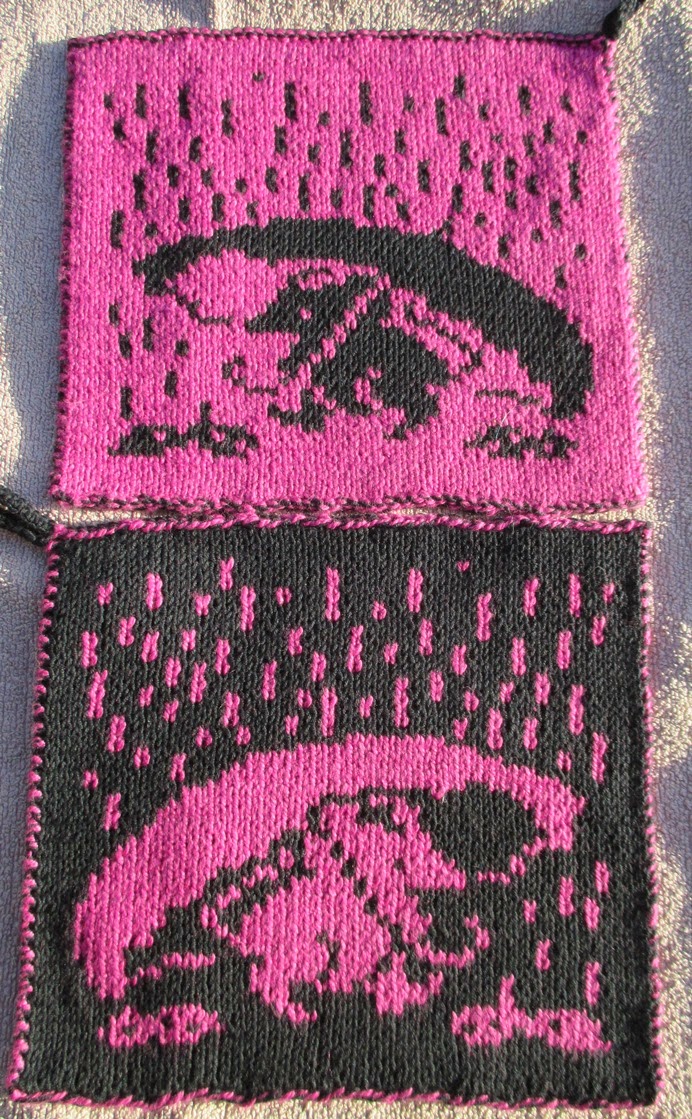 I have to say though that the pattern is far clearer in the photo than in reality. when you look more closely it's harder to see the separate colours, even though the contrast between black and pink should be clear enough.  the next potholders (another gift) will be black and white  and of course double-knitting - but I am not sure about the pattern yet. black and white should go well with graphic patterns, but somehow they all look rather "cold" to me. maybe I should do a contrast - black and white plus some ornamental pattern? or irregular lines and shapes? still in the thinking stage with that one.... 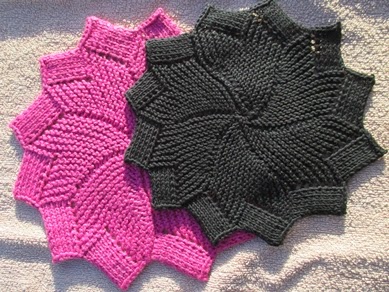 I also made a set of dishcloths with the same yarn, partner look in the kitchen:) with the pink one I followed the pattern and didn't wrap the stitches for the short rows. in the black one I wrapped the short row stitches, which gave it a neater look without the "holes" in the separating rows. when I put both of them together, they looked like a nice flower and the recipient was rather reluctant to see them as dishcloths - she thought they're supposed to be a brooch:) 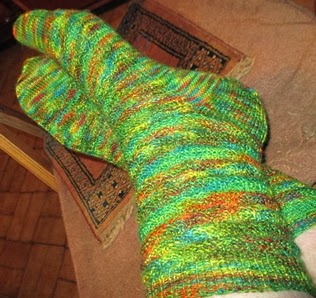 while I  worked out the patterns for the next two larger projects I finished another pair of slouch socks. this time I used only 2 stitches and two rows: 2 rows of 2 k, 2 p. 2 rows k. 2 rows of 2p and 2 k, followed by 2 rows of p. I like the crinkling the patterns forms, very comfy for slippers (maybe not so much in shoes - not nice when the leg slips down). I call them flowerpower, because they remind me of greenery in the garden with flecks of colour for blossoms.... and just now, while I am writing, I thought of all the sock charms I bought - maybe I should attach two of them to these new socks? hm, ladybirds? bees? are there dragons in a flowery garden?:) 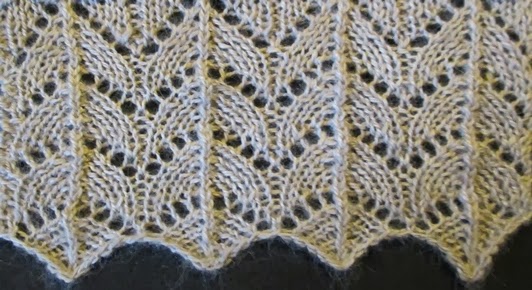 this is one of the gauges I made. it's the horseshoe pattern I mentioned in the last entry, simple to knit, and it forms a nice lower edge. I changed the middle stitch to make it less prominent (actually I just follow the original walker pattern in the project, I had changed that stitch for the gauge!) and I'll finish the bottom with a narrow i-cord; for that I started with a provisional cast-on. it'll be a short cardie, but with long sleeves. 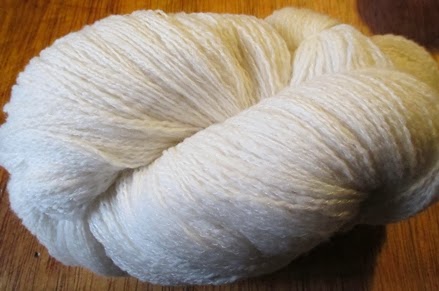 of course I also spun some more yarn (I think I love knitting - but I couldn't be without spinning for long). this is a sample (100 g) of polwarth, which I ordered with the angora/silk top. spins nicely, very soft, but not as cottony as fine merino; it has a bit more "grip" to it. I plied it with fine commercial silk - not sure if I'll eventually dye it or not. for now I leave it as it is.  I didn't  measure, but it's quite fine; I'd say lace weight - and weighs 125 g now. should be enough for a smaller lace project? 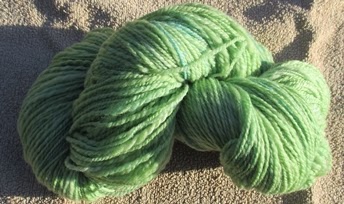 I also started to spin the superwash wool I dyed light green with gaywool dyes. it's not my favourite fibre to spin, but I have to admit that the finished yarn is very soft and squishy - and washable, too! perfect for the "sweet pea" cardigan, but first I have to spin some more. I did use part of the first skein to make baby booties though, couldn't resist it. anyway, I have to hurry with those - once the kids are up and running the booties are quite obsolete.... 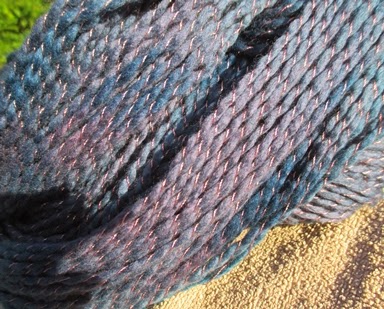 and then there was the "purple" dyeing. I had spun up about 800 g of grey wool/silk blend and plied it with a fine pink viscose yarn. but somehow I didn't like the contrast of grey with pink once I had finished. so I "brewed" a blend up blue and red - looked a nice purple in the pot to me. it still looked purple on the yarn while in the pot - but turned out to be more blue than purple, when the yarn was finished. only a few spots had take the purple... odd, but I still like the look of it. 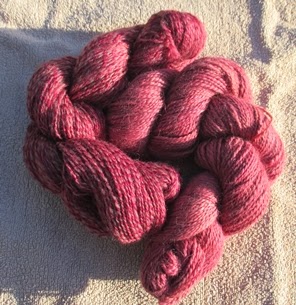 the weird thing happened, when I added two more skeins (one baby alpaka, right, one merino/silk, left). expecting them to turn out like the above - I was rather surprised to not see a hint of purple - and neither any blue - but red! I have no idea what happened in that dye bath - and people say natural dyes are unpredictable:) both these lots were in the same bath as the purple superwash I showed in my last post!
but luckily all the colours turned out nice, so I am happy. I have a skein of fine soy silk that would go perfectly with this, and I am thinking about making a three-ring cowl with it. not sure if I should really take three similar shades - or the two reds - and one contrasting colour? first I have to finish the two cardies though - and there's a big birthday gift "in the making" as well. or rather in the planning stage, but I don't have endless time to finish, so I'll better get going with that one!
﻿
P.S. I added a recipe on my recipe page - is it normal that there's no empty open comment form on the "pages", so that I have to add the new recipe below the older entries???
Posted by Woolly Bits at 16:34 9 comments: