.... to show you what arrived in the post for me today (apart from the new piecework and the new journal): 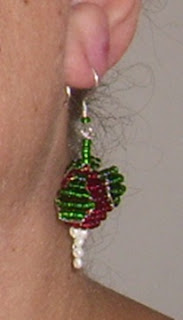 I am walking around as Luna Lovegood today! my niece has been trying out different beading techniques and when she showed a strawberry on her blog, I asked her why she doesn't make radish earrings like the ones Luna Lovegood wore in one of the HP books/films. I didn't expect to find a pair in my post:)) DS thinks I am slightly loony (very befitting!) - but so what? ok, age, shape and hair are more Hagrid than Luna - but never mind.  thanks Sandra - great fun:))
Posted by Woolly Bits at 04:38 5 comments:

as I said we had visitors = not much time left for textiles. but I did start on toe-up socks (Laidman's changeling in schoppel zauberball "berry") before they arrived - to show how to knit them for the sock knitting demo at the museum in castlebar. I managed the foot part, but knitting the cables while playing cards (ok, during the breaks, when others shuffled the cards:)) wouldn't have worked, so I finally started this dishcloth. 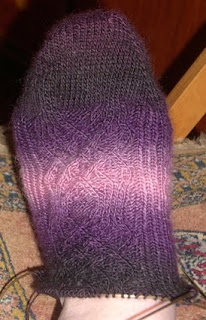 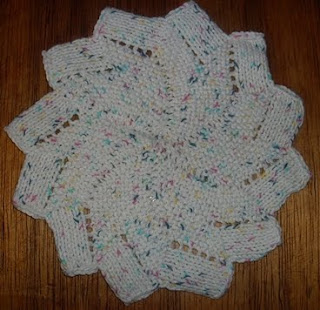 the rows start with only 20 stitches, perfect, if you have to put your knitting away after a minute or so:)) I actually managed 1 1/2 of them - which proves that we played cards a lot!
my acid green spring leaves scarf gained a few rows as well - but there will be a few more tv evenings left before it is finished. spinning was in short supply - one morning I dragged the Louet out into the sunshine, together with the big bag of Akita Chiengora - only to rush inside 5 minutes later, when a hefty shower came down:((
I did however finally take the pix of my not too successful attempt at irish solar dyeing. here they come: 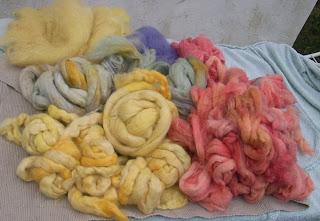 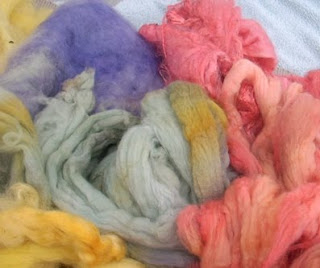 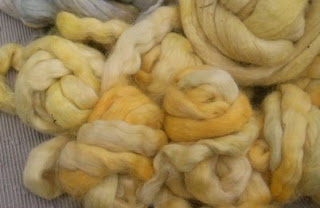 the upper photo shows all of the results. the middle shows the stronger purple (no surprise as it was a gaywool dye, not a natural one),  but the added red dahlia left nice orange-yellow blobs in it. and the photo at the bottom shows the different yellows with fireweed and galium flowers - and the much stronger dahlia yellow/orange again. on the whole the colours aren't bad, though I had to help them along with heating them up on the range. I should have put the jars out during the sunny few weeks we had - I know, mea culpa. but I think solar dyeing works better in wamer climates:))
I also should have known better than to put brazilwood directly onto fibres - I'll have a hell of a job to pick the leftovers out, even though I already shook/picked out as much as I could after drying. some dyes didn't really show up at all: the (too old?) dried walnut hulls and the lovely "black" violets among them. well, another year, another try maybe?
for now I am back to "normal" dyeing: the rhamnus berries are ripening and I am going to pick the black ones for my first dyebath - on silk, where they give very lovely blue tones....
Posted by Woolly Bits at 04:31 5 comments: 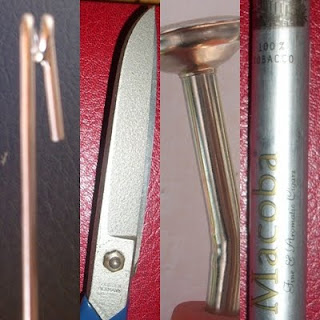 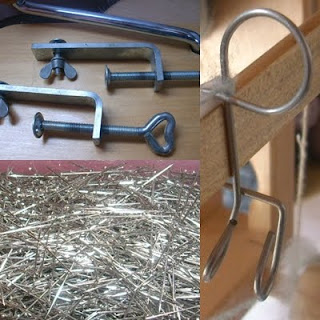 we had visitors and I am way behind with uploading colour pictures. instead of rushing around trying to snap whatever is missing - I just drop those that are missing - and continue with the one for this week (at least I think silver is the one!).
silver - isn't available in my garden and neither is it in my stash as a textile. ok, maybe one piece of grey, shimmery silk would match "silver", but when I looked around in my wool room, I realized that many of my tools show this particular colour - or at least parts of them do. on the left you see the hook of my ball winder, my fabric scissors, the spout of my sprinkler (used for wetting felt - or, horror - my ironing:)) and a metal container for cigars. no, I don't smoke. and I find the smoke from cigars even more revolting than the one from cigarettes. but the container (found in the recycling center) holds my felting needles, very useful it is!
these gadgets are just as essential to me - the clamps to fix my drumcarder (and the crank is visible in the uppermost part). the pins I use for making bobbin lace - and probably the most important gadget to me: the leader wire of my lendrum upright - in constant use, not to be missed!
Posted by Woolly Bits at 04:08 1 comment: