I don't like mobile phones - in fact we refused to buy one for years now (they are an ecological nightmare as well as unnerving to non-users)! unfortunately people slowly but surely are pushed into buying one as services once thought of as being essential are now vanishing, because nearly everybody owns a mobile phone (it's the same with the internet - much as I love it, I hate it when companies stop producing printed catalogues and put everything online instead. ok, if they collect everything into a downloadable file, that's fine with me - but I just don't like browsing the net for hours! and yes, I know that catalogues need paper...). we have been stuck at the train station in Ballyhaunis several times now, because there is no public phone inside it! unbelievable? yes, but true! if you need to call a taxi to get home - you either have to have a mobile phone or walk down main street several hundred metres - to reach the first public phone! that doesn't sound so bad, but only to someone who hasn't had to carry very heavy bags in pouring rain down that way - only to discover that the phone is damaged and won't be repaired any time soon:(

well, to make it short - we finally caved in and bought one of those gadgets. mind you, it's in a box here and we don't use it. and it won't be unless one of us goes somewhere, by train or bus. I still can't see why people with a perfectly good landline make phone calls at home on their mobiles!! it costs a small fortune - as we discovered now that we have one, too!
but of course as a craftie you cannot run around with a "naked" mobile phone - or even worse, a ready-bought cover. so I decided to go back to my leftovers of naturally dyed lambswool yarns. as I did before I knitted and felted a cover (I did one for the digicam and one for DS's Nintendo).
this one is "with a certain twist" but I won't write about that on the blog:) I find that knitting with two colours and carrying the 2nd yarn on the back makes for a thicker felt - that will cushion the mobile better. I knitted it in the round, apart from the flap. I finished it with an attached I-cord and a loop for a crocheted, then felted ball-closure. the strap isn't very long as it isn't supposed to be used to carry the pouch but to fix it to the handle of a larger bag. gone are the brick-sized mobile phones from a few years ago - the new models are so small that you have to turn your (or at least my x-large:) bag inside out once it vanishes inside!

the pictures show before and after felting - I put it into a normal wash cycle - with washing powder. I had that effect before, red (brazilwood) changes to purple, purple (logwood) changes to grey. I had to choose a colour scheme suitable for sensitive males - if you share the phone you have to be careful:)) pink, red or yellow just won't do.... 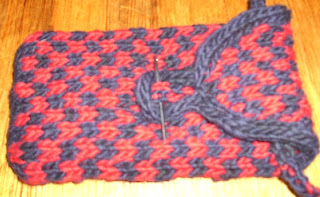 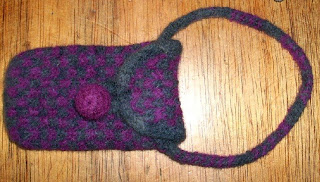 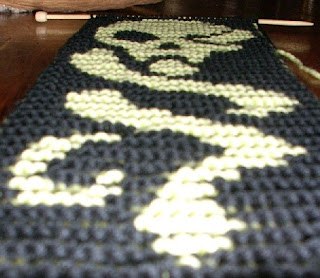 I just couldn't stop - I had to finish the first third of the "dark mark" pattern! it knits up quickly - and looks spooky enough for DS to be delighted:)) kids at that age (10) have a liking for anything gross or ugly! well, I don't find the pattern ugly - though I don't usually wear green in that tone. but for a true HP fan it's a must - or maybe I should re-design and knit another one - in gryffindor colours and with a hidden prancing lion?:)) anyway, the middle part will be less interesting - and I have to ask first if the intended owner would like more green and black stripes - or only black ones... and what about the fringe. with fringe, or without it - or only black?? I'll better wait - he has rather definite ideas about what it should look like - or not!
I also have to browse (what hardship:)) a bit more on wollpoldi's homepage - the desired sock wool has arrived - and I want to stock up the order to fill the postage properly! it's not easy to decide - if no project is planned yet!
Posted by Woolly Bits at 07:37 No comments: 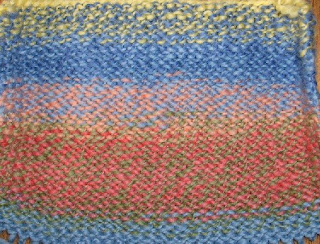 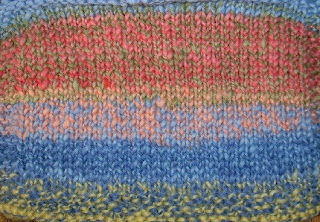 difficult decisions have to be made! I tried the spun sample of "hummingbird" colours, but I am not so sure about its looks when knitted (or purled?) up. I think all in all there is too much of the red in it! I took the same proportions of colour I used in the shrug, but either due to the different intensities or to the way I spun - the red stands out too much for my liking. so what do I do now? take less red and more yellow and blue? or change the plying? or both? anyway - I think I like the purled "species" better - but I might change my mind once I have changed the proportions. another spin sample - followed by another knit sample! who said life is easy:))

something else has been more successful - I finally started on the "Dark Mark" scarf - a pattern I downloaded from the net. I have read about shadow knitting, knew how it basically works - but haven't done a project with it yet. as you can see on the left, the pattern looks like basic stripes from above - more or less. and it's only knitted with one colour in each row, stripes, changed every second row. but - when you look at the knitting from a different angle - you can already see the pattern, the coiling snake head and it's tail! that's a fun thing to do - I am definitely going to try it on something else, once the scarf is finished! it looks complicated, but it isn't - every RS row is knit, the pattern only forms in the WS rows! and it's all done in knit and purl, no colour changes or difficult stitches. basically what happens is that the purl stitches form "hills" and the knit stitches "valleys". the two black rows echo the green ones in that you purl the green pattern in the WS row and knit the black pattern stitches on the WS row, too. this means, that the black "valley" stitches aren't visible from a flat angle and the green "hill" stitches stand out - simple. as usual the written description sounds slightly lunatic, but once you knit it becomes clear.... and it knits up fast - the yarn (half merino, half polyester = soft, but washable) is knit with needle size 4 mm - I did 1/4 of the patterned area this morning! the question now is, will the recipient (DS) wear it to the premiere of hp film 6 in november?:)) 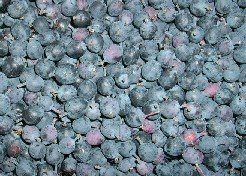 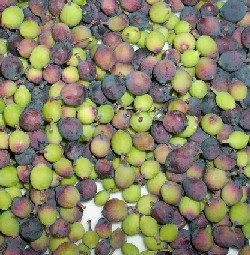 on the dye front I picked two lots of berries from Berberis darwinii - they looked so tempting, like blue grapes with a bit of a bloom on their skin. India Flint mentions them in the book - so I had to use them:)) the new bible or what? I froze them, separated into ripe and unripe (more or less) to see if there's a difference in colour later. we have quite a few of the shrubs and all of them are covered in berries, so I'll pick some more over the next few days. unfortunately the shrub is a bit mean - below each leaf whorl there is a whorl of thorns, which makes picking painful, because the branches aren't easy to hold still:(( well, every cloud has a silver lining - as long as I will end up with a nice colour later that is!
Posted by Woolly Bits at 11:54 3 comments:

next project - baby on board!

I am nearly done with the first of the two chenille pillows - so I decided to work on the next project. this will be first spinning, then knitting of something like this - the baby gizmo from the last post! 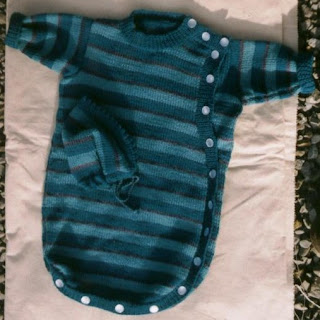 a friend is expecting her second child and I wanted to redo the pattern anyway - because the first time round I forgot to take notes! so I started spinning a colourful yarn for this. the fibre is nz lamb, soft and cosy and I hope the right thing for a baby! I dyed it with the leftover gaywool dyes I had mixed for the "hummingbird shrug" (bought from Derryaun Crafts). they turned out a bit stronger than on the silk, but I still like them (not for myself though:)). I am just not sure if I should keep spinning and plying like this! I took off shorter strips of top and divided them lengthwise into four parts. I then ordered them into a sequence and spun the same series 4 times, until the bobbin was full enough. I first thought I might navajo ply, but the yarn has quite some loft and I didn't want to do a 3ply as this would have been too chunky! so I simply plied half of it with the other half and this was what happened:

rather colourful? well, yes, but then who said that babies should wear pastels all the time?:)) anyway, I read that babies can't really see the pastels we often dress them in! I guess before I go on spinning I am going to do a quick knitting sample to see how it looks in stockinette.... after that - it's either back to the wheel full speed - or back to the drawing board as they say! I could also spin a reversed sequence - so that most of the colours fall together with their counterpart (ie. blue with blue etc.) when being plied. we'll see....
Posted by Woolly Bits at 15:29 2 comments: