... better weather!
I should be working in the garden most of the days by now - but we have our spring monsoon time again, i.e. heavy showers or straight rain most days:( every time I put my nose out I get wet - which is quite annoying, because there would be so much to do. the soil is soggy and only the weeds are growing.... I have to admit though that I blamed the tulips for a no-show - and all I would really have needed was a bit more patience, because they flowered quite nicely, just later than I expected:) pity that they don't bloom together with the daffs, which would have been quite the spectacle in the flower beds! 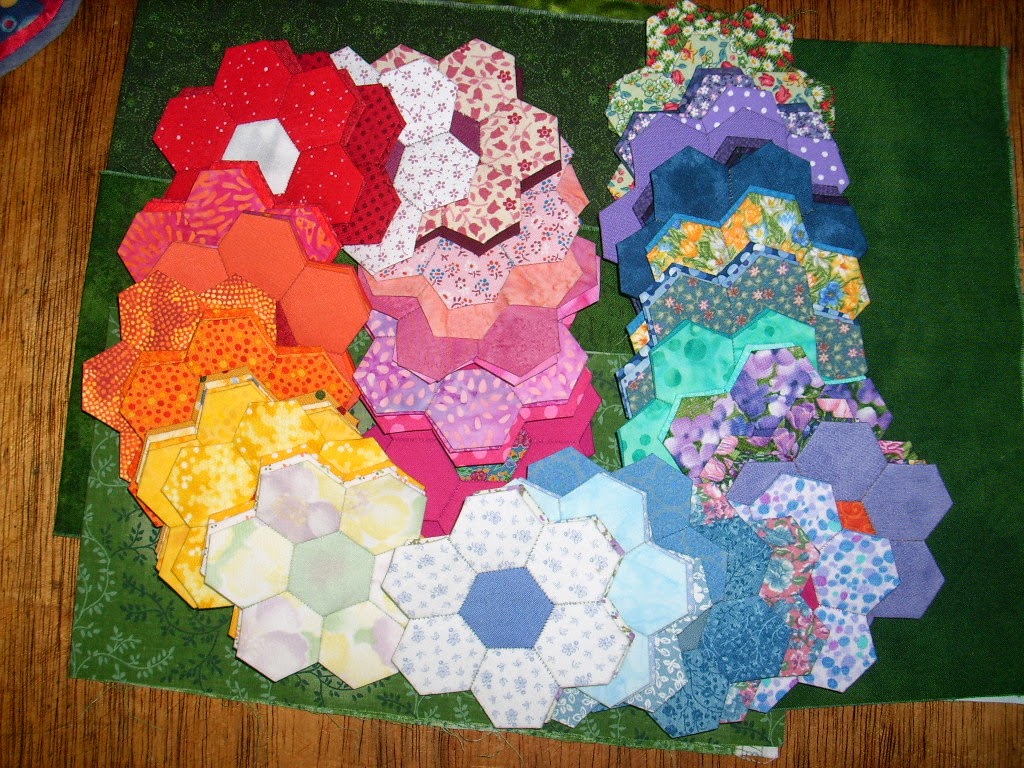 at least I had sunny colours inside - when working on my flower garden tablecloth! by now I have more than 100 flowers and quite a few "doubles", only about 20 or so to go. not to mention all the greens in between of course:) 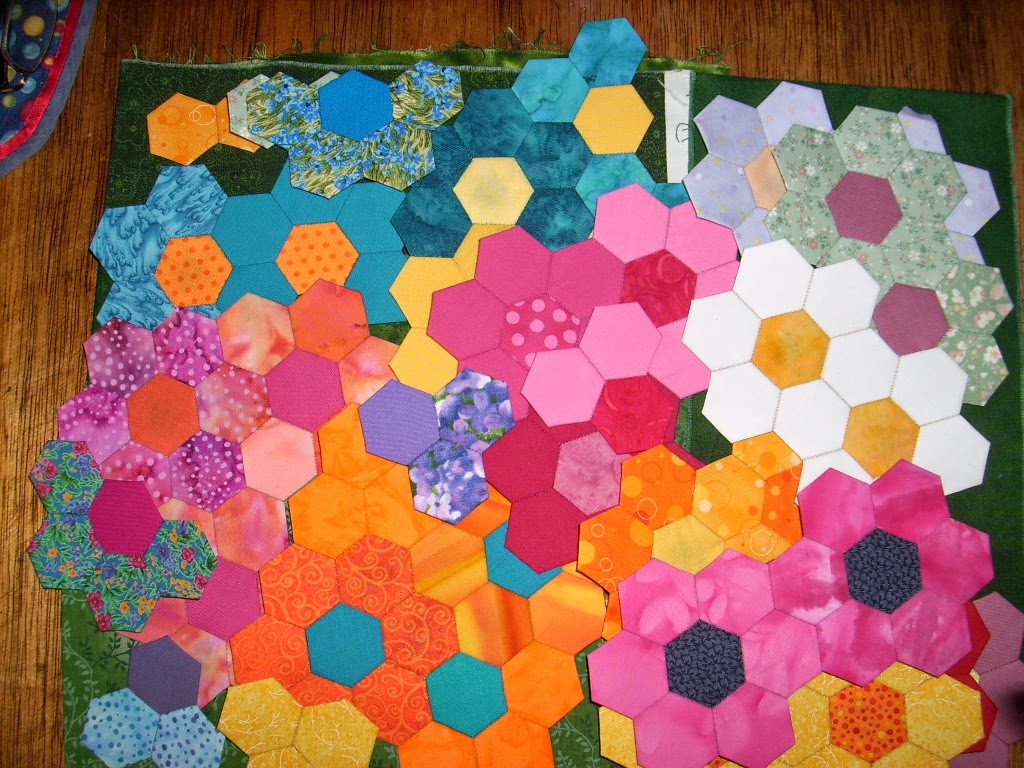 I don't want just full flowers, I like it better if some of them overlap, have buds or are closer together without green hexies to separate them, so I put some suitable colours together. as you can see some are quite bright:) most of the greens are more muted, which will bring the brighter colours down a bit, I think.
I already cut half of the green fabrics, but I still have to fold and "stick" them, before I can start putting everything together. 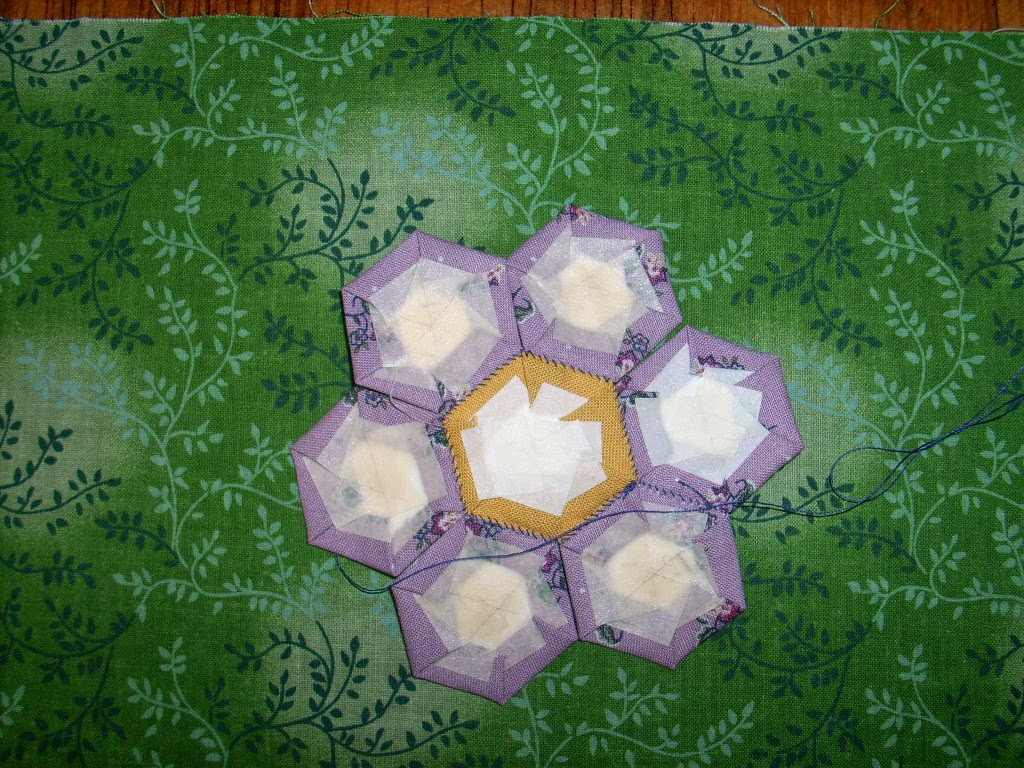 and yes, I do really just stick the fabric around the template with masking tape. there is "low tack" masking tape available, which holds together the fabric, but won't leave any residue on it. it might not last long enough, if you plan to do the quilt of a lifetime - but I have to work quickly anyway (deadline looming), so it suits me fine. and the paper templates are re-usable two or three times! which is good, because it saves me from cutting everything out again for the 2nd planned project... 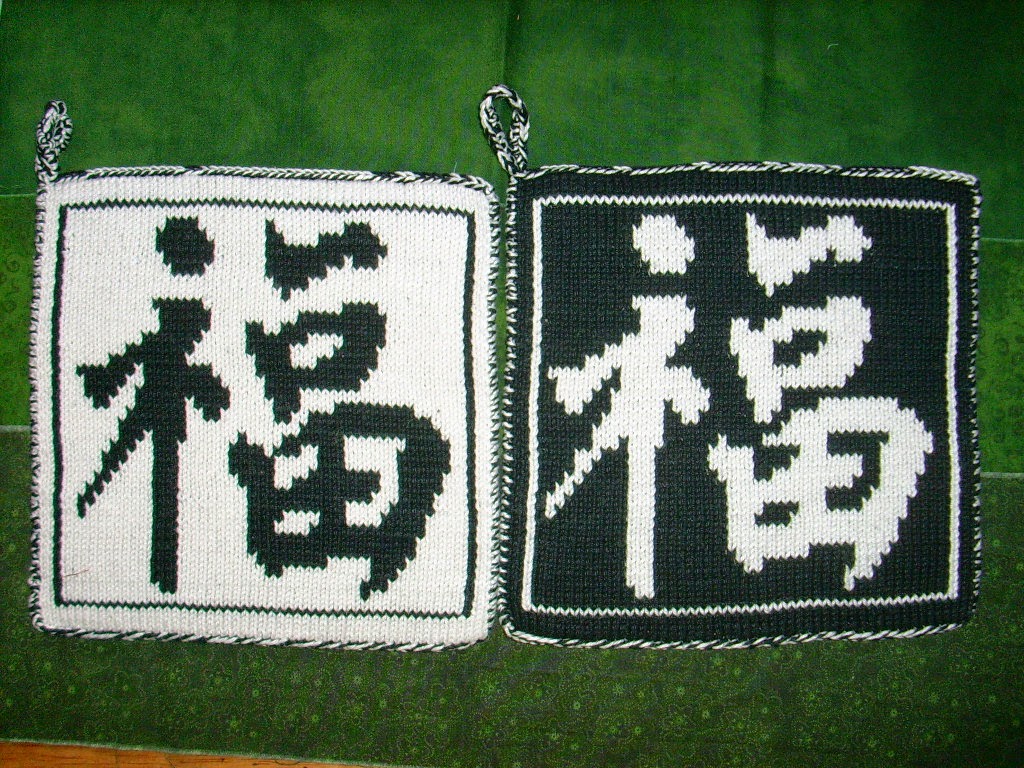 I only sew, when I sit at a table - which doesn't work in front of the tv for me. I usually either spin or knit there... I did spin a skein of dark grey, three-ply gotland, but haven't taken a pic, not very exciting anyway:)
I did knit some smaller projects on the side, when I had to stop with the beige cardie (which only needs a little more work, blocking and finishing). I made large potholders in black and white, with the chinese symbol for "luck". looks to me like a human standing in front of a house? which might be considered very lucky - esp. if it is your own house:) 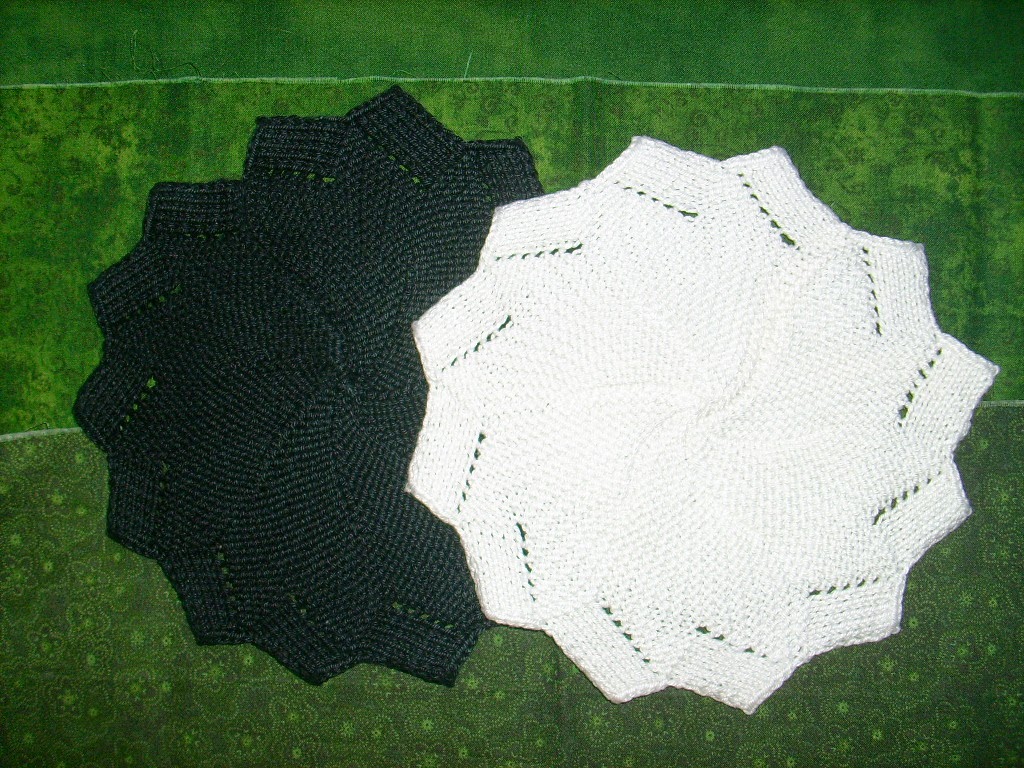 there were some leftovers, so I used the yarn up by making matching dishcloths. my favourite "no-think" pattern is the circular saw... 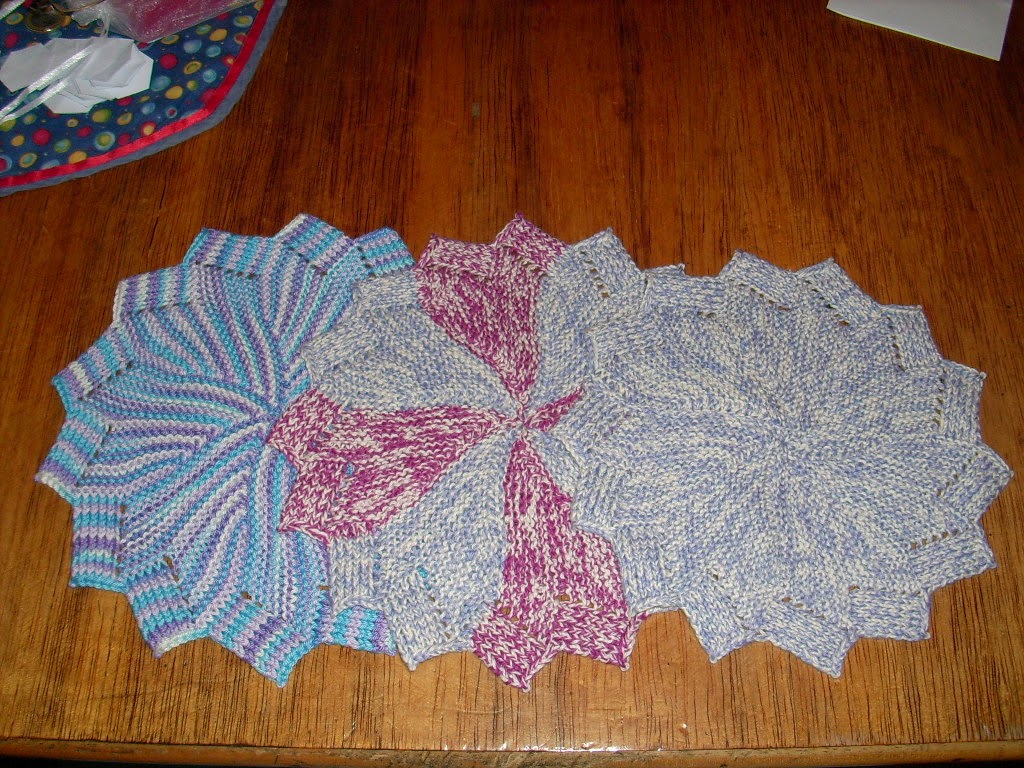 so I made another three for a small mother's day gift, together with a hand-made (not by me!) piece of soap. and was rather surprised, when my mother claimed that she was delighted to receive three pretty doilies:) well, it's not up to me how people use their gifts, but I don't think I'd like to use those as doilies (but maybe that's because I am not really a "doily person"). I find them quite nice to use as dishcloths myself, though I changed the original pattern a bit by wrapping the short-row stitches and knitting the wrap and the stitch together to avoid holes in the fabric. there are still the lace holes along each stocking stitch part on the outside (the zig-zag of the "saw blade"). but at least there are none in the middle, which wouldn't be very practical when in use... perfect for leftovers of multicolour cotton I think!