just to let you know that my email account with hotmail has been blocked (apparently hacked:() - I can't access my emails and addresses anymore. could you please send me a quick email here, so that I can update as many email addresses as possible? thanks...

gerriguinness at eircom dot net
(replace words with @ and .)

gerriguinness at eircom dot net
(replace words with @ and .)
Posted by Woolly Bits at 15:52 5 comments:

no, in this case it doesn't rhyme (old advertisement by very famous ketchup company:) - from now on beans mean colour for me! ok, there are plenty of different ones around, but I am talking about black turtle beans specifically. I read here that you can dye with them. and not just any old yellow or beige - no, you get blues and purples! I followed the description, soaked 1.5 kg of dried black turtle beans over 2 nights - and this is the result: well, if you image the blue to be more purple - or the light colour darker and more purple... that would be the result. unfortunately my camera doesn't like purple as much as I do - or maybe it does and keeps the nice colours for itself. anyway, I've never had purple show up as nicely as it looks in its natural state.... but I do like the result a lot (you can see, that wool and silk take up the dye slightly differently) - which means that we'll eat far more bean stews etc from now on:) I don't usually use foodstuff as dyes, unless I can use the material later. which is the case here, you just boil the soaked beans as you would normally and can use them for whatever dish you like - or freeze the beans for later. 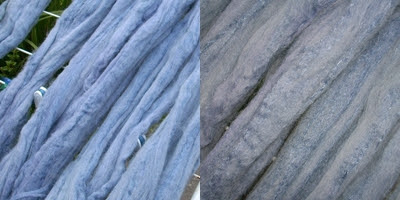 this wool/silk blend is the leftover of my picture socks; I just spun up the leftover of blue, but there's still a lot of green and now purple. no ideas yet what to use it for, but it would be soft enough against the skin....
I didn't dye much this year other than the sock yarn, which is mostly due to the fact that I still have so much dyed fibre in stash that I need to use it up before doing more. but I can still plant and grow a few more dye plants - some if which can be found on this table: 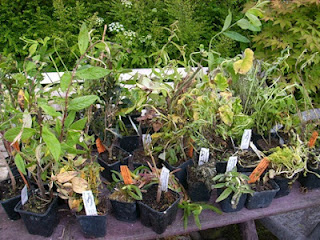 a friend of mine in germany helped me with this order, because there aren't that many herb supplier in ireland. unfortunately some of them didn't like being in a dark box for some time, but most of them recovered quite quickly. of course one of the dead plants had to be the myrtle (myrtus communis), which I have search for years over here. well, can't be helped, at least all the dye plants survived:) 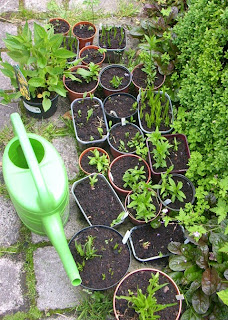 I also received a batch of several summer "bulbs", which I planted into pots in the baby plant nursery (close to the porch, where I can keep an eye on  them). all of them sprouted nicely, apart from one, which was damaged by slugs. it did try to sprout again, so this time I put it up on the window sill to avoid a second butchery.... all I need now is more space in the beds to put them all into permanent positions:) but we're working on this - our old herb spiral will be dismantled soon (it doesn't work so well, when you have couch grass and ground elder invading the stones sooner than you can turn your back:(), which leaves a lot of new free space to be planted into:) this was supposed to become a small pond, but after much to and fro we decided not to dig there. one reason are all the large mature trees with tons of leaves each autumn; the other would be that there are two very large boulders underneath, which we would have to dig out/split before putting in the pond liner... we have decided on another space for this - but it won't be ready for use for at least a year, more likely two....

apart from a lot of gardening work I've been working on my fairy-tale yarns - and I am happy to announce that I finished the last skein late last night - with only 1 m of yarn to ply with I finished the bear yarn. 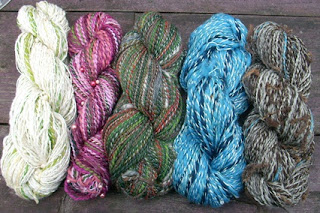 those are all five, not that the colours go all that well together:) 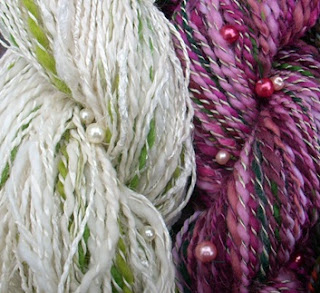 obviously those two are snow-white and rose-red. because they are girls, who live close to a forest and with a large garden, I added greens to their main colour - and a few beads as well. with hindsight I should have chosen smaller beads, because the larger ones tend to "hang" a bit off their plying thread.... unfortunately the holes in the beads were too small to pull loose fibres through to attach them tighter into the spun yarn. both yarns are made from merino, silk and banana silk. 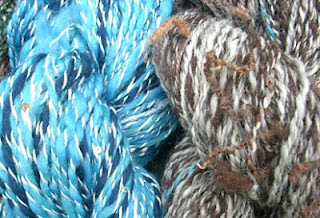 those two are the bear and the prince. the bear is a mix of icelandic wool, jacobs, locks of BFL - and a bit of blue to show that the bear is really a prince, put under a spell.... I plied it with a fine thread of jacobs humbug, which maybe added a bit too much of grey for a bear, but I like it anyway. the prince is spun from merino in blues and a ply of handspun silvery-white viscose. I added clear silver-lined beads and a few golden discs and small toothed wheels (from a watch maker) as "treasure" (princes should have treasures, right?:) 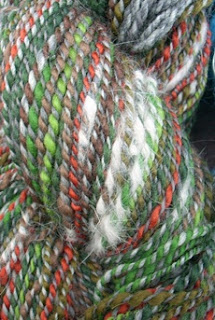 the last one in the tale would be the dwarf, a nasty old bugger, who gets his just reward for being so mean:) I used all kinds of corriedale and merino in forest colours - and a bit of rusty read to liven it up. when I plied it I added tufts of silver fox hair, which is too short to spin on its own - but makes a nice "beard" for the dwarf. now the question is: what do I eventually make from those yarns? I have no idea yet - but maybe I'll split them up eventually. for now I keep them as "fondling yarns":) 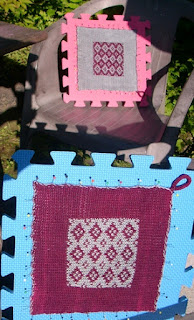 of course I didn't just spin during the last month! I also finished a few smaller projects, such as those potholders, in double knitting. my mother seemed to like the first pair I made so much, that she even requested another pair! because I only needed half a ball of cotton of each for the 1st pair, I had just enough to make a 2nd one, same colours, but different pattern - which goes well with a light grey kitchen. 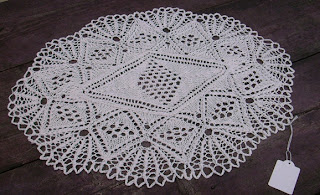 I also knit up this doily, from handspun ramie, which gives it a slightly nobbly, coarser look than bought crochet thread, but it's supposed to be used on a wooden table that is a bit more rugged itself, so I hope it fits (and no, I didn't attach a price tag to my gift, the paper thingie on the right just holds the information about material and washing:) 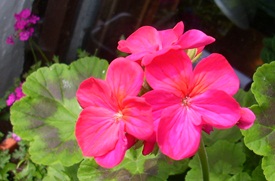 the last photo - I couldn't resist showing this one - is a close-up of a new geranium plant I grew. I just love that strong colour and wish I'd be able to dye a yarn in this shade! it seems to glow from the inside - the only nag is that the verbena to the left has a slightly different pink - which doesn't go at all with the geranium:) they looked similar on the picture, but hell, they don't fight and I am just glad about every bit of colour I can get in this dreary summer...
this is it for now, no entries for a month means I had a lot to catch up:) now I have to decide for a new larger knitting project - have been procrastinating for quite some time now, because somehow I cannot decide what to make. I better get cracking, because christmas isn't that far away anymore and if I don't hurry up a bit, time for making gifts is on again!