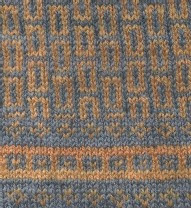 I had forgotten how quick baby knits can be.... well, could be, if you used bought yarn! when I heard about the new baby I wanted to do something with the texere fine merino that was still in the stash. I had bought some Gaywool colours from Derryaun Crafts a while ago and used green-blue-purple for one half and yellow-orange-red for the other. the idea was to sprinkle the fibres with the dyes to get a multicolour effect. didn't quite work out as planned though - the colours mixed too much when spun and the results were well blended into an orange and a slightly tired lighter blue. well, I finished spinning anyway and thought that I might go for the sprinkling effect with the finished yarn. but when I knitted a small sample I liked the slightly dampening effect of the blue to the brighter orange - and it it turn livened up the sadder blue... so, baby Christoph, your new sweater is going to be finished soon and I hope you like it! I slightly reworked a pattern from an older issue of spinoff, just have to finish the sleeves and that will be another tick on my to-do-list!

and then there is the new very mad project! DH needs some sort of net to put his radio antenna into a tree in the garden..... right, thinking cap on - and the result is a rather silly looking crochet net - made from orange builder's line! not the ideal "yarn", tough and springy with a mind of its own... and very good to use when you try to get rid of callouses on your hands.... but, look on the bright side, it's done pretty quickly - and might make for an interesting art object in the garden in time..... speaking of which.....
Posted by Woolly Bits at 06:01 3 comments:

yep - I did it! I promised myself for months not to start blogging .... but finally I just had to fall for the mainstream.... still, for the time being it will be mainly texts. we are still dinosaurs -without a digicam - and I will have to resort to scans or wait for the film in the normal camera to be ready for development. but I can finally show that I am not totally behind the times and give my blog address proudly (or not, but that remains to be seen!:). if I start spending hours and hours with this blog - I am going to blame all you people with those infectious blogs I have been looking at for weeks now!
Posted by Woolly Bits at 08:56 1 comment: