Irish Spring - and other mayhem

I've been meaning to blog for ages - but somehow the last month has been kind of hectic and chaotic. Not only inside - but outside, too! I remember an ad on tv years back, still in Germany. I think it was for a shampoo, called "Irish Spring". a gurgling small current, everything green and sunny, lovely flowers... if only! look at the header - that's irish spring weather today. and yes, I know, elsewhere spring starts in march - but over here it's supposed to start in february! honestly!
we didn't have much of a winter so far, practically no snow, very little frost - and you can see it in the garden. the snowdrops are in full bloom, the first crocusses are peeking out and the daffodils show fat buds already. what we did have in abundance though was wind. and rain. lots of it - so much in fact, that the coasts in the west and south are all flooded and there has been huge damage all along the coastline, due to storms together with very high tides. luckily we are quite far away from the coast and the small river at the bottom of the bog might be higher than usual, but no danger for us up here. and we had no storm damage in the garden, but the electricity went off several times. not for very long, 90 min. max., but funnily enough always in the dark! but it seems to me that the weather is doing weird things all over Europe (and not only there!) - so maybe we should count ourselves lucky that we haven't had 6 feet of snow or arctic temperatures?

on the textile line I've been busy, too. the christmas gift production is always followed by urgent birthday gift works here. I think birthdays should be forbidden after christmas at least until end of march:) no luck here, I've become a great aunt - in january! and of course there are others to work for already. so far I've managed all of them in time. apart from one, but that wasn't a gift, so it didn't matter. I did foolishly join the Christmas KAL on ravelry again this year. I started only in the 2nd week, so there wasn't a realistic hope for me to finish in time, but never mind. I did finish - by mid january:) 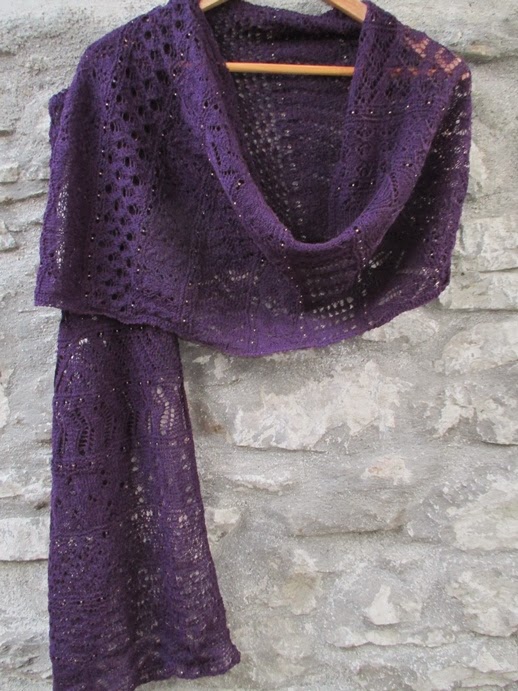 I bought quite a few balls of Austermann Lace two years ago (special offer). they are pure merino and very fine. aubergine, I couldn't resist:) there is nothing wrong with the yarn, but when I worked several very open lace patterns, some with double yo's, I realized that the yarn isn't perfect for that. some of the patterns do look lovely in the yarn, but others are simply too open and loose. and after blocking the shawl it became obvious that some of the patterns will pull together more than others - permanently. well, it's wearable, soft and light, too - but I wouldn't give it away like this. teaches me a lesson about using the right yarn for the right project:) 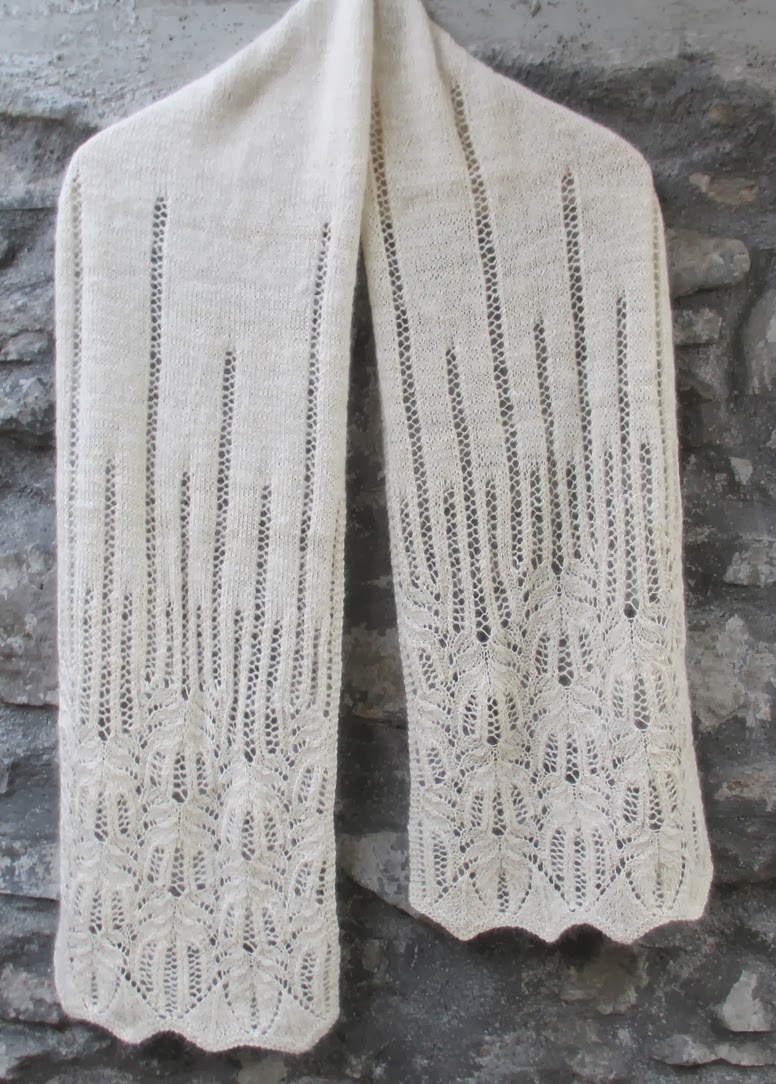 this one however turned out very nicely, I think. it's handspun yarn, a blend of 50 % angora with 50 % silk, both undyed. in some places the silk is more visible than in other, but it looks and feels very nice. I was worried that the angora will shed a lot, but after spinning it with a little too much twist and plying it quite tightly it turned out very well. it bloomed a bit after washing, even more after knitting, but it doesn't shed - or at least not much. the recipient isn't going to spit out angora all the time, when wearing the shawl. the pattern is available free on ravelry here. frost flowers is a very nice name for the pattern; in germany it is called "bear paws" instead, not quite as pretty? I choose to knit only 3/4 of the chart in width, because I wanted a scarf, not a shawl. 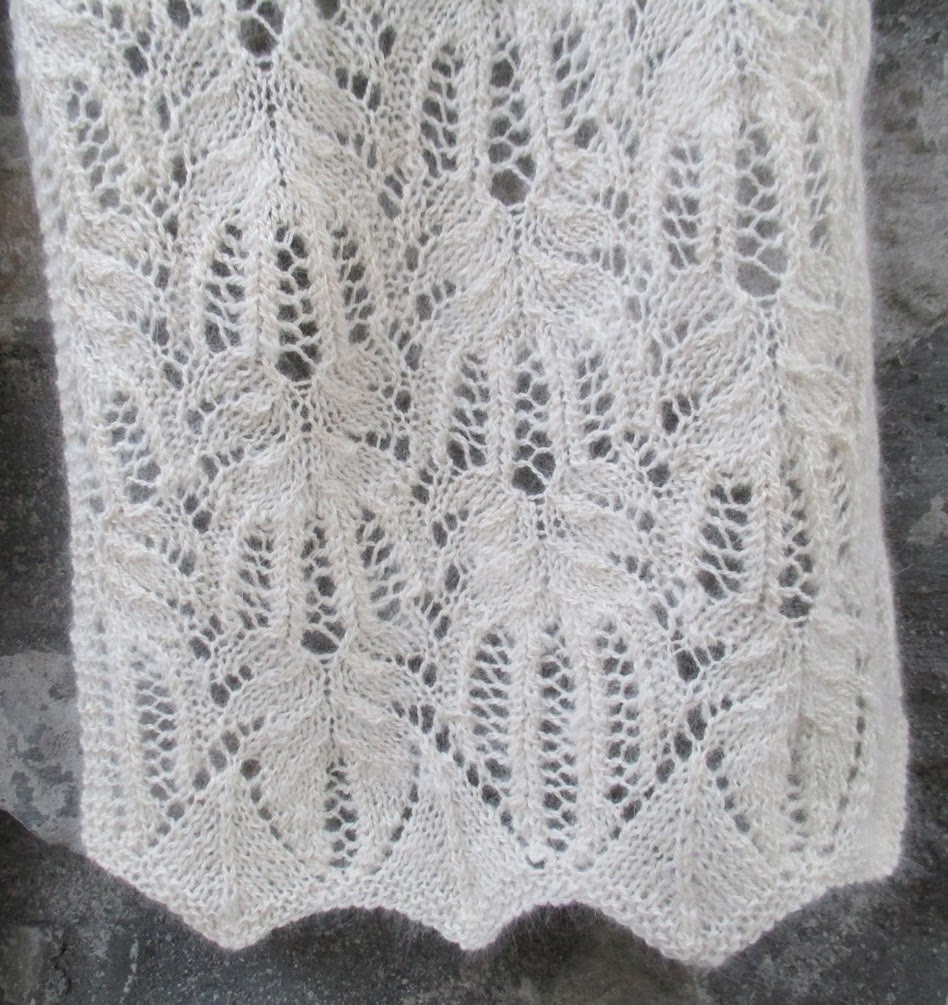 the pattern looks quite complicated, but it really isn't! no odd stitch combinations, no bent needles after trying to p5tbl etc... after one repeat I practically had it in my head, no need to look at the chart or count all the time, because the stitches have a very logical built-up.
the whole scarf only weighs 150 g, and because I bought 300 g of it - I could do a second one. I did finish spinning all of the fibres (I am famous for doing only as much as I need to just now - and end up with bags half full of fibre leftovers) for once - so I can think up another snuggly project. not for me though - I'd probably die of heatstroke in this scarf! 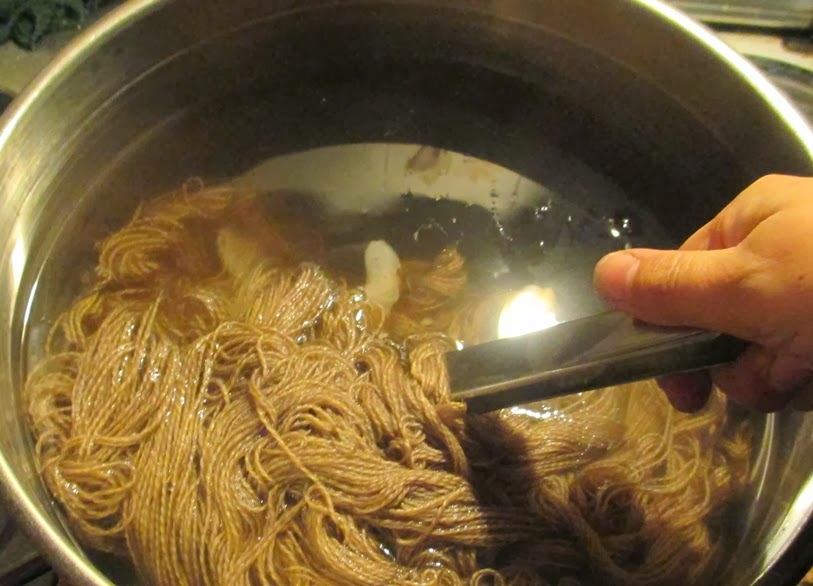 I also dyed a few things. I finished spinning the baby alpaca - and dyed it with gaywool dyes; the colour is called mushroom. this I will knit up into a short cardie - a real longterm project:) I gave away a voucher for a "hanson" shawl, but the recipient prefers a short cardie instead. then it took a while to think up a colour and of course, I had to spin the yarn. and dye it. but now it's ready to go, the gauge is done and I will use a "horseshoe" pattern for the cardie. the yarn is very soft and fine and feels really nice - so I hope the cardigan turns out well. 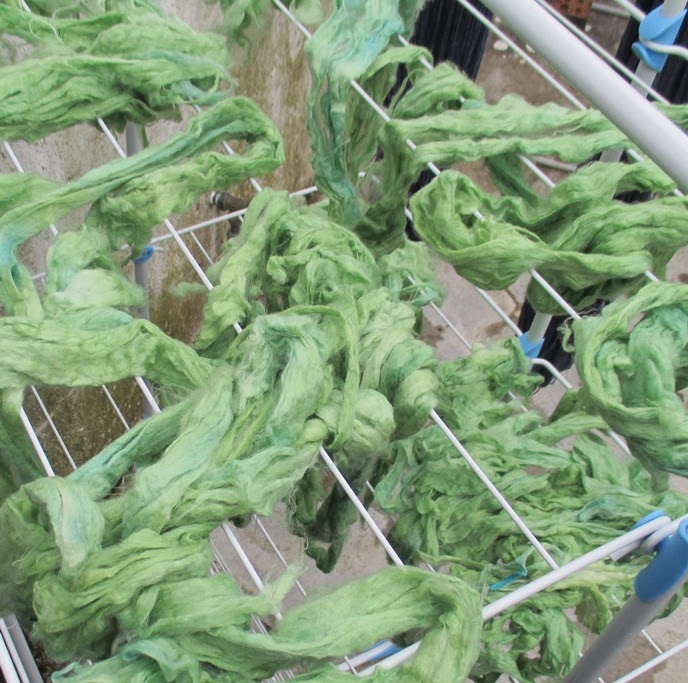 the new baby in the family has to be dressed as well - the plan is to make a cardie like this. I thought about using angora or baby alpaca, but I think it's too hairy for a small baby. instead I dyed some superwash merino in a slightly variegated green. I dotted some blue on first and put everything into gaywool "ivy" after. when spun up it should be only very slighly mottled. the plan is to make it for 12-18 months of age, so that gives me a bit of time for the actual job! I have to say though that the superwash top was no fun to dye - it falls apart when wet, and leaves a right mess on the drying rack! 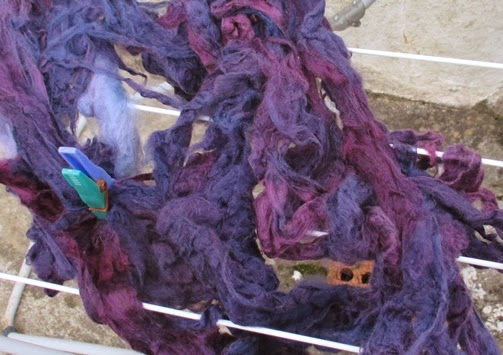 all in all I dyed about 400 g in green - which left me with about 150 g of undyed superwash top. I first did an acid dye bath in blue with a bit of red (leftovers from last summer) to dye a grey wool/silk blend. the intention was a purplish tone, but it came out pretty much all blue! two odd skeins that I didn't like the colour of came out pretty much all red in the next dye bath. and the superwash? turned out to be the colour I wanted for the grey skeins! very odd, not sure why this happened, but I suppose it had to do with the age of the dye.... the adventures of diy dyeing:) and I couldn't take pix of the overdyed grey yet - because the skeins took ages to dry...and the weather has been yucky ever since!

knitting is on the menu as well. I started something mousy again - a potholder in double knitting. the pattern is on ravelry - but it turned out as a flat rectangle, not the square I needed! this is only half of the potholder, but already more than 3/4 of the pattern! I had to add a lot of raindrops on top to make it square - but I think it looks alright. no. 1 is done, no. 2 on the needles. 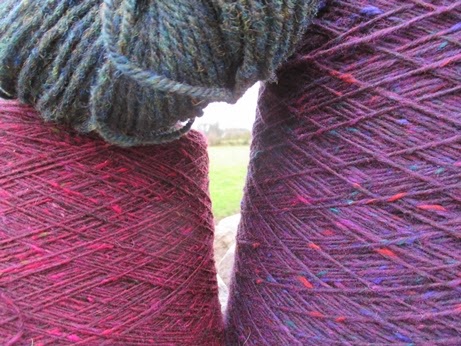 when we went to the mill in Donegal I wanted to buy some aran yarn, too. somehow it got delayed and delayed (not that I urgently need more yarn:) until january, but now I finally have the yarns here that I wanted. this pic shows more detail, but the colours are way to light! 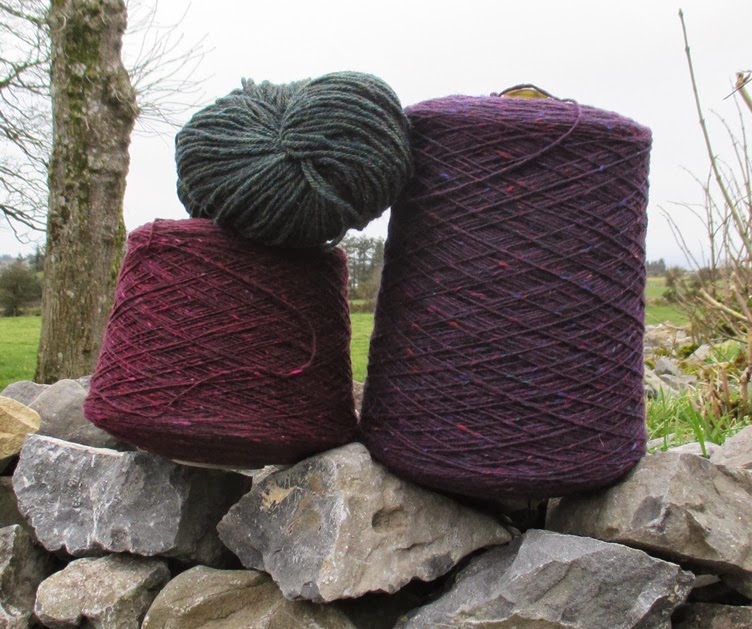 this is closer to the original. the colours are dark and saturated. the right cone is 2 kg of donegal tweed aran, for needles size 4 to 4.5. I plan to make a simple long cardie, maybe with a basketweave pattern, for me.
the cone on the right is a newer addition to the range, called soft donegal. it's available in fine single ply (like here) or in 2ply, on 2 kg kones. I didn't really have a plan for the 2 kg I ordered, but when I checked it closer I thought it might be suitable to knit a long coat in double knitting? I'd have to buy a 2nd colour of course, but that shouldn't be a problem. and I have to make a sample, because the single yarn might come out biased when knitted up! I don't want to invest time and money into a rhomboid coat!
the dark green skein on top is "donegal heather", chunkier than the rest and a 3ply for DH's new sweater...
of course there are a few small "side projects" coming up here and there. just now I have to sew in the threads on a set of gloves with cropped fingers - will be used as a valentine gift! and yesterday I plied 100 g of polwarth, which I ordered as a sample. I wanted to finish it before starting the sweet pea green - so I plied it with fine commercial silk. no idea if I leave it as a lace yarn for a small project - or put it into a dye pot during the next session.
off to make a mug of tea - just the thing on a cold evening in front of the spinning wheel! I just hope that the snow will be gone by tomorrow....