this is the result of quite a few hours of work over the last few weeks... what can this be? 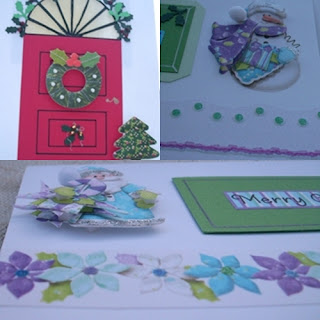 christmas cards - and lots of them:)) all in all I made 51 - not all are different or it would have taken me even longer to make them. I made some single cards like the decorated door - but also some batches of 4 or 6 that have a similar design, if not exactly the same. the plan is to make up several small packs to give away - I always need  small gifts around this time of the year and I figured that nearly everyone can use a few christmas cards. 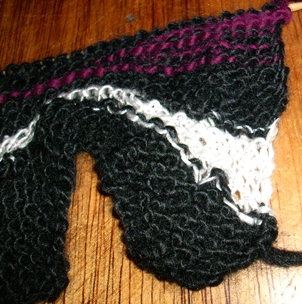 I didn't only cut and glue - of course I knitted something, too. a school sweater is shaping up, only 1 1/2 sleeves are missing. and I tried to knit a pattern from interweave with my "lucious Lucius" yarn. the latter wasn't the best idea - the yarn is soft and feels nice, but I don't like the way the colours spread in this particular design. the short rows on both sides make the colours look rather weird - and I have to say that I don't like the way the short rows form an inverted V at the bottom. I will try the pattern again with a different yarn - but I'll also start differently. I think I'll try fewer stitches as cast-on, increase slowly each row, so that a bowl-shape forms at the bottom. not before christmas though, no time to fiddle about just now:)) 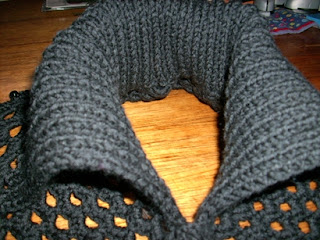 I did try another pattern, more successfully, I think. the original is from an Interweave Crochet pattern, the rib is knitted, the lower part is done in crochet. I made the first one in handspun, rather more colourful, but it's to be a present, so I can't show it right now. I couldn't stop myself, when I finished the first one - and made another one in black merino straight away. it's soft and feels very nice - and I think I'll keep it for myself. it's actually called "Lucious collar" - maybe I should have used the other yarn for this one?:)) 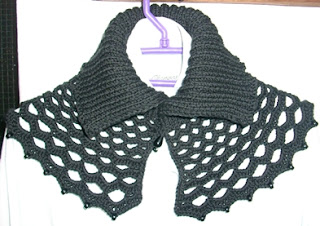 this has a rather stark contrast due to the flash, but it makes the beads I added to the bottom row more visible. I thought about adding beads to the first collar too, but decided against it, because the yarn was already multi-colour and I don't like to overdo it with a pattern, esp. if it's used as a present, where I don't know the taste of the recipient so well!
I am also nearly finished with the table mat, just a few more rows and maybe a napkin ring as a small accent. the next christmas present is already lined up - the yarn and needles are ready to start tomorrow:)) I also found a lovely christmas decoration I want to make, smaller though, because the christmas red and green felt I have in my stash is too thin to support a larger one. there's a Secret Santa coming up and I need another small idea for this - soon.... so, no rest for the wicked as they say (why for the wicked???)
Posted by Woolly Bits at 15:25

Great job on the finshed cards! What a lovely touch for a greeting card! I love the way your collar turned out-very pretty. As for the black and white knit=interesting but if you have to rip out , so be it! I am so grateful that yarn is re-usable! lol

I can't believe how productive you are! You put me to shame. So impressed with the Christmas cards. The collar is a very clever pattern too so the link is appreciated. It's just the time of year for something like that.