I think I might have prepared the TdF a bit better! Maybe I should have prepared small amounts of different fibres that I can finish every day - or at least every second? as it is I have been spinning several days of boring beige alpaca - then only a day each with small amounts, which was fun. now I am back again with spinning days of the same colour - not so much fun! but on the other hand, if I spun only a small amount of one fibre - I'd end up with my usual problem of not spinning the same way for both amounts. the beige alpaca proves the point: my first smaller skein from March is a good deal finer than the main batch from last week:( which means that either I have to use them for two different projects - or I'll have to fiddle about, using the finer yarn for a smaller bit of knitting, and the thicker yarn for the main part. and 250 g of it doesn't leave a lot of choice for projects, where I could use two different amounts:( the woes of hand spinning!

here are the two beige alpaca skeins - on the right. the rest are the naturally dyed fibres that I couldn't find for the last entry.I think all of them were dyed with madder, same dyebath, just different stages - and different temperatures! my favourite is the brighter red on the right - which must have been in the first dye bath, because it didn't get the higher temps of the others. madder turns brick red to brownish, when it gets too hot - and even though they all go well together, the brownish red tones don't suit me terribly well. on the other hand I barely knit woollies for myself, so no worries:) maybe I should start selling my skeins?

after I finished the alpaca I dug out this sample of camel/silk blend. I think the silk is noil, lots of tiny white slubs - that are not particularly fun to spin. the picture isn't great, but I nearly forgot to take it - and had to use flash inside - or wait until the next day with the spinning... and I did forget to take a picture of the sample of white tussah - which spun up nicely - but was too little to use for a separate project. so I plied both of them together. I had a bit more of the camel - that's the browner part in the skein. it is soft, but nubbly and bumpy at the same time. 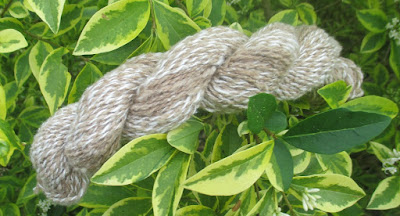 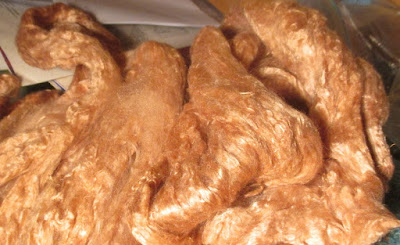 This is my latest TdF fibre - either silk or soy silk, I don't know. I think maybe the latter, but either way it spins up into a smooth, shiny single yarn. I will ply it though, as it is it's too fine even for lace knits. I know that I dyed it myself - but I have no idea what the dye stuff was. maybe I should keep better notes???

you can see how fine it is - even with the full amount the bobbin won't be full to capacity! the plying will take forever - I have to be careful not to start it late in the evening - or I'll end up with a late night plying session to prevent the cat "knitting" it up! he isn't interested in the wheel or the fibres lying around, but finding a small ball or the freely hanging plies is irresistible to him. the dogs don't really care, but sometimes they just have to climb to my left side - where the lazy kate stands when in use - which wouldn't be the first time with disastrous consequences.... 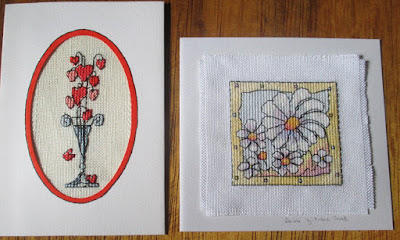 during our hot spell (over now, back to the normal summer temps of 16 to 18 deg. C:) I dug out my embroidery stuff. after finishing an UFO I made 4 small cards to give away (yes, four, I sent one out too fast and forgot to take a picture). these two were for friends, who needed a bit of a pick-me-up... 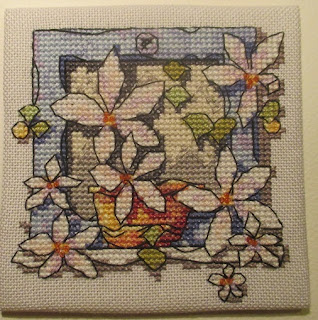 ... and this (and the missing one) were for birthdays. the other embroidery project in the works is a game board for "snakes and ladders" - which "rested" in my stash for a long time.
I don't know why, but somehow I cannot bring myself to knit much these days. there's a sneaker sock in cotton in the works, but if I can convince myself to take it up, I loose interest after a row or two:( I also have to finish the sleeveless vest for DH - not much missing, but I avoid it like the plague just now. I don't even fancy starting a new project - there must be something wrong with me! maybe I just have to finish with the TdF to find my knitting mojo again?
Posted by Woolly Bits at 07:17

Beautiful fiber pursuits!!! The natural dyeing always produces such muted coordinating skeins! The cards are always a fun pick-me-up for the maker and the receiver! The cross stitch is very pretty-enjoy plugging away on it!
As for getting a knitter's block, just go with it and enjoy the other creative outlets! (Nice thing about knitting-it doesn't have an expiration date!)

Cindy - thanks - and yes, I agree, most natural colours go well together. it's just that some of them don't suit me so well:) with some though, like the silk, I'd be willing to wear it despite the not so suitable colour - because the silk feels so lovely on the skin. or maybe I should overdye it??? not sure yet...