even though the sun is out quite  a lot, there is that autumnal feeling in the air, esp. early in the morning and in the evenings. it's cool (if not downright cold at night! funny, how 8 or 9 deg. C feel mild in spring, after the cold winter, but freezing in autumn, when we're used to summer temps), often windy and I could swear that the leaves of my jap. maple are turning colour already! on the other hand knitting or spinning are so much nicer, when the fibres or yarn don't stick to sweaty fingers:)
I am not complaining, I don't mind the cooler weather, esp. not, when I have to ride the bike into town or work in the garden. the only thing I could do without is cleaning my oven in the evenings, but I am not lighting a fire yet - a month or so still to come without ash and dust everywhere:) 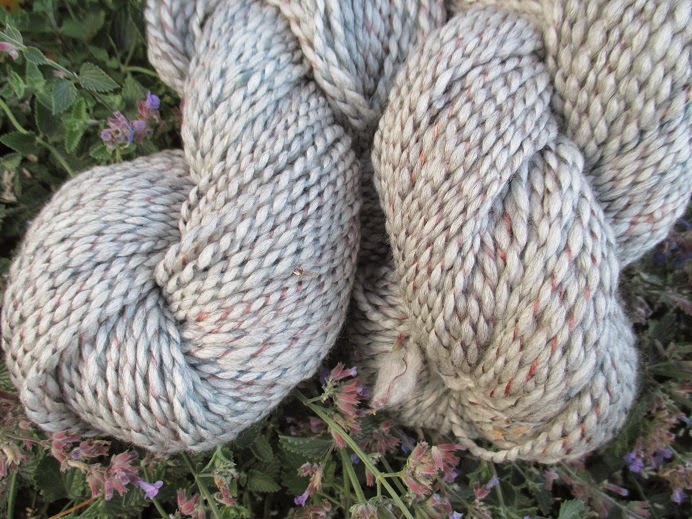 I wanted to test knit a beret, so I needed some yarn. why is it that there's never the right yarn in my stash for a project, even though all my boxes are overflowing?:) I remembered that I still had pre-draft in grey wool/silk and when I dug through some of the boxes, out came a ball of handdyed, handspun soy silk. a fine single yarn that I used to ply the grey with. the colour changes are very muted, barely visible in the hat. 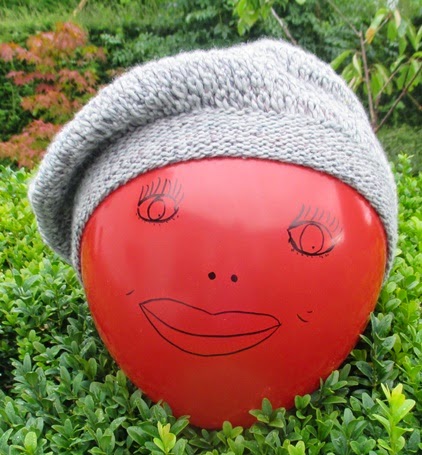 of course none of the guys was willing to model the beret - so I had to "blow" a balloon into service:) unfortunately the very round face doesn't do the design justice - and my drawing skills aren't much to write home about either. but you'll get the drift.... 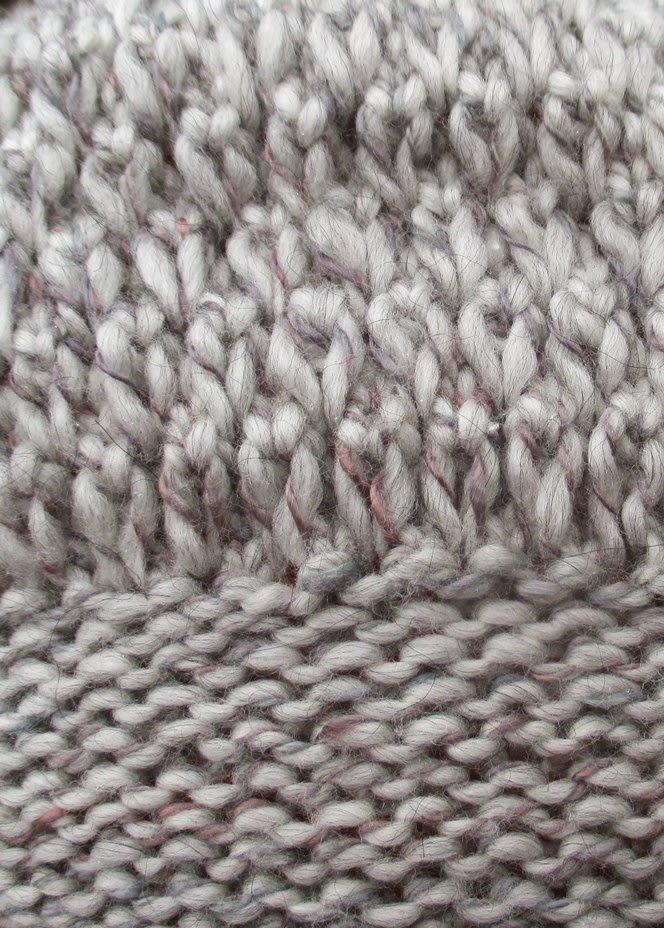 the hat is worked in the round, but in hindsight I'd choose a smaller needle for the crown, because the pattern is a bit loose like that. and admittedly the yarn is rather soft for this style, so the beret is quite slouchy. with my non-existent hat face I looked like a baker's boy:) 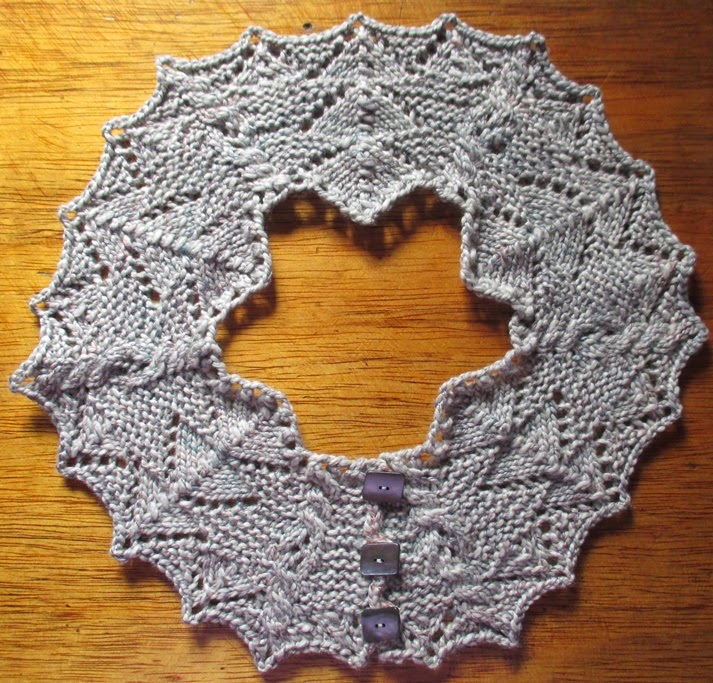 but the yarn is very nice to wear, so I used it to make a collar out of it, it's called over the moon collar. I think I am going to make one for myself as well - but I'll add at least one pattern repeat and maybe use a slightly thicker needle than for this. in the picture on ravelry the collar is much wider and longer and I'd prefer it to not meet in the middle, but buttoned over like the turquoise one from the pattern... 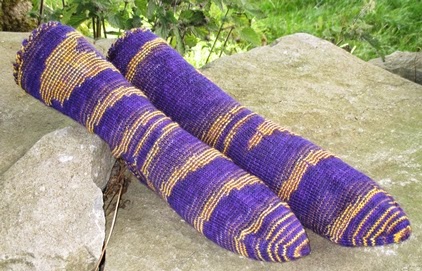 this is another lonely sock that was finally partnered:) I dyed the yellow with dyer's chamomile some time back and added the purple by hanging the undyed part into a pot with acid dye. where it met the yellow it turned into a browner purple - and knitted up it looks like a shadow behind a star. the first sock (on the left) had a lovely big yellow "star" on the front leg - but unfortunately I didn't manage to get the same done for no. 2:( which has a yellow blob on the back of the leg part - not at all star-shaped:) it's a straightforward sock, but I purled all stitches that were yellow on the needle (not on the foot of course, where I only purled on top). 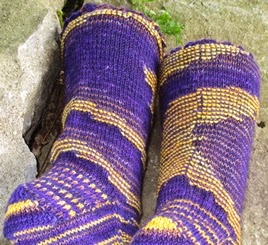 well, that happens, but they fit and they're hidden under jeans most of the time anyway, so I didn't change the toes of the second one.... (oddly enough the 2nd one is slightly larger than the first. I think I must have changed the needles from one sock to the next, because the number of rows is the same)
lonely sock no. 3 is in the process of getting a partner:) no more sad singles in the basket - soon! 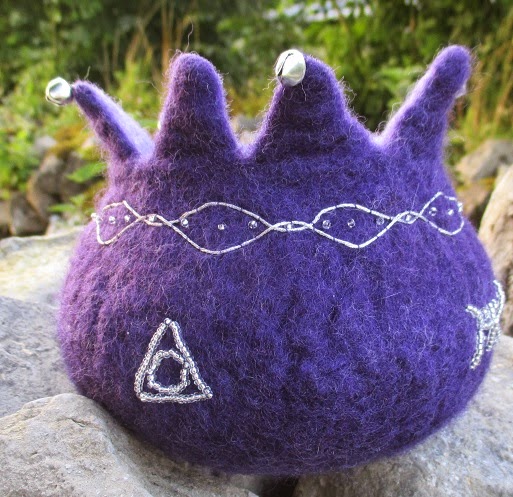 embroidering my felted star bowl was next on the list. I put on some silver lined beads as well as 4 little silver bells - looks very wizardlike now:)  the kettle for making the magic brew.... 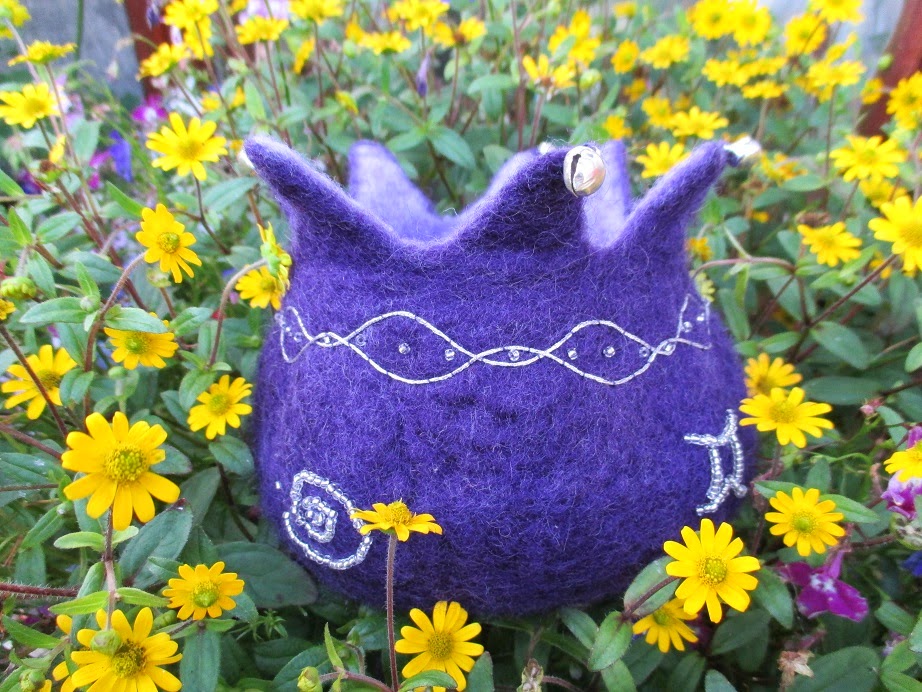 it seems I have a thing for combining purple with yellow... 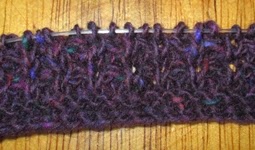 and I finally started hunting for a coat pattern for myself! yesterday it was all my old "verena" and interweave knits mags, today I browsed through the heap of vogue knitting issues. believe it or not, despite all of those, I didn't find a single pattern that I really liked:( same on ravelry! either they're too bulky, have a weird shape, are too short or too long or in a pattern that would be quite complicated to adjust. in the end I started to knit a gauge square in this pattern. it's a brioche type, but not the normal one - there are simple knit rows on every 4th row. I'll try it in 4 mm and maybe also in 3.75 - thinking that with the length of a coat the knitting might distort if knitted up on bigger needles. the idea is to knit a simple straight shape in this pattern. probably with inset sleeves to make it less bulky - and to add a wide rib to the front, plus collar.... a snuggle-upper coat:)
Posted by Woolly Bits at 11:08

What a fun post! I love your beret model! Very clever of you. The beret is a winner. The socks are too cool. Great job with getting the projects done-that cauldron is too cool! (We are in a heat wave-hard to remember chilly right now!)

I love the beret. Those socks are wild and awesome. I think the purl stitches for the yellow is a great idea. When I do fancy socks, I know that they are hidden under my jeans or long skirts, but it makes me happy. That's what really matters anyway.

What great projects!! I like that beret, it just looks like it would be fun to wear. I can hardly wait for the cold weather to get here ;-)

Looking at all those lovely projects reminds me of how much I'm looking forward to cooler weather!

Hi Bettina - good to look at y6u your blog again. I have returned to the blogging world - am still knitting. How are you since August? Janet