over here we are still saying "happy christmas" though, despite political correctness etc. when you go outside today the country seems to be asleep. apart from the occasional car far away and the rain on the roof there are hardly any sounds outside. in germany we celebrate mainly on christmas eve, but over here everybody celebrates on christmas day! it's a family day, no visiting neighbours or trips to the pub!
luckily the weather was alright today - last week we had one day of snow in the morning, which came as a surprise - just a day after I said that I had to upload a snow photo from last year:) it looked ominously grey and threatening, but it calmed down in the afternoon and we went back to rain and wind over night! we seem to be stuck in that pattern - there's another hefty storm in the forecast for tomorrow night - and more heavy rain, too:( is this our punishment for a fairly dry autumn now?

I am not sure that all the presents made it to their intended recipients in time, but I think I can safely show these pix, as most of my family members either don't own a computer or they don't look at blogs... 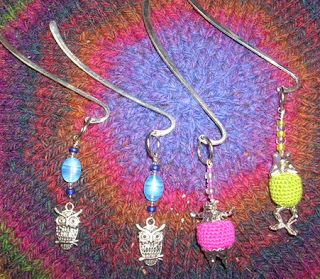 a little while back I ordered some charms and added a few bookmarks to my order - those oddly shaped hooks. I also found some funny little pewter bits at our september group meeting - a hippo in two parts and a frog. the middle can be a large bead, a felt ball - or little crochet tummies in green and pink. my mother collects hippos and she likes to read - I hope she likes the pot-bellied pink hippo girl:) the frog is for my MIL. the owl bookmarks were a bit easier to work - the beads are easy to put on wire, whereas I nearly broke my fingers, when I crocheted and filled the hollow crochet beads. but of course owls are a bit more sedate than frogs:) not sure about hippos....

the background behind the bookmarks is this: 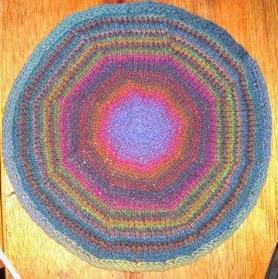 I spun some of the donegal tweed pencil roving and chainplied it to knit three round covers for kitchen stools for my parents. I chose three slightly different "patterns", just different ways of increasing really. the back is made from two layers of dark green fleece, which is nice and soft - and easily washable. as an edge I knitted attached i-cords all around. they are between 33 and 35 cm in diameter... ...and all have different colours. this is still drying after blocking. 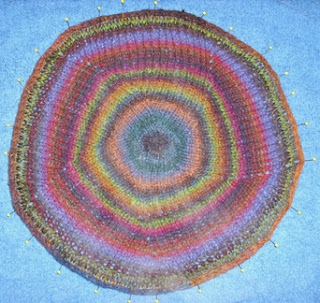 the first two gave no problems, but with the third one I ran into trouble. this only has 5 points of regular increases, but can be blocked to a circle. the problem was that the middle bobbled upwards! I had to block it really hard, which shows in more open knitting at the outer edges. eventually I managed to steam the middle down - and the rest out, but the other two turned out nicer. lesson learned: more increase points apparently make smoother circles?! 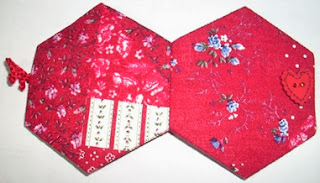 a few days ago I received a small needle book as a present - and I liked the idea so much that I "stole" it:) mine is a bit bigger though and I added two layers of felt for needles. the hexagons measure 4 cm on each side - so that I can put quite a few needles inside, but it's not as big as my normal one, which is old, rectangular and quite ugly by now:) this one is going to be a present though - but I plan to make one for myself - eventually. 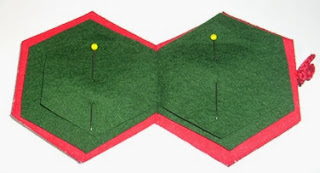 it's big enough even for my largest pins, which I use all the time. I cut the inner felt a bit smaller than the outer one, so that it's easier to see, which needles are where. 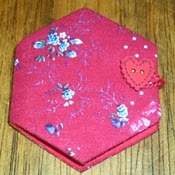 it's closed with a button and a small loop, which I crocheted out of stranded cotton. a small gift and easy to make - perfect for leftover patchwork fabrics and the odd single button? 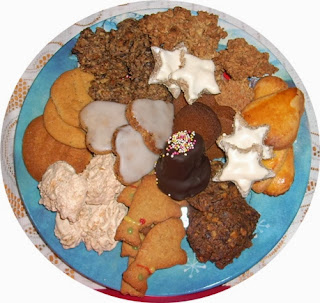 the last 3 days before christmas I did nothing much but baking. a lot of baking:) and I still have one lump of dough in the fridge, but I ran out of time yesterday afternoon or the presents would have been unwrapped after midnight! and I just couldn't bring myself to bake them today - but I guess I have to do the vanilla crescents tomorrow! we finished the plate quite quickly, but in my experience the rate of munching slows down with every day that passes after christmas eve.... still plenty in the tins though! the one covered in chocolate is the odd one out. I saw the "top hats" somewhere on pinterest. they are just bought oreo cookies, a marshmallow glued on top (with melted choc) and covered in dark chocolate and a few sprinkles. I have to admit that they do taste nice - but I only made 14 - that's all there was in the roll of oreos:) 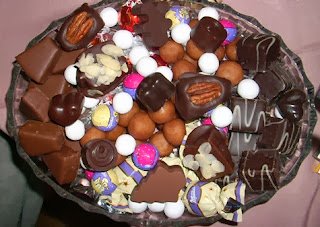 I also started to "make" chocolates - which is a bit of a misnomer. I don't make my own chocolate from scratch, I just melt it, blend several together (dark, medium, milk, white etc.) and add whatever I think might work, I made coconut (with desicated coconut and coconut oil), peppermint, mixed spice - and some "ice praline" (the ice is a bit misleading. it's not kept in the fridge, but the melting point of coconut oil is lower than that of the chocolate - which leads to a cool feeling in the mouth.) - with mocca flavour. I also made pecan-marcipan and marzipan-nougat pralines - the rest is bought - but that plate is also nearly finished:)

I hope everybody had/still has a nice christmas - to be honest I am rather glad that the rush is over for another year. I am going to finish a few projects now that I started quite some time ago, but didn't finish because I had to work on christmassy stuff . the first in line is the christmas kal shawl - where I am doodling about on day 12 - instead of wearing it proudly already:)  and tomorrow I'll do some spinning - which I haven't done in weeks - withdrawal symptoms have set in days ago:) see you soon!

That pencil roving turned out beautifully! Nice to see some under the radar projects! G l ad you h ad a merry Christmas!

I love needle books. I've made a couple for gifts but really, I should also make one for myself. Yours is very pretty. Yummmm.. cookies and chocolates. Your plates of goodies look scrumptious.

What wonderful goodies; something to please everyone! I'm very impressed with your cookie and chocolate baking.

I've gotten the distinct feeling over here that folks are tired of the political correctness being shoved down their throats. I've heard more "Merry Christmas!" than "Happy Holiday" this year than ever before. :)

Cindy - I actually used very little of the pencil roving, even though it was chain-plied. still a lot on the heap - but it has to keep for another idea:)

Nina - I like a lot of those small sewing "whimsies", have made quite a lot over the years, but I still use the old and by now dirty (ink stain!) and tatty one I made, when I was a teenager:) the only good thing about it is that it's quite big:)

Leigh - I think I am going to reduce the foodie stuff from next year onwards - far too many cookies and chocs for just the 3 of us!
and I don't really understand the problem with PC, where christmas greetings are concerned. it's not as if you try to shut someone else out with it? when jews, muslims, buddhists etc. celebrate their special days, nobody is asked to change their greetings to suit whatever special day might coincide with christians? it's like constantly adding "her" or "she", where it used to be "him" and "he" in texts - it might be correct, but it makes reading the text a total pain in the you-know-where....

The meaning of this is that you actually get rid of fat by eating coconut fat (including coconut milk, coconut cream and coconut oil).

These 3 researches from large medical magazines are sure to turn the traditional nutrition world around!