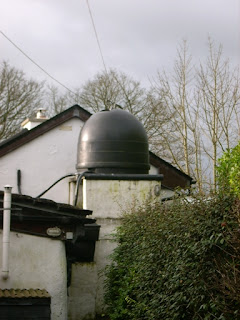 Leigh from "5 acres and a dream" asked me if I could post photos of our water supplies. so here it goes:
if you come from a civilized country in the western world, chances are that you just open the tap in the house and out comes clear water. of course - this comes with a price tag, too! I don't know how it is in other countries, but I know that in Germany you pay more for waste water now than for the water itself. which makes perfect sense, because cleaning waste water is a huge effort and has to be paid for. in our temperate climate a lot of people seem to think that water is ubiquitous; there's enough rainfall, so why the high prices? but clean water is not a matter of course; it's not just "there" to be used up! and when we came over we realised quickly that we've been spoiled in Germany. over here in the countryside water supplies are private schemes. and let's just say that their running isn't always as efficient as it should be. the result is that some of the time the water in our area is not fit for human consumption. that is why we didn't get connected to that scheme! luckily rain is usually in plentiful supply in the west of ireland. so we installed tanks. small tanks, large tanks - all to be used to collect water for the house. we have two wells within walking distance, where we can fetch drinking water in canisters, but the rest of our water consumption is covered by rainwater.
the picture above shows the most important part of it (apart from the rain that is:). to use water inside the house you need at least some pressure. this is provided by height - as you can see, we have one large tank installed  higher up than the main house (and there is a very large concrete tank underneath!). this gives the water enough pressure to flow inside the pipes easily - though you can see inside, when the level is lower, the pressure sinks! of course this tank doesn't hold nearly enough water for our needs. there are more: 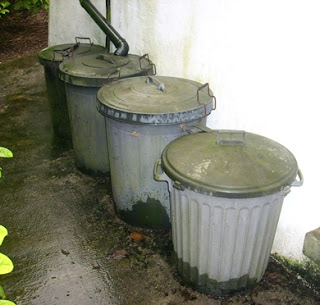 those drums are at the back of the house. they are connected, so that the overflow is caught by the next drum - until they are overflowing. which has been happening a lot lately, because of the extremely wet summer and autumn. that isn't a problem however, because there is a small "cherry laurel forest" behind the house, which can take up all the overflow without getting too muddy. 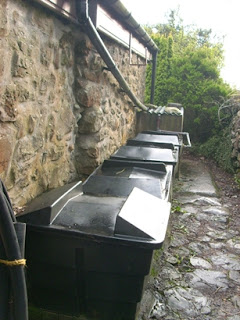 there are more tanks alongside the shed. same here, tanks are connected to make the best use. just in the corner to the bottom left you can see a black pipe. this pipe is used to pump water from the tanks into the main tank higher up. the same set-up is on the other side to empty those thanks. the pump is installed inside the shed and runs on electricty. unfortunately, but no other set-up has been viable so far. and it needs to be inside, because the pump can freeze during winter, which we had to discover last year in the very cold spell:( the shed isn't heated and after 6 weeks of near permanent frost the water inside the pump turned to ice and the pump exploded - and had to be replaced.

this is another tank - which holds about 1000 l and is fed by the porch roof to the side of the house. the white wall to the right belongs to the tank in the next photo. 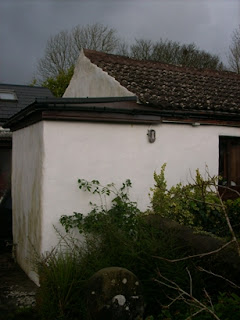 we also have two large concrete tanks. one is below the black "egg" in the first picture. and the second one is in this photo. from the outside it looks like part of the house - but the lower part in front is actually all tank. with a tap at the bottom - and a roof on top, which also feeds the black "egg", which is behind the white part. 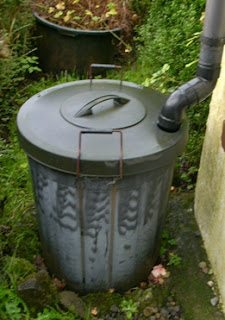 of course there are drums close to every roof, never mind how small. this one is at the front porch (with gravel underneath to catch any overflow), but there are others for the greenhouse etc. all in all we have well over 15.000 l of water, if all tanks are full. since we started this system, we have never been out of water, even in drier years. of course, even this water isn't really "free". we don't pay money (apart from having well and rain water tested for pollution each year, the electricity for the pump and water filters, which need replacement every now and then) - but I can tell you that it takes quite a lot of work to manage it all. you have to keep the gutters clean, and of course the tanks need regular cleaning as well. you have to monitor the water level in the upper tank or you might run out of water just when you're all soapy in the shower:) but all in all we are lucky to have such good water - no need for softener or calgon etc. in our household! and of course, being a natural dyer - I value my very soft water as well:))
unfortunately there are still no proper water charges here, related to consumption of the user, at least in our area. you can still see leaking water troughs in the fields and nobody looking after them. farmers still spread slurry willynilly close to wells etc. it takes a long time to seep into some people's minds that having good water is their right - without doing anything for it!
Posted by Woolly Bits at 07:15

Bettina, thank you! It's a wonderful system and I'm am incredibly impressed with it. I'm guessing you've added on to it as needed? Very well done.

Wow, that is a lot of work, but the satisfaction of having your own water supplies must be worth it. I agree with Leigh, very impressive system.

thanks, everybody - I'll send the praise to DH, who did nearly all of the work and the job of pumping etc.:))

Leigh - yes, of course, we've added bits and pieces over time. though - when you have the main system im place, adding tanks is not a problem. we'd love to have an underground cistern, but unfortunately that isn't possible -lack of space and totally unsuitable ground (rule no. 1 here: if you want to dig a hole, you're bound to hit a huge rock after 20 cm:))

Nina - definitely! one of our triumphs was, when after the first frosty winter in years the whole village was out of water, because all the pipes were cracked. everyone - but us, of course:)) makes all the work worthwhile. and the water quality is better as well! the downside was that we had to carry water in by the bucket for some time, because the pump eventually broke. can't win them all!

Thanks for sharing this! That's an impressive water system.

Wow Bettina, thanks for this great post, even though I just came across it now. It's really good to read about the effort one has to go through to get great water.
I moved house and now have the luxury, beside being the 'normal' way connected to a mains water supply, to have access to a spring. Unfortunately, due to high rain and long time no usage, it needs cleaning. Weather permitting, I'll definitely will do it!
Thanks for this great article.

Bettina, I just found your blog (via Leigh on 5 acres) and am so happy I did. We too are homesteading and Ireland is where my heart is even though my body is in Illinois. The west is my fav. Been there 11 times. So now I get to read about yet another homesteader in another place I love. What a great day this is!

Come visit my blog somday. I'll be back to yours often