... I had planned to write posts many times, but there was always something more urgent to do... but of course I haven't stopped crafting; I think you'd have to cut my arms off to keep me away from fibres and yarns! I did take photos most of the time, but if I listed all of them now, this entry wouldn't be finished any time soon...
so I decided I might show pix here and there from things I made during the last two or so years, but only if the projects were "special" - no point in showing you the umpteenth pair of ordinary socks etc.
for now I only changed the header - as you can see summer is in full swing here! actually, we haven't had a summer like this since I first came over! we had no rain whatsoever for practically a whole month (luckily we had a massive "downpour" - for an hour - on the 8th of june, which filled all of our tanks!) - and we had several days with well over 30 deg. C - extremely unusual for us! there is a hosepipe ban in many areas now and tourists are gobsmacked, when they come with raingear and wellies - and need shorts and sunscreen:)
I am not a fan of high temperatures - I am happy enough with 20 deg. C,  or even less when I have to cycle! so I try to work outside before 10 am and after 8 pm - otherwise I might just melt:( but I have to admit that everything that I do water grows well just now. it must be a warm summer here - as I discovered this evening, a rare artemisia plant, which only ever flowers in very warm climates has set its first flower bud! I've had that plant for at least 15 years, if not more - it's never flowered before, so I am looking forward to the result:) pity that my Dictamnus died a few years back - or I might have been able to see for myself that during great heat the ess. oils of the flowering plants can ignite!
anyway, enough of the catching up - the main thing that convinced me to start blogging again was the TdF - the Tour de Fleece! I have never taken part - but I thought I might give it a try, seeing as I can't work outside during the day anyway. not that I wouldn't spin otherwise - it's far to warm to knit anything woolly - so I have been spinning practically daily - and here is proof:

the batch on the left is teeswater top - I had to use up this years' batch of easter egg colours and when I saw the fibres I couldn't resist spinning them up. I think eventually I'll make the "Persian Tiles" blanket with some of them - but for now they've gone from the fibre stash to the yarn stash....
the softer colours on the right are teeswater as well, but dyed with natural dyes a good while back. I have no idea, which colour goes with what plant though, but it doesn't really matter anyway. the white hank in the middle is ramie - and the beige skein on the right of it is a naturally beige alpaca I was given a few months ago. it was named top, but I am quite sure that it isn't. it's soft enough, but contains a lot of short fibres and looks more like a batt stripped lengthwise? when I started spinning it the weather was grey and cold - and after one bobbin full I couldn't face beige anymore - that's when I started with the vibrant easter egg funk:) 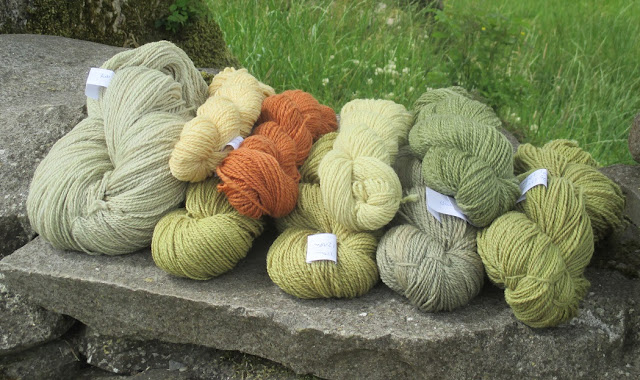 teeswater top is nice to spin - for a while. after all those hanks in the 1st picture, I needed something different though, so I started to dig around in my stash - and found a large bag full of naturally dyed tops. I had forgotten about those! we did a dyeing session in our craft group a few years back, but we had way to many fibres prepared, so we divided them between the members - and I think this lot was south american top. it's not as cottony soft as merino, has more grip - but the yarn is soft enough to be worn close to the skin. I have no idea (again, recurring theme.....) how I dyed, but looking at the picture I realize that I must have put quite a few madder dyed skeins elsewhere... and there was some yellow, too. never mind, but as you can see - I've been spinning regularly during the last few months:)
I decided not to buy anything new for the TdF - plenty of fibres in stash to use up! first of all, while I am still full of drive, I'll finish the beige alpaca. if I don't dawdle I should manage that in two or three days! I can always reward myself with something more colourful afterwards:) I'll spin more "default" yarn, 2ply, not too chunky, so that all the yarns could be used together eventually.
this was my spinning spot outside for today - it was bearable under the parasol, but I might have to move back inside again if it gets any warmer. because I spun the first skein of alpaca on the old Louet I'll keep using it, so that the yarn comes out the same (without thinking about it, I am sure I could fiddle around with the Lendrum to make it match, but I am too lazy to do that:) 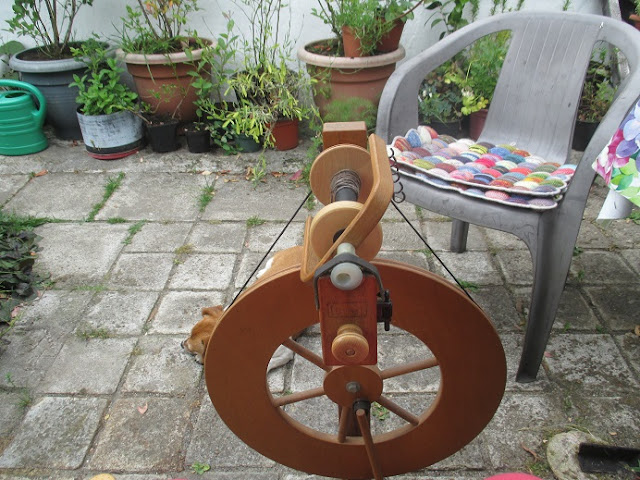 and this is a close-up of the alpaca - as you can see it's quite "flat" and more batt-like than like top? of course tea and cookies are needed for fortification purposes:) 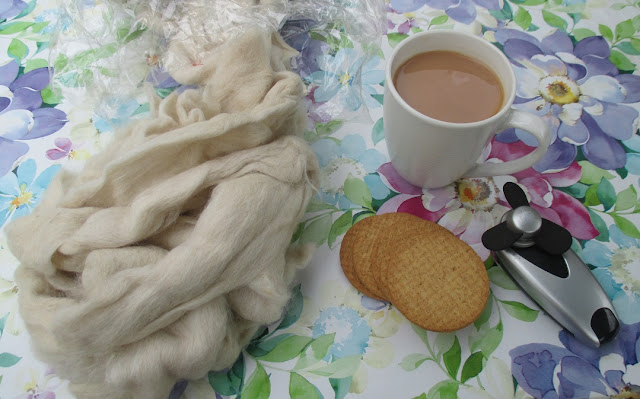 so I am going to try to post at least every few days - maybe once the fibres are finished and I start something new again. I haven't decided yet what to do on the "challenge" days - I wanted to try boucles again, but I think I don't have suitable fibres for that. maybe cotton or even hemp? not sure yet, but there's still time to dig something "challenging" up for the monday after next. I'd rather spin nettles - then cycle the mountain days the cyclists have to face:)
are you spinning the TdF as well?
Posted by Woolly Bits at 15:44

What a wonderful surprise to see your post!!!! Hooray for joining in on the TDF-welcome! I am plying the last of a boring natural color before I start in on something more interesting! I love the collection of the naturally dyed yarns-they go so well together! The easter egg dyed one would make a beautiful blanket like persian tiles!!!! Go for it! It is a fun pattern!
So glad you are enjoying warm temps-your header is a beautiful picture of your country side!

Cindy - I had meant to blog again much earlier - but somehow "life got in the way" as they say:) and the tdf has been on my list for years as well, but on the other hand I don't need reminders to spin - I do it all the time! but it's nice to see what other people are working on - and maybe it gets me out of my spinning default groove as well:)
for the persian tiles - I still have to decide which base colour I should take. white? black? some good contrast to the very colourful skeins in any case....