.... only a few more days to go and I have the feeling that I didn't spin all that much! the cyclists certainly had a worse deal:) but I did finish the apricot coloured silk - and the handle is lovely. I think it would make a nice cowl or even longer shawl. it only weighs 117 g, but has a yardage of about 750 m! that's not too bad for a single skein and I am sure that I'll find a nice pattern for it - something lacy I think! I'll admit though that the pink of the rose isn't exactly a great match😉 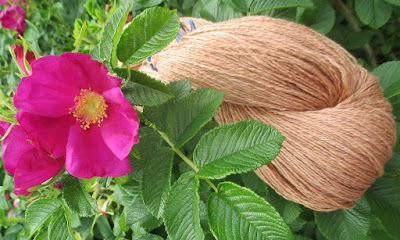 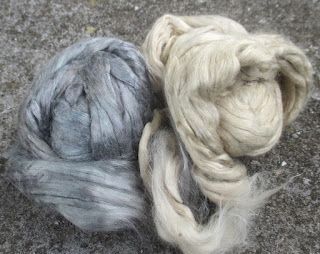 I also dug out two smaller balls of narrow top - I think this must be soy silk, because it is just a narrow band (and doesn't smell like silk when wet)... the silk above was from a brick, much wider and I had much more to spin. both of those together are less than 50 g - and they're already spun and plied! I plied both with a light grey wool/silk blend - but it's dripping wet and not terribly attractive just now! Originally I thought I'd make two separate yarns, 2plies. but it was so little that I know I'd only end up with two balls of yarn that are never used.... as it is I now have two full bobbins of yarn - enough for a proper project.
I am not sure what I'll spin next - first I have to do a small "in between" knitting project as a small gift that's needed on saturday - so today (and tomorrow?) are going to be my rest days during the TdF - after the change of the challenge days there isn't much left of the original structure - I am just spinning away without restrictions... but I think I'll grab one of the chunky skeins of teeswater from the shed again - maybe the minty green tone? more yarns for my Persian Tile blanket.
but before I go (more watering to do, what else?) I should really introduce you to the "new" member of our household - very belatedly! this is Maisie - who has been living here for more than 2 years now. after Dobby died we only had Minnie left (and the cat, of course), and the house felt so empty that we decided to look for another dog. Dobby wasn't able to walk much anymore and I wanted a dog that's fit enough to go on walks with me, so I contacted the local MSPCA if I could come and look. Maisie was about 1 year old, fully grown and scared of people! well, no, not scared, more like terrified. she most likely hadn't been socialised to humans at all, left in a barn or shed to herself, the poor dog.  it took me a good while to gain her trust, but eventually she realized that we don't mean her harm - and after a few weeks she was totally changed! she's still afraid of strangers, but around the house she's happy and carefree - and she loves walks, running around in the bog and playing with Minnie and the cat - happy ending?!  we don't have many visitors, if we do she can hide if she wants to - other than that she fits in so well that we think we picked the perfect dog - for us at least:) 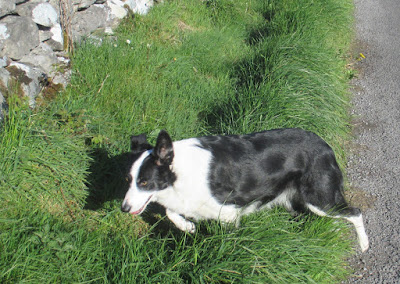 Oh, that silk skein is so precisely spun-great job! I just put some Hamshire on the wheel-a very easy spin after the finely spun Merino S/W!
Congrats on the lovely Maisy! She is a beauty of a dog and such good company for you!