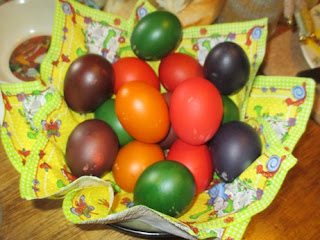 I can't believe that we've already reached the end of march - maybe that's because the weather doesn't exactly feel like spring. the daffodils are out in force, but it's pretty nippy out there, lots of rain - the day before yesterday we had a storm etc... we did have 10 dry days in a row, some with lovely sunshine, but it was too short - and of course the bad weather was back in time for easter. we have our own small tradition here that I dye fresh easter eggs early on sunday morning - and hide them in the garden before breakfast. and even though Stefan is 18 now - he still wanted me to do it:) the easter bunny might not mind, but I didn't fancy going out in one of those spring downpours, so today was the first easter without that tradition - after 16 or 17 years! I think the disappointment wasn't too bad - he was out late yesterday and too sleepy to care much about anything:) 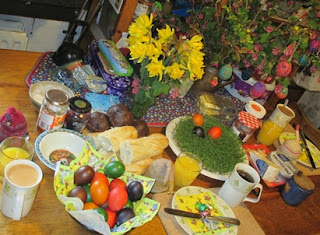 another tradition is to grow some cress - to have a nice "grass" background for the coloured eggs (of course, cress does go well with hard-boiled eggs). some daffodils and the usual flowering branches with painted eggs (blown out and decorated many years ago!) have to be on the breakfast table, too. and the knitfelted egg cozies that I only use once a year:) 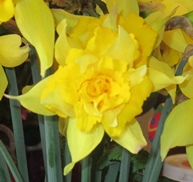 easter wouldn't be the same without daffodils! at this time of the year they grow everywhere here, some seem to pop up out of nowhere, no houses in sight, not even old ruins - so I think birds or ants must have spread the seeds for them to grow - as far as I know there are no wild growing "native" daffodils in our part of the world. these I picked as deco for today - but I leave most of them outside, esp. the dwarf varieties that don't suffer from wind damage so much. after the storm many of the longer stemmed ones are flattened to the ground - the one drawback with this flower, because once they're flattened they don't recover:( 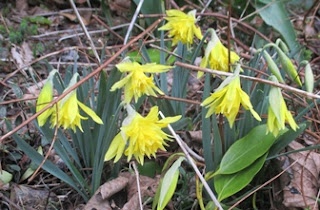 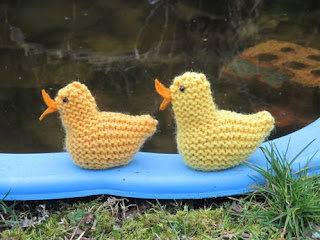 those little ducklings were the result of seeing a photo on pinterest... each of them decorates a cadbury's egg - and they have moved out of here and live in Berlin now. they are open at the bottom, so they can be refilled every year with a new sweet bounty! I had to hurry up when I took the photo, because the cat seemed to be veeeery interested with those newcomers in the garden! 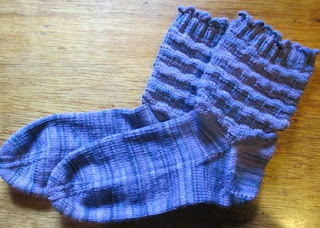 of course I didn't only knit little ducks - I also tried out the cotton sock yarn I was given a little while back. it looks the same as woollen yarns, but the yardage is slightly less and the knitting is a bit denser on 2.5 mm needles. it feels nice and wears well, but I think one would need 2 balls for socks larger than maybe size 43!
and I only discovered in the photo that a line runs along the sock where the needles changed - I think that isn't so visible with woollen sock yarn, because it is more elastic than the cotton? the colour in the upper picture is too blue, the one on the left is a better match. I like that the leg slouches nicely - but the feet are tight enough to stay put.
but now it's time for "dinner" - a rather non-festive thing, after we ate some nice rhubarb cake and quite a few easter eggs of the chocolatey kind:) have a nice and colourful easter!
Posted by Woolly Bits at 14:28

So many lovelies in this post! We had rare moments of sunshine but at least no rain. It was warm and humid enough for swimming.
I love the view of your table for Easter breakfast; just beautiful and full of love!
The Cadbury egg duckies are perfect-my daughter craves those sweets!
The socks are just right; they've come long way with cotton yarns, they are nice to work with and wear now! Good job!

Happy Easter Bettina to you and yours.

Cindy - I don't think we'd be able to use an open air pool more than maybe 3-4 days a year:) it's only around 10 deg. C and windy to boot, but on the other hand we only had a few showers, no heavy rain so far! at least we have the weather to use all the woollies I produce:)
I don't like the normal cadbury's eggs so much myself, I only like the ones with caramel filling, but they're rare and not on sale everywhere! but then the ducks could be worked in chunkier yarn - to use as egg warmer for real eggs?:)

Janet - thanks - I hope you had a few nice days over the weekend yourself!

What a colourful and fun Easter setting! I am jealous of your daffodils. Ours won't bloom for a while yet.

Nina - our daffodils are in full swing just now, but there are still some varieties that are only in bud. unfortunately the windy weather has knocked many of them over, the downside of the taller varieties! I don't normally pick many, because they never last that long in a vase, but I collected many of the fallen ones now = a huge bunch of all kinds are giving me a cheerful yellow "blobb" in the kitchen:)