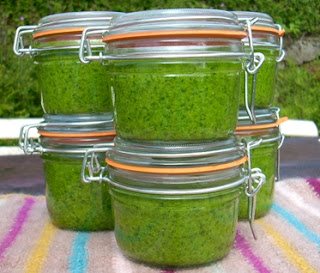 I don't weigh the leaves, I just wash them, shake them dry and stuff them into my blender. I think I had about 250 g or thereabouts this time. I added 100 g of ground almonds, a medium sized chunk of hard cheese (I used gruyere, but you can use parmesan, older cheddar or other mature hard cheeses) which I grated finely -  and enough olive oil to make a smooth paste. don't add too much or your pesto will be too runny, it's easier to add a bit more when needed. I put in some salt and pepper to taste, filled it into kilner jars and covered it with some olive oil to keep it fresh.
according to other recipes this should last a few months if kept in the fridge - but I wouldn't know because it never lasts very long in our fridge:)

you can vary this recipe: if you have unskinned almonds use them - as long as you don't mind the colour change; the almond skins make the strong green go rather brownish... you could also exchange them for pine kernels - but they are quite expensive over here and I thought they didn't affect the taste so much that it would have been worthwile. you can leave out the cheese if you don't have any or don't like cheese, but I find that it makes the taste less "green" and a bit fuller. 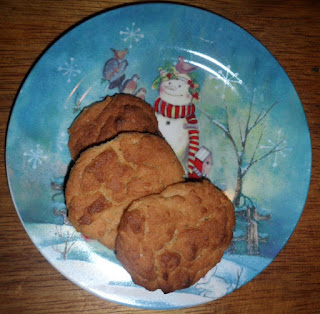 these cookies are my son's absolute favourites - I have to make them, when he is in school - otherwise most of them are gone by the time I finish the last sheet in the oven! I don't know where I found this recipe years back, but I remember that I doubled the ingredients after the first test - still not enough, because I usually have to make a second batch before christmas arrives...
225 g sugar, 200 g light brown sugar, 225 g butter, 225 g crunchy peanut butter, a pinch of salt, 2 eggs, 1 tsp vanilla extract, 220 g flour, 1 tsp baking soda
cream sugars, salt, butter and peanut butter up, add eggs and vanilla and beat it all until fluffy. mix the baking soda into the flour, add both to the creamed mix and blend in, but don't beat it for too long.
form into balls of 2 cm diameter, put onto baking sheet (covered with baking paper). they spread, so don't put too many on the sheet! you can press them down with a floured fork, but I don't usually bother, because they spread flat anyway. to be honest, the dough is a bit sticky, so I don't even make balls anymore, I just use two teaspoons to put little heaps onto the baking paper.
bake them (at 200 C) for 6-7 min. until they are nice and golden - but don't worry if they get a bit darker, because several people in this house actually prefer them quite dark:)
I think it was very likely an american or british recipe, because in germany butter comes in 250 g packs, while over here they still sell them with 227 g! I am sure it wouldn't do any harm if all the ingredients were adapted to a full pack of butter. and if you don't have vanilla extract handy, just leave it out - nobody noticed the difference when I did last time! ﻿ 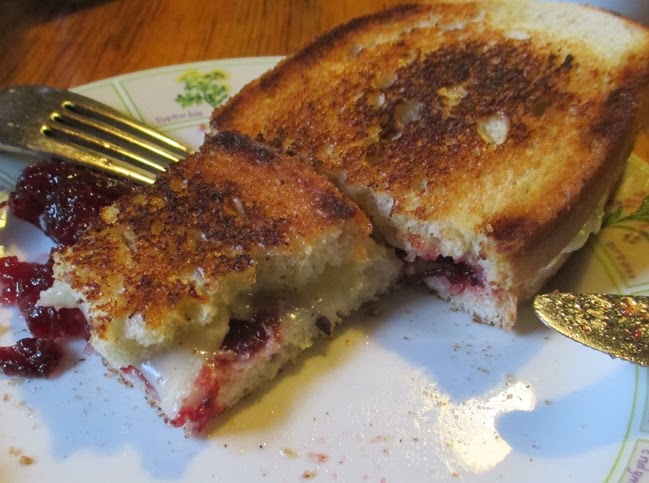 ﻿
Simple and quick, but tasty:

take 2 slices of bread (I like sourdough, but any bread will work). butter on one side, cover with brie slices, add some cranberry sauce and cover with another buttered slice. melt some butter in a pan, fry on both sides until brown and the brie is melting. Enjoy!

I love that you've made a recipe page! Did I miss that my last visit? No matter, great idea. As much as we love garlic, this one's a must try.