today it looks like autumn - rain or at least drizzle and grey, grey, grey.... but it doesn't feel like autumn, when I go outside! it's still very mild, nearly muggy out there. my strawberries think it must be spring - they started flowering again! same for some of the roses - they're producing flowers as well, while the rugosas are still full of hips. very odd, but I do like the sight of all the yellow and red on the leaves just now (we had a few sunny days and cold nights, which always makes the change of colours brighter!).
and I have a few more reds and greens to show: 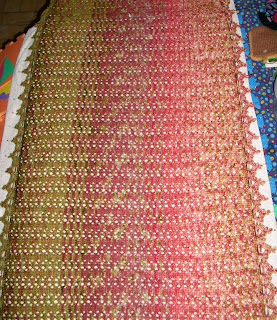 this is the Argenteuil pattern that I changed a bit by using more stitches (my yarn was finer) and by adding a crochet border. the colours were different as well, of course, no green in the original, so mine isn't a sunset - more of a rose garden?:) but it's a blend of wool and silk, too. the green and the red tones in the middle were dyed with acid dyes on light grey yarn, the reds on the left were dyed on white. I plied this one with one thread of very fine silk, but you'd have to look very closely to see a difference in the knitting. I had to block it in two halves though - too long for my 10 foam jigsaw pieces. high time to get myself another one or two of those sets, but apparently they are out of fashion just now? I didn't see any on offer for quite some time, but I'll wait patiently until they're on sale again somewhere. 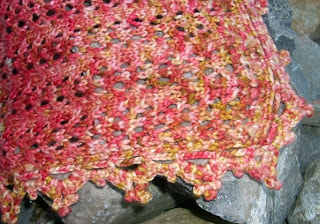 even though the edges didn't roll very much, I thought the shawl looked unfinished without edging. I thought about knitting a lace edge, but none of the narrow patterns appealed to me - and I wasn't sure I'd have enough for a wider one! so I started digging around the crochet books and found an edge pattern I liked in this one. easy to do, not too frilly - and I still had some leftovers....
. 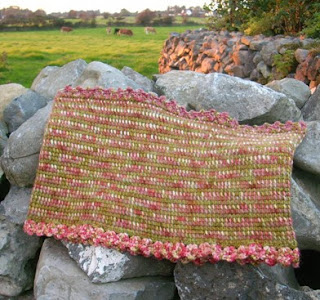 ....which I used to make a cowl. in tunisian crochet, worked in the round - a technique we learned from the latest demo at our group meetings. it's simple really - but as with all things it helps if you check the fit before you finish the project:) I worked the cowl - and tried it on when I had just finished it. trying is the right word - because it didn't fit, too narrow to go over my head! so after a bout of ripping I started again - and this time remembered to try out the chain st base before going on! I nearly finished the green, but had some of the two red yarns left, so I added a bit of "normal" crochet along the edges. 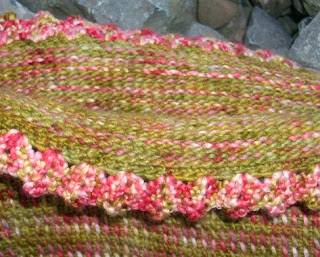 in the detail you can see that the wrong side looks a bit like purled knitting. it's quite dense, but soft enough to wear around the neck.
not sure I'll keep it though - I don't wear stuff like that often, so both of them might end up in  the "gift" box... 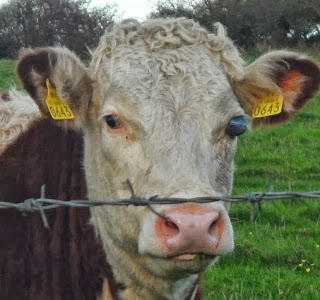 we had a bit of a problem here on saturday - which lead to me having to go halfway into town again to pick up a bike. on the way I passed this cow - which looked totally normal from further away. but when I came closer I saw her eye! I don't know what's wrong, but it looks like a big glass orb, terrible! I tried to find out something online, but so far without success. it looks painful to me, but the cow was very calm, and well fed, she didn't look sick at all otherwise. I wonder if maybe she was born with it?
I am using the rain today to get the ironing done - at least I hope I do, because the mountains are growing... out with the music, otherwise I'll bore myself to death:)

the weather is still unusual for october - very mild, often sunny or at least dry and not too much wind! I don't trust this - somehow I have the feeling that very nasty weather is just around the corner:) anyway, I finished most of my berry picking, endless blackberries (taking advantage of a very good year!), seemingly endless rosehips (though that's down to the job of scraping out the seeds before using them) - just the elderberries left, but I expect that I can pick the first batch this weekend. 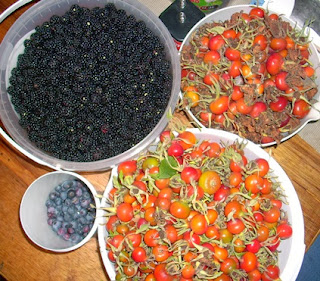 I managed to pick about 12 kg of blackberries, and after days of scraping and sieving of rosehips I ended up with 2.6 kg of rosehip puree (without sugar, most of it will end up as jam). I keep picking blueberries, but they only ripen bit by bit, so I have to freeze them and wait until I have enough - unless I take what I have and put them into a fruit salad. soon fresh fruit will be harder to find - unless you're willing to buy stuff imported from the other end of the world! I also tried rosehip syrup for the first time - but I think I let it simmer for too long. I filled it into a tall, narrow bottle - where it set so nicely, that it barely moves at all. I think I have to re-heat and dilute it, otherwise I'd have to scrape it out of the bottle to use it! 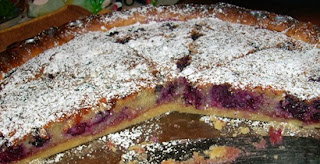 Mostly I make juice from the blackberries, which I can use for fruit soups, hot drinks and jelly, of course. and I make some fruit puree (without seeds), which can be mixed with gelatine and whipped cream for dessert, or for ice cream etc. but I also froze some smaller bags full for cakes - like this pastry filled with almond/egg/sugar/blackberry mix - delicious! 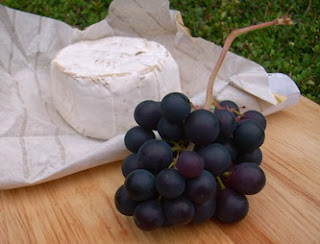 I just wish that our grapes would be as plentiful as the blackberries - this is the one and only we managed to pick. but I have to say: they looked perfect (this colour in yarn - I want some!!) and they tasted just as nice. maybe we'll have some more next year?
even though there are still a lot of gardening jobs waiting to be done, I managed to finish a few bits and pieces on needles and wheel: 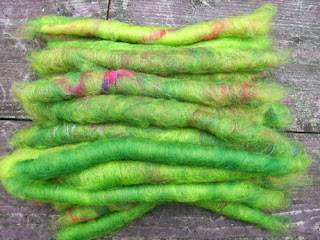 I blended some merino and corriedale in greens and yellow with bits of sari silk, made rolags and spun it into a coiled yarn. the plan is to make another bracelet, but first I have to crochet around the metal base, before I start weaving the coil yarn around it. 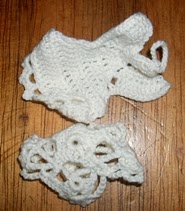 I also started a few small christmas decorations - not, because I felt very christmassy, but because some members of our group are doing mini workshops shortly before christmas in the museum, where we have our CTC meetings. before I decide for a suitable small deco project, I have to try out different patterns! they don't look very promising all curled up (and worked from sock yarn, they are too chunky anyway!)... 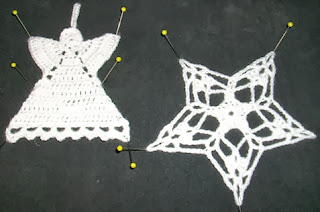 ... but once they are blocked, I think both of them look ok. I'll spray them with starch - but I will try out a few more before I decide on one or two. we only have 2 hours, which doesn't exactly leave an awful lot of time, esp. when I don't know how good visitors will be at crocheting! which means that the patterns have to be quite basic, nothing fancy or complicated! 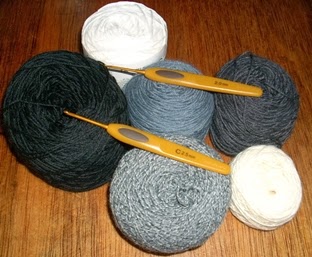 these "before and afters" have been finished for a while, but I couldn't show them before.. not very promising, some sock yarn in very boring colours... 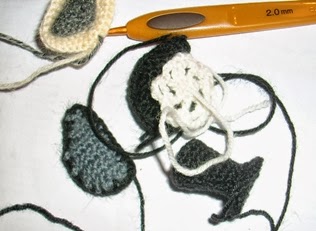 .. after a lot of tiny bits in crochet, some sewing, some stuffing, some beading.... 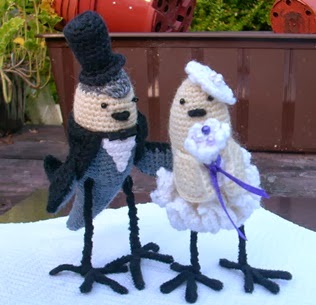 ... let me introduce you to bride and groom, Mr and Mrs Birdie:) they were just a small gift to unwrap for a wedding in the family. I don't particularly like money gifts, but being far away and not knowing what might suit this was the most sensible way, I think. though in hindsight I find a bride in natural white with gleaming white hat and skirt a bit odd - that's why I added a bit of purple. the original had white beads and white ribbon, which made for an even paler looking bride.... 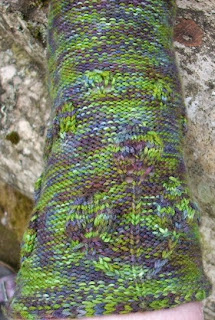 I also finished the base of my first "moody jungle" sock, knitted with the silk sock yarn I had dyed during the demo session at one of our group meetings. I will make a few colourful flowers, probably in crochet, to attach them to the sock base. and one bell-shaped flower will be attached to the i-cord, which I used instead of a rib. a leaf already dangles off the other end of the cord, which can be knotted - but the sock is tight enough to stay up on the leg anyway. 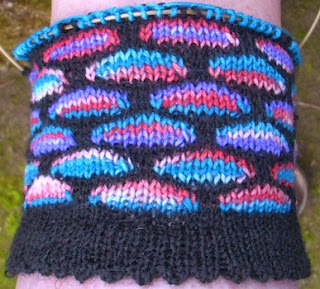 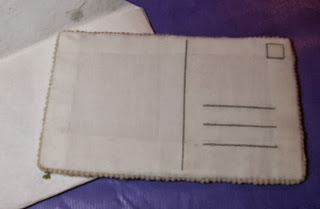 the second "first sock" I started is knitted with the very colourful sock yarn from the same dye session. I didn't like the colours very much at first, but then I thought I'd give them a try together with black. the idea was to work something like "stained glass windows" - and I am quite happy with the pattern now. the heel and toes will be all black (lots of fiddling and knitting in rows involved in the gusset:) but the foot will have the same pattern. I put on the leg part and checked if I can feel the slipped stitches under my foot, but no, it didn't feel different from "normal" socks at all. 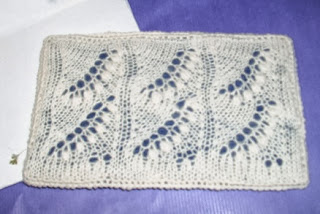 the group project for this year was a postcard exchange - which we held at the september meeting. I thought about embroidery first, felting maybe, patchwork? but then I decided that I am first and foremost a spinner and knitter. so I spun up some fine white merino yarn (single) and knitted a rectangle in the estonian lily-of-the-valley lace pattern.
actually the making-up of the card was far more work than the knitting:) I zigzagged the front across a piece of cardboard, covered in dark blue crepe paper, made up a "postcard" back in white evenweave, embroidered the lines and sewed it all together. it could be used as a real postcard, but I don't think it will be. we had lots of very different entries, and everyone agreed that we should do another exchange next year (and I just realized that I forgot to take a pic from the card I received in exchange!) 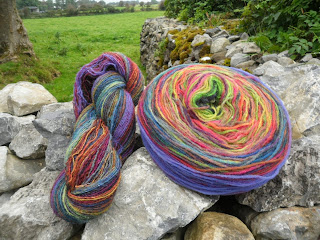 of course I always have some fibres on the wheel as well. this skein on the left is the first one spun from the "studio donegal" pencil roving I brought back from the trip up north. the colours are gorgeous, even though the yarn is a bit rough. it's not really spun for use as knitting yarn, normally it's used to weave tweed fabric, so it has to be quite durable to last. I think if they made the same colour graduation from merino wool, spinners would stampede them and buy every scrap they could lay their hands on:)

and last but not least - the forgotten fat quarters of christmas fabric I bought. some of them might be used for textile christmas cards and the greens will probably end up as binding for a christmas runner. high time to start, only a few measly weeks to go!! not to mention halloween - and the fact that I still haven't framed my cross stitching!
Posted by Woolly Bits at 15:35 10 comments: