I don't only read books - sometimes I even make things I found in a book:) this is a sock pattern I found in the book of the last preview. It's not difficult to knit, the only row, where counting is necessary is the change of direction, I think in row 8. on the other hand - I think I prefer the look of the wrong side... but it's a pair of socks, not a garment that is visible from all sides, so I don't really care all that much about that. 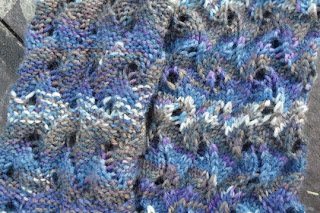 the pattern would look nicer if blocked I'd say - but I was keen to put them on and skipped on the finishing:) the pattern on the right shows RS out, but somehow I prefer the structure of the left.... 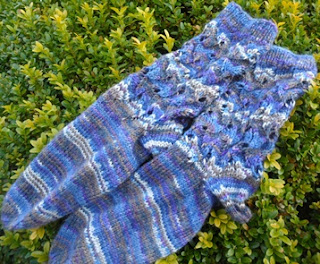 the finished socks, out of thicker sock yarn, I think the name is Regia "fjord". this time I put in an afterthought heel, because I always end up having holes in the heel part below the foot! easy to undo - and because the yarn comes in 150 g balls, there's plenty to change the heel until the rest falls apart as well:)

this one on the other hand is the first "deluge" sock. you can see the right foot shaping at the toes. there is a bit of a pattern along the foot, and then "rain drops" along the lower leg part. that's the part I like a lot. I also like the v-shape on top of the drops, but I skipped most of the patterning above, because I lacked the yarn. and I agree with another deluge knitter on ravelry, that putting pattern into the rib as well was just overdoing it a bit with the pattern. also the tbl rib doesn't stretch as nicely as a normal rib. so I changed the sock (no photo yet, weather dysmal) - I frogged to the uptter part of the v, started the pattern, but only lead the "shamrock" pattern into the rib, which runs along both sides of the leg. the rest I did partly with tbl ribs, where they continue from the pattern between the v - and partly simple k and p stitches to give a bit more stretch. the sock is wearable, so I'll make the second one at some stage. I know I'll have enough yarn because of the frogging. but I also started the pattern again in another yarn, with simple toe-up and a change in the leg part... to be continued - the never ending deluge story (very fitting for our weather just now:)

this is the proof that it is possible to untangle the mess! just don't look at the hours of fiddling it takes me.... 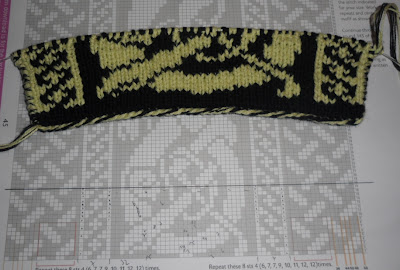 and I finally did start on my version of the Fia. this will be the border of the kimono style "cardigan". double knit in pure pima cotton, dark blue and lime green. it's fun to knit, as long as nobody starts talking and you can count your stitches in peace... I'll be busy with that one because DK knitting takes a good bit longer, but the main part will be quicker, because it's knitted in stockinette and not DK. the downside is that it isn't exactly portable knitting, too many balls plus the pattern (the yarn is very fine, I have three threads of the lime green and four of the blue - not for the impatient, because it's not plied and a mistake is very visible, when the needle splits the yarn! but so what - I know that I'll wear that one for decades, so it's worth the time).

﻿
not much to tell on the garden front - wind and rain and cold means that I don't do much outside. but the little lemon tree is nice and snug in the glass house - and has produced the first ripe lemon! and 5 more to come in the next few days.... the scent  is gorgeous, we are going to eat the first one raw to get the taste! if I don't blog for some time I might have to unscrew my eyes after this experience:)
Posted by Woolly Bits at 07:39

Love that you have a real lemon from your tree. I have a Meyer lemon, the only variety I could find. They're a cross with some kind of orange or such thing. They're okay, but the lack the acidity, taste and that lovely scent of true lemons.
The socks are great. Love the colours and the patterns, but that sweater tops them all! What an amazing garment that will be when finished. You'll have to post updates so we can follow your progress.

Oh, lovely results that the book did inspire! I like the right side of the first one-and am amazed with the second sock; why did I never think of the after thought heel because my daughter blows heels very quickly.

Hooray for the double knitting-it is going to be a knock out cardigan!

Still so impressed with your socks and your persevering in untangling 'the mess'. I have a habit of losing my 'ends' when spinning very fine...almost impossible to pick it up again sometimes!!!!

Nina - I am happy that it seems to be a real lemon! I first thought it might not be, because the lemons stayed green for so long...updates on Fia will be slow - it does take some time to do double knitting:)

Cindy - I have been yapping about the holes in my heels for ages - until I started with afterthought heels. I only make them for my socks, because I am the only one, who destroys heels:)

Ash - the mess... is in the waiting line for now (there's only so much patience in me for that sort of work:). and when I spin very fine I sometimes have the same problem, esp. with fine silk. so every now and then I lay a narrow paper strip across my bobbin, to avoid "vanishing ends"...

I'm very envious of that lemon! Especially that you have more waiting to ripen. I only got one this year, though lots of blooms. The sweater looks like it's going to be a real winner.