...how half of europe is covered with snow - but not us! ok, during the last two days we did have a few sprinkly showers, but I wouldn't even call them flakes and they melted on impact. today we've had a few rain showers, but it's lovely to be outside and feel the sun on your back - for most of the time:) I hope my remarks about being snowfree aren't premature - but I think I am not alone in saying that we've had enough of winter by now (and over here we really didn't have all that much!).... slowly but surely our garden is waking up: 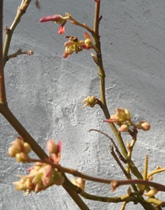 the buds on my blueberries are opening - in different stages, because all are different varieties. one of the fruits that provided pickings last year, despite the miserable summer weather 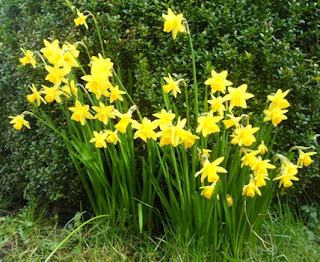 easter is coming closer, and the daffodils are trying their best right now - at least the smaller flowered varieties are. the large ones take a bit longer, but there are feisty buds all over the garden! 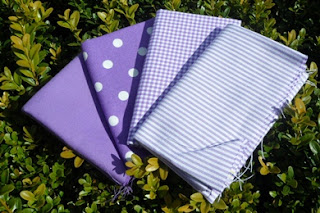 spring is a good time for new plans - not only in the garden, but also where textiles are concerned. I would like to make a grandmother's flower garden quilt in the future - with all kinds of purple/lilac fabrics. not in a hurry, I still have to collect a load of fabric, but yesterday I received the first instalment - more by accident than by design, but I am going to keep those for my future project:) I have a few leftovers and a larger piece or two in stash, but I want it to be a big quilt and with lots of different fabrics, so I'll collect for the time being. btw, if you like hexagons, have a look at this 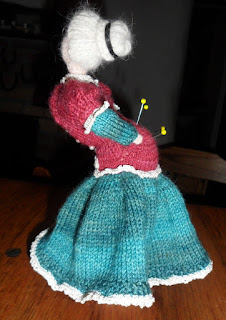 remember the oddly shaped "sock" I showed you earlier? this is the result.... a pincushion granny:) when I saw that design on ravelry, I knew that I had to make one myself. a friend of mine loves nicknacks like that, so I made one for her birthday. the knitting isn't really difficult, the design runs over 24 pages, but it's very detailed and you can mostly work a whole page in half an hour or so; the body is done in one piece, with a lot of increases and decreases (even the nose is knitted in like that!), only the arms are done separately. the garments are a different story - it's quite fiddly to pull everything together and I took the liberty of changing some of the works. in the original the sleeves are knitted with the arms inside, which means that you don't only have to battle your dpn, but also the rest of the granny:) I decided after one sleeve that this won't do and knitted the other sleeve from the bottom up (see below) and fixed it by sewing it to the top. actually this was far easier and it looks just the same.... 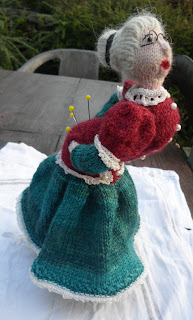 of course it's not nice to have pins in your bottom, so the granny looks rather dismayed:) it was great fun to make her bun (handspun samojede dog's hair), to crochet a lace collar and the lace on the dress - but the best bit was making the glasses from wire! maybe that was because it was the last thing I had to do?
anyway, I think at some stage I'd like to make another "autsch" - but next time I'd make the base larger, choose nicer yarns for maybe a period dress design, maybe even make the lace in bobbin lace instead of crochet. we'll see - another future project:) 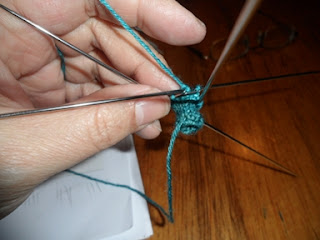 as you can see working the sleeves was fighting a hedgehog - the needles are 1.5 mm - and unfortunately rather too long for this tiny project. if I did do another granny I'd buy more suitable short dpn for this! 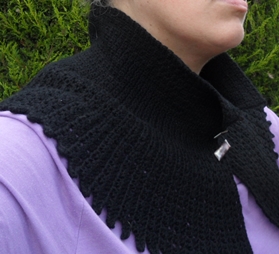 I also worked some wearables - this is a collar by Andrea Delhey, done in crochet, in black handspun merino. I changed the size slightly, but the pattern is the same - you can find it here 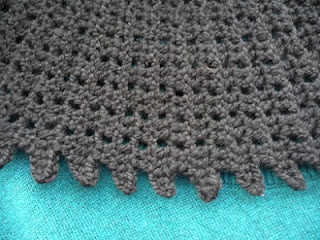 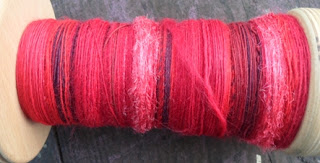 when the winter grey was at its worst, I decided I needed some colour for a perk-up, so I grabbed all the reds I could find, corriedale, throwster's waste, merino etc. and spun it all up whichever way it came. 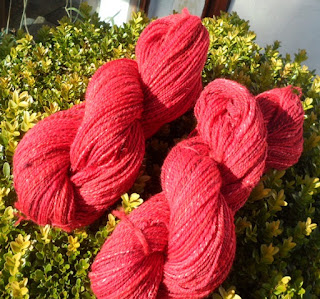 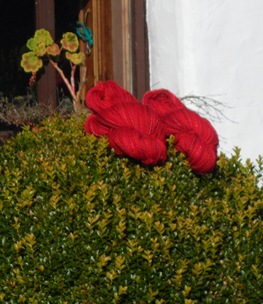 the plan was to make a 2ply in exchange for the "poison" wollmeise skein I received as a surprise mailing ages ago. I read in Kristin's blog that she loves red, so I thought that it would be perfect to cheer her up a bit after an operation she had to have. I spun the leftovers into a second skein, but there wasn't enough silk left, so the 2nd one has less sparkly in it. the problem was to catch the right colour - no luck in rain or sunshine... the slightly fuzzy one on the left shows the colour changes better, but the right one hits the colours! traffic light red:) 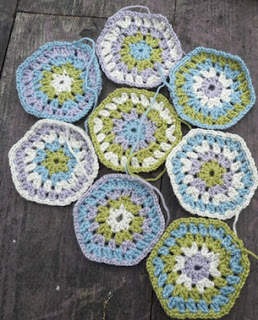 when I sit down for a tea break at the table I need to have a small, simple project on hand to work a few rows here and there. after collecting a weekly mag incl. a small ball of yarn for a long time, I packed all the yarn into a bag and forgot about it for a year or two. it was meant to be a knitted afghan, but I didn't like knitting the squares much, so I decided to make a granny square blanket instead. the yarn is sheer poly, which I would never ever use for a garment - but I think it'll do for a simple blanket (might end up in the dog's box though:)
I've also done several pairs of socks in the meantime, I am working on a "fia" (with lots of changes:); I have to start on several gifts soon - and of course gardening is starting in earnest now. but I'll still be able to make a hexagon here and there I think.... off to swing the needles:) oh yes, and I have to finish my 2nd "deluge" - I love that pattern, but I am going to knit the next pair without the fussy different toe shapes (for left and right foot).

I so envy your spring:) I started working on snowdrop-mittens, because my own real snowdrops are still under now.

Such lovely colors and Spring hopefully is around the corner in Ohio soon! :) Enjoy your's!

Spring in Ireland is famous and your pictures prove it! I wondered when the news here shows so much of Europe in the grips of winter! The granny is very cute-you did a great job! The red yarn is amazing-love all the colors-what a fun knit it will give! Nice to catch up with you!

No spring here yet but seeing those daffodils is so nice. Everything is still under snow here. Cute pincushion! There is a time and place for acrylic and a blanket is a good use for it. I made blankets for our cats, though they have to be made of wool as our cats are very picky about what they like to sleep on.

Leena - I can understand that, I am waiting for warmer temps myself, but at least I don't have everything covered in white! and the nice spring bulbs don't seem to mind the cold so much...

Pam - thanks - and I hope you can all enjoy a bit of spring colour soon!

Cindy - thanks. I am still not sure what to make from my own skein of red, but in the meantime I just enjoy the colours:)

Nina - I think cats can be fussier than dogs with that? when we had our "visiting" cat, she preferred to lie on woollies, to! the dog - doesn't care, as long as it is soft and warm:)