... for this year:)
just a few more hours and the old year is gone. I had planned to write sooner, but christmas got in the way, as usual. and yesterday blogger didn't like me - I couldn't open the blog, never mind put a new entry in. it still doesn't do what it is supposed to - the new header picture just doesn't want to stay in the right size. but you can see the weather we had over the weekend - mostly sunny during the day, but pretty frosty (down to minus 6 deg.C) at night. in the morning everything was covered in white and the dogs, who like to drink "dirty" water from buckets etc., got a shock - because their lovely water was replaced by discs of sheer ice:) the look on their faces - they ran from bucket to watering can (emptied out) and to the pond - nothing! what a relief to find the water dish inside full to the rim:)
nothing left of that today - most of the day we had either drizzle or rain plus a lot of wind - and the rain is going to be stronger tonight. lovely - it seems we have to light our sparklers inside the porch again, just like last year!
I did manage to finish all christmas gifts in time, but I only realized yesterday that I forgot to take some photos. never mind - I did take a few at least. I also spun bits and pieces - but again, I didn't take pix - yet! I hope the new year brings improvements to my forgetfulness - there's room for more!
anyway, here are a few of my "fiddles": 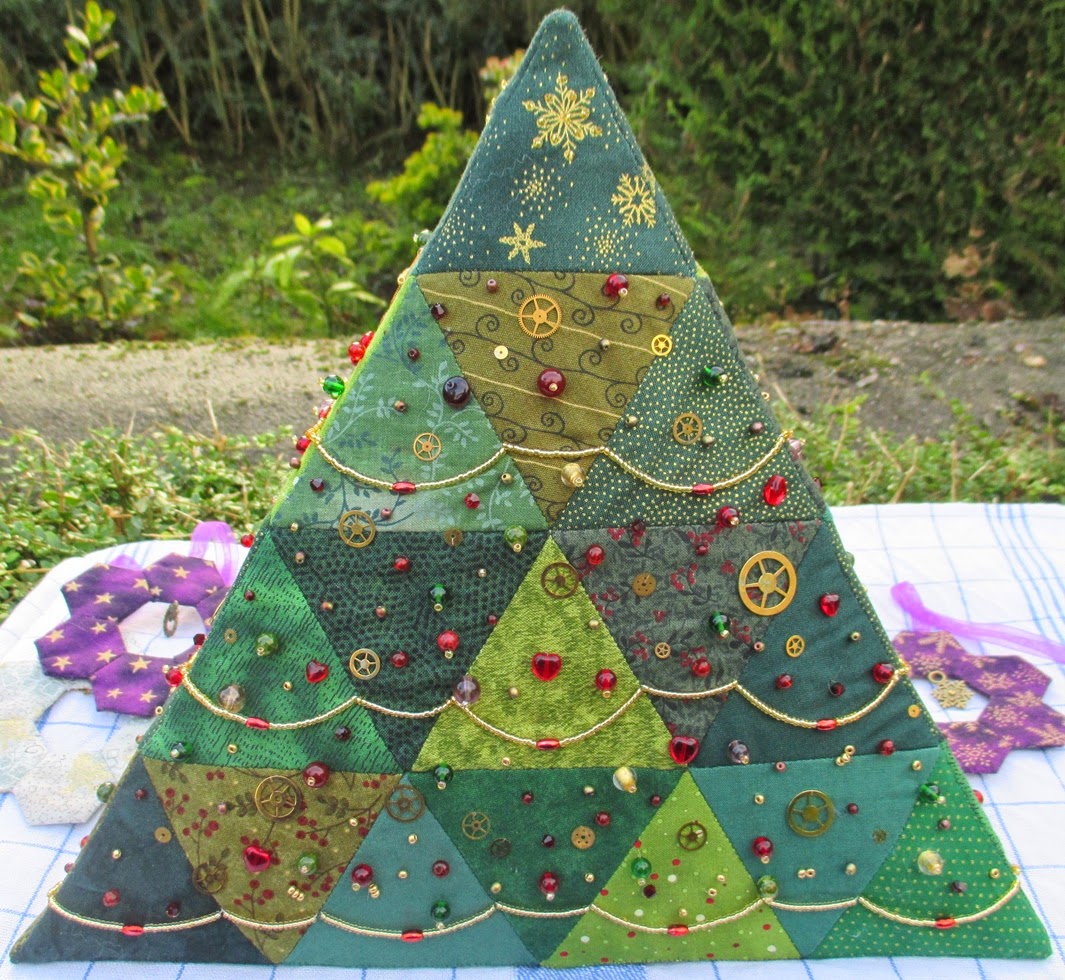 I made a "christmas tree" in patchwork. I had planned to make one on a wall hanging, but I realized that there won't be enough space to hang it in the recipients' home, so I thought a 3-D pyramid to sit on the table might be easier to put up. originally I had planned to make a foot/trunk, but after I put the bottom in, I liked it better this way. putting on the beads was a real fiddle, because the inlay is so tough that my beading needle looks like a hook now:) but I managed with a thimble and patience... I have the base of a second one ready, but the plan is to put on more of the "chain garland" and less (or none?) of the single beads... 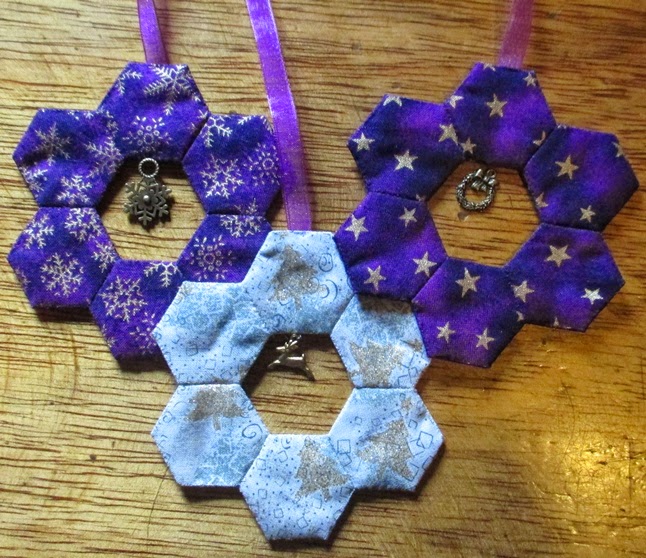 seems like I am on a patchwork roll just now - I also made about a ton (ok, maybe around a dozen:) of those  decos, little hexie wreaths with a christmassy charm to dangle in the middle. I made batches in red/green/gold and one in purple and neutral, all to be given as small tokens - they fit nicely into an envelope with a christmas cards.
I also made most of my cards, but nothing textile - and of course they went out before I took a picture.... 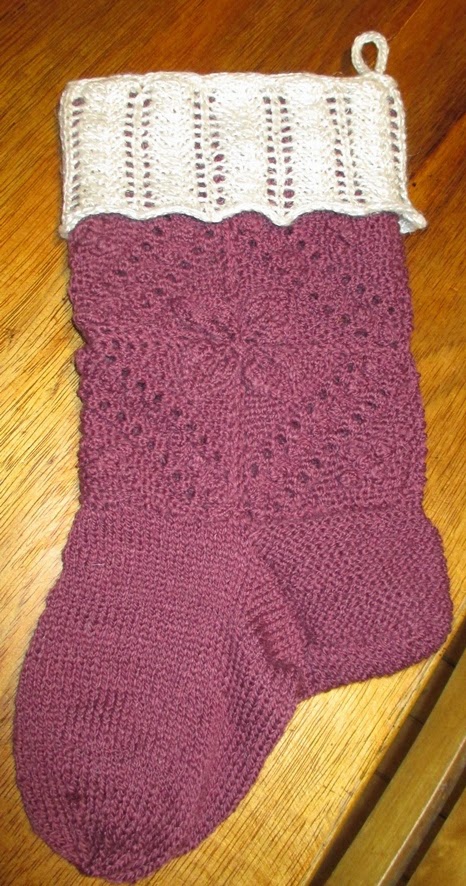 and I knitted my very first chimney sock! I've had a book with patterns for ages, but when I need them, I usually need them urgently - and end up making one out of felt! this one is knitted with leftovers of handspun in "rosewood" and a lacy edge from handspun silk/linen. in real life it's much bigger of course - no point in making tiny chimney socks (where would you put the goodies then?)... luckily I only need one of those, given the fact that I seem to suffer from single sock syndrome at the moment. I did finish one pair for DH - out of a "new" sock yarn, 8ply, a good bit chunkier than normal sock yarn. I think it's too thick to wear the socks in normal shoes though - but they warm birkenstock-clad feed nicely:) what I didn't like so much was the ball size - way too much for all but the biggest sock sizes, but not enough to knit a second pair. I compromised and made wrist warmers out of the leftover yarn, because I only bought one ball to try - and wouldn't have any other suitable sock yarn to use it with! 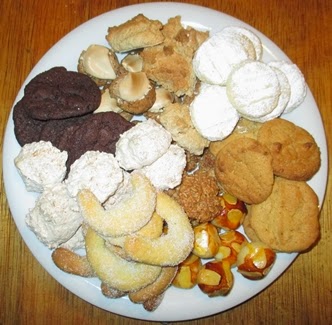 as I said I made other things, spun some yarns etc. - but this will have to do for now. I'll try to be better with picture taking - but at least I took one of my cookies! most of them rather last-minute, and I didn't do a single "cookie cutter" variety this year, but at least they taste nice, even if they don't look fancy!
time to get ready for the changeover - no new year resolutions for me - they usually only last for a few days anyway!  I hope all of you have a wonderful year to come, always enough fibres to play with and enough time to try out all your ideas!
Happy New Year!
Posted by Woolly Bits at 13:25


Beautiful catch up post! The stocking is so pretty! You have some nice things going on-I would love to snack on those cookies with you! Have a very happy new year!

Happy New Year Bettina! I hope the year is full of wonderful projects. I love the patchwork projects. The tree looks great ith all the beads, but I can imagine it was a chore. I especially like the hexie ornaments. Is there something to stiffen them like interfacing or cardboard?

Cindy - thanks - I'd send some cookies over, but I don't think they'd arrive in edible condition:)

Nina - thanks, I have a long list of projects I plan to do - we'll see how far I get it done:) the beading on the tree was probably made worse by time pressure - I should really start earlier with my gift making! and there's no interfacing in the ornaments. I work two rings of 6 hexies. put them on top of each other and close the seem in the middle. then I fix the little charm, take out the paper pieces, hold the hexies together with paper clips and sew the outer edge (and fix a ribbon for hanging). one quick ironing, all done. they are stiff enough at that smaller size - if you used larger hexies that might change though!

happy new year to you all!

The tree and wreaths are so cute! You are so creative. The cookies, now, they look divine!

Not sure what's up with Blogger. They've been "improving" again, which is always a headache.

Leigh - thanks, I am just working on the 2nd "tree" - to avoid having it flying about half-finished until next december:) no worries about the cookies - most of them are gone by now! and in my experience electronic "improvements" are rarely that for users, quite the opposite, grrrh:(

Nice post. Happy Knitting New Year from the Northwest corner of the U.S.