so, now you know all about "shadow" (I do wonder what her real name is!). isn't she gorgeous? ok, full of mischief, but adorable, too! I do hope we'll find her owner, even though I'd love to keep her. but then she is still young and full of funny ideas - and our old Dobby is a bit overwhelmed by so much attention. because of her injured hind leg she can't play and fool around for long anymore, something shadow just doesn't understand. and I am sure she's still growing - also a little bit of an elephant (little miss trample....)! we don't really have the time to train her properly just now! the trouble is that she's so cute, that it's hard to tell her off! she just makes this clown face, "grins" at you and shows her tummy - it's not easy to be angry at her when she does that:)
I did do a few other things in the meantime of course. I've been crocheting and knitting dish cloths out of leftover cotton yarns. no pictures of those, went straight into use. I also used a few smaller balls of fine cotton, which I found in the recycling center a while back. the colours are "wake me up and do the dishes", right?:) 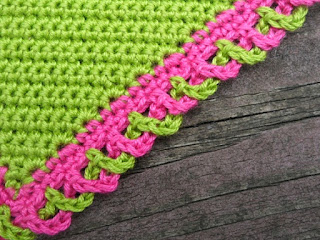 nothing special really. just single crochet, half green and half pink, two triangles. I tried to make the edge a bit pretty by adding this 2coloured pattern... simple to do, but quite effective. I have nearly a full cone (1kg) of the green - and nearly 2 full ones (2 kg) of the pink! what am I going to do with the pink especially? I also have a softer yellow, which would go well with the green and tone it down a bit, but the pink I have no idea for. no garment for myself, that's for sure - I don't want to stop traffic on the road!

I finally got around to blending and spinning my white to black sequence. the smaller pieces are the top as it came, the fluffy bits in between the blends I made up from them. 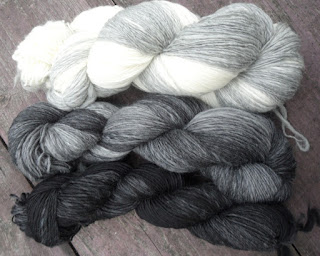 in hindsight I should have blended one or two more batches with the white, because all the colours flow - just not the white to the first grey. I think I'll try the revontuli with it, probably from black to white, because I have more of the white yarn. not sure if it will be enough though... 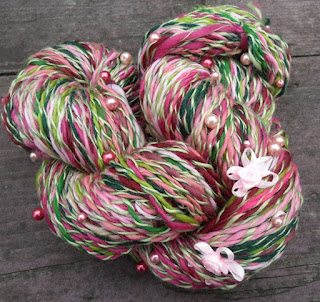 when I showed my fairy-tale yarns at the last spinner's meeting, one of our members fell in love with "rose red"... she was so enamoured with it that she even wanted to buy it, but of course I still need it for the full project. when I stumbled across the leftover pink and rose tops at home some time later, I thought I'd just spin up the rest and give some to her. it's a bit "greener", because I only had light green soy silk to ply with, no pink silk left. I added a few ribbon roses and hope she still likes it slightly changed (if she doesn't, that's ok - I'll just keep it:) 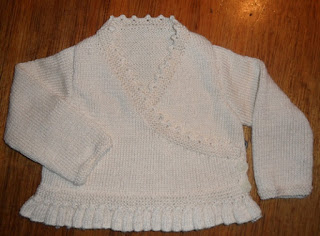 I also finished the first of two baby cardies, the second one is on the needles. simply done, like a ballet wrapover, just with a little frill at the bottom. it's soft and fine sea island cotton - though I have to wash it again now, because Shadow, aka the "uptonogood" dog, had to wipe her nose on it:( 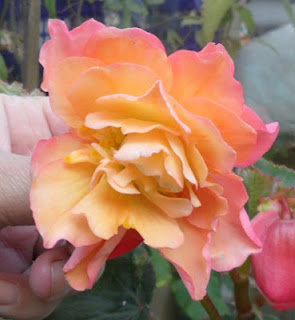 and I am way behind in the garden - too many other things have to be done right now! and a nosy dog, digging holes in my veggie plot as soon as we get there isn't really helping. though I am sure that she's very proud of herself, fertilizing the plantings and jumping on those ugly small polytunnels to flatten them!
I did wonder about one of my new plants though - I bought two tubers of begonia odorosa. this is one of them in flower. they are a pinky-red on the outside - and yellow on the inside! 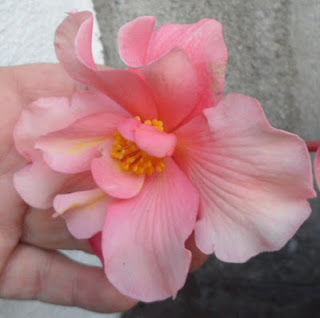 oddly enough, the other tuber, supposedly the same, flowers like this. practically no yellow and single, not double blossoms. it's not the odd one out, none of the flowers show any yellow or double petals! and the oddest thing to me - they have no scent whatsoever! why is it called odorosa then??? anyway, they both do look pretty, but it's not the first time I get mix-ups like that in my flower pots!
this is it for now - it's oddly quiet downstairs and given that nobody has claimed shadow yet - I'd better get down and check what she's been up to.... I do hope that somebody rings about her soon - or our house will need a complete makeover:)
Posted by Woolly Bits at 04:51

Lovely post! I love the white to black yarns-it is going to knit up in an amazing way! The pink / green is eye popping but in a cheery way. The flowers are stunning-especially the yellow to pink one-I told you the dog HAS found a permanent home...

That green dishcloth is really quite a summery reminder with it's brightness. If you have any dull, grey weather, it will be lovely to have in the kitchen! I do love your black and white yarns. They are very elegant. It's a really nice contrast with much of the modern colourways we find around here which are often super saturated colours or odd combinations of the same, which sometimes don't quite work.

Cindy - DH is usually doing the dishes, so I hope he is suitably cheered by the nice colours:)
and no - the dog is gone again, what a weekend!

Nina - I hope I'll have enough yarn for the shawl, because it wouldn't work to just spin more. I'd end up with a big white stripe at the bottom, couldn't add more of the other colours without ribbing. what's life without a bit of risk - even though I might end up with a neck warmer instead of a shawl:) I was thinking about adding just one splash of colour somewhere, maybe a little bit of pink or red - but somehow I don't think this would work with the revontuli pattern.

The edging on the dishcloth is just beautiful! I wish I could crochet - let along create something that lovely. And I love the baby cardi - may I ask where you got that pattern? It's so lovely as well!

Susan - thanks, why don't you give crochet a try? it's really not that difficult and all you need is a hook and some yarn.
the baby cardie is from a uk magazine "the knitter". but it's here on ravelry, too - maybe you can find it?
http://www.ravelry.com/patterns/library/little-frou-frou
easy to knit, all stockinette, apart from the little frill at the bottom...