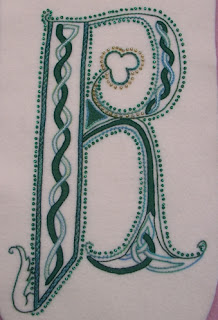 I finished the second letter of the bunting - the R. just in time - a day to spare:)) well, at least I didn't have to do a night shift, wouldn't be the first time either... though I shouldn't glee too early - might still happen when I am doing the christmas presents:))
when you look closely (probably not visible in the pic) the yellow of the iron-on transfer is still visible in a few spaces, but I hope we'll always hang the finished bunting high enough so that people can't push their noses right onto the embroidery:))) taught me a lesson though: don't go over a drawing with another iron-on pen; make a new pattern to avoid that mess!
the little dots are all beads, though in hindsight I don't really know why I wanted to do the little clover in golden beads. but I am not taking them off again now! after all this embroidery I am going back to my houses in x-stitch for a while, because I want to finish this before it ends up as a UFO in some corner again. and also, a christmas sal is going to start soon, hopefully enough motivation to get the wall hanging done as well..... 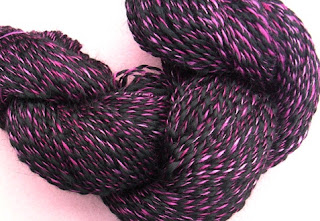 I also finished the first skein of black alpaca with pink silk and I do like how it turned out. it's not too flashy, the black dones down the shiny pink nicely. I will have to spin another bobbin full of alpaca though, because the fine silk runs so far. not sure if even the second bobbin will use up all the silk, but I still have enough, so I'll end up with a nice long yardage for a bigger project in the end! any ideas? it's nice and soft, so very wearable against the skin..... 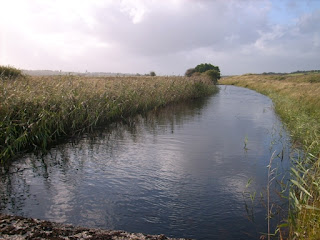 we had an exceptionally bad summer this year:(( a lot of rain and cool weather pretty much from may onwards - and here you see the result. this is the river glore, which flows into the famous river Moy eventually. it runs through the valley downwards from our house and normally only has about 2/3 of the water it has now! or less in a dryer summer! it is very wide just now - too wide for me to reach any of the lovely reed flowers I usually pick there at this time of the year:(( I managed less than 100 g - not enough for any serious dyeing. luckily I visited another spinner last week and we managed to pick a good lot more along one of the roads or there'd be no "reed green" for me this year. as it is I have 3 skeins of sock wool, one in the brighter green, two slightly more muted - and 300 g of "spring green" south american top. all still damp, so pic will follow. I do like the reed greens together with purples and lilacs - so I'll be mixing both, my reed dyes and some of the logwood dyes I did a few weeks ago.
first I have to finish the leftover on my Lendrum though - a blend of wools and silk, in salmon and greenish tones. tomorrow is our spinner's meeting and I'd like the wheel free to start something new. because I have several things started on both wheels I had to take the black alpaca off the louet bobbin into a ball to ply with the silk, not ideal, because I had to give it a bit of twist to work with the tighter spun silk. I had to work out kinks several times and I prefer to ply from the bobbin/lazy kate!
now, to decide which fibres to take for spinning tomorrow:)) spoilt for choice! maybe I should finish the fine silk/wool blend for a lace project? or should I grab some of the newly dyed fibres? anyway, I have to pack most of the dyed bits to bring for the group - which will give my room a very slightly emptier look (if that's possible:)) than before.... next week will start with a lot of sewing - I have to get a "door" curtain done and one for a small window. and the tweed/fleece sofa blanket - finally! and a box full of other things - some embroideries that need a backing, a small wall hanging for up here and so on... this of course would empty the heaps of stash much more efficiently than the fibres could, but with all the rushed embroidery going I didn't want to start dragging the sewing machine out as well. a studio with space for everything - hach, that would be very nice!!
have a nice weekend - hopefully with time for your own textile endeavours.
Posted by Woolly Bits at 07:10

The black/pink yarn turned out beautifully! It will make a nice shawl, is my 2 bits! Glad you finished the embroidery on time-enjoy the spinning tomorrow!

Cindy - thanks, I am just getting my "bits" together for tomorrow - always takes longer than I think! if I use the yarn for a shawl, it'll have to be a rectangle - I don't want to give the shawl away and I don't like triangular ones so much myself. it has fluffed up a bit after washing - will probably be veeeery warm once knitted... I should have moved to the arctic circle:))

I love the finished embroideries. It was well worth the work you put in because they are lovely.
I love the pink and black plied yarn. They look so right together.

I've not yet dyed with reeds. Good greens are wonderful to find.

What unique embroidery! It sounds like you have all sorts of neat fiber projects in the works. Enjoy your spinning!
Have a great weekend,
Judy

Nina - I've had similar problems, I have to sign in all the time and it still looses some of my comments:((
looking forward to knitting with the black/pink - after washing it is very soft, but still smooth and silky... I just have to spin more black alpaca, because the bobbin of silk lasts so long:))

Judy - thanks, it was quite impressive to see all the bunting pieces together on saturday! very mixed techniques - but perfect to show our very mixed group:))