...and lots more! on wednesday the roads were snow and icefree... didn't last long though, thursday evening it took all of 10 minutes to cover everything in a white blanket! the header photo is from yesterday - before the next batch came down! by now we have between 20-30 cm of snow - and more, where the wind blew it into heaps! I like winter, really, I do - but does it have to be so much? and this evening the running water froze - also again! back to pots on the stove and carrying buckets:)) DS was happy though - he had no school yesterday - and the way it looks, this will be it until the new year! the postman did make it again today - we'll see if he manages tomorrow as well (more snow to come apparently!). today we could see that his car flattened the snow in the middle of the road - if there is much more, he won't be able to drive down, I guess!
this is the polytunnel - with some of the first snow load removed - but I can't reach the top! it was covered again last night - with about the same amount on top of yesterday's load... it's very dark inside, gloomy and cold.... 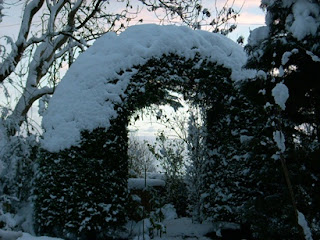 I took some photos today - it is interesting to see the garden in the snow. everything looks different, and the structure of the garden becomes more visible. this is one of our "gates"; we have planted pairs of trees in different spots and prune them at the bottom and on the outside, but not in the middle, so that their branches knit together in the middle to form a doorway. it looks a bit like going into a different room:))
I spent the day with filling up the bird feeders (they are ravenous now, with snow everywhere), trying to keep the paths around the house snowfree (and the evergreens, to keep the heavily loaded branches from snapping!)  and clearing away some of the stuff I used for making cards, presents etc. I managed to send away all my christmas parcels - but they might still be delayed, because there's mayhem in germany as well! apparently trucks are barred from driving right now - they are all stuck in some laybys along the autobahn:(( I think I've been lucky - most of my amazon order from the uk arrived extremely quickly - I am just waiting for one book that is sent from germany, no rush with this one though.
of course I spent most of the last weeks with presents. this is a pattern I found on ravelry - a mole in a hole:)) I couldn't resist it - I think I have a new addiction: tea cosies! by now I have several books with them and my fingers are itching to make some more. this one was a bit problematic, because I only have one teapot here. and I know that the recipients' teapot is larger - but by how much? difficult to guess and asking would of course be a giveaway! so I used pure wool (the green is kilkarra tweed, the rest is handspun, and sockwool for the mole). the mole can be removed and the whole thing could be felted if needed. it has two layers, the inside is lined with more kilkarra knitting, to keep the tea hot for a long time.... difficult to take a photo, when there isn't a large enough teapot for underneath - but you'll get the drift. 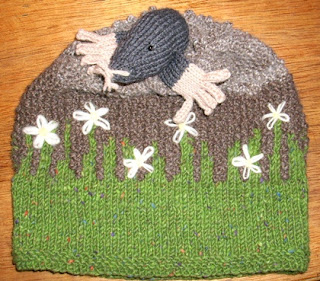 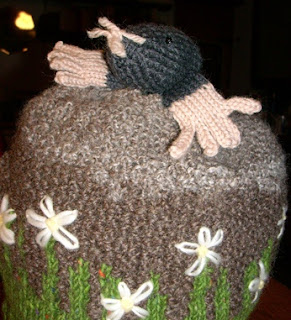 the pattern is easy to knit - afterwards I thought I could have done it on a circular needle and just knit rows, where I need holes for the pot. the only fiddly bits were the "fingers" of the mole - but not really difficult, just narrow i-cords.
now I would like to make one for us as well (at least I have the pot to check the size:)) - but it's hard to decide for a pattern! a "normal" one? or one with a funny shape? or one totally over board - like some of those? we'll see, I have to make one more christmas present - and then I can start on a new design!
anyway, my plan for next year is to finally get a few things done for my own home (did I say this last year already?:)) - not only a tea cosy, but also some cushions, one or two carpets, a new bathroom curtain etc...
Posted by Woolly Bits at 12:34

Wow, that is a ton of snow for you! I love, love, love the tea cosy! Very cheerful!

That tea cozy is brilliant and fun! I love it. Too bad about your snow. It doesn't matter how much snow falls if the communities don't normally get that much, they can't be prepared for it. We've been hit with lots too. Nearby they got over 1m in 2 days. The town had to ask for help in clearing it because even though they are prepared for snow, they weren't for that much.

Nina, I think 1 m - would bring the country to a standstill here! wow, can't even imagine that - you open your door and can't get out! a bit of it for a day or two is fun - after that it becomes a total nuisance:))
the cozy was fun to make - and I am going to make some more soon, thinking of making my own design, at least the deco...