I know that artists and writers sometimes talk about having "painting block" or writer's  block..... I think I must have had knitter's block, when I knitted the second sleeve for DS's new school sweater... maybe my brain cells are frozen? or I was so bored with knitting that much stocking stitch, that I was slightly addled...anyway, I finished the first sleeve and started with the 2nd right away. the first lay beside my chair all the time, I counted stitches and checked several times - all the time wondering, why the rib on the second one is so much tighter than on the first... I even checked the needle size! 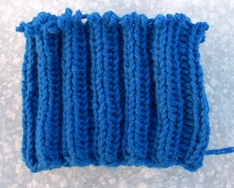 this is the second rib.... (after taking it off again) 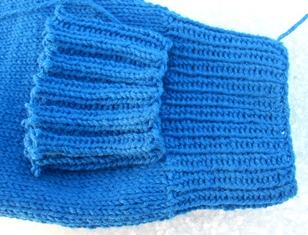 and here you can see the first one below and the second one on top! I don't know where my head was when I didn't see - that I knitted 2 k, 2 p instead of 1 each - but I did! and only really saw my mistake, when I had nearly finished the 2nd sleeve... I couldn't just leave it like it is - it would drive me nuts to know this:)) eventually I took off the second rib and knitted a new one (this time correctly:))

- in the opposite direction. once it's worn the difference won't be visible anymore... but sometimes I wonder about the partial blindness that one can develop and not see the obvious:)) by now the sweater is finished and I am glad to get rid of stocking stitch for now!
when I took the rib photos I went outside to the garden table. which is covered in snow, but on top of the snow the rain during the last few days together with the hard frost we had  formed tiny icy needles. not only do they sparkle like jewels in the sunlight - when you touch them slightly (with the knitting) they make a sound like chimes - very pretty! my table looks like covered with a sparkly terry cloth:)) or one of those fancy lash yarns? oh, yes - we are still frozen in - and despite the slightly warmer forecast for the weekend I have my doubts that the roads will be free of ice again any time soon. the next cold spell will come next week already!
Posted by Woolly Bits at 14:32

Aarg! Can you believe the rib would betray you like that?!!
I couldn't leave it different either, good job! I sympathize about the cold, it is drilling! At least we don't have the snow to contend with.

I'm having knitters block and indeed Christmas preparations block too. This seems to happen when I Have time on my hands, I'm not inclined to use it properly. Maybe I'm too hard on myself, cos when I look around I have gotten lots of knitting done, small projects, but I can't talk about them as some are pressies.
On another note, I made some yummy jelly with my chaenomeles on your advice with the addition of some Bramley apples. It made the most wonderful jam/preserve, and I got lots from it. Thanks for the advice

Whew, glad to know I'm not the only one who does things like this? :o

Cindy - not sure that hard "bare" frost is better for the plants. the snow is supposed to give a bit of "warmth"... I wouldn't mind bare frost on the road though:))

Ger - I tend to suffer from this "empty space syndrome" whenever I finish a larger project. usually I am in a hurry with those - and when I have finished, I float. I could start something new, but can't decide what to start:)) and usually waste a day or two with diddling about...

Leigh - this was a first for me, but I remember a sweater, where I tried to set in a sleeve the wrong way around - twice:)) now I can laugh about it, but at the time I was so annoyed with my own stupidity, that I hated this sweater and barely wore it:))