it doesn't seem so very long ago that we had a hard winter with lots of snow and ice... and now - it's back again already! when I cycled back from town yesterday huge wet flakes dropped out of the sky and this morning it looked like the photo above. I do like snow and cold winters - it's just that we were supposed to have the last spinner's meeting of the year today! I would have liked to go - but even though the snowfall had stopped, the roads were very icy this morning. and probably will be again tonight!
here a few photos from the garden: 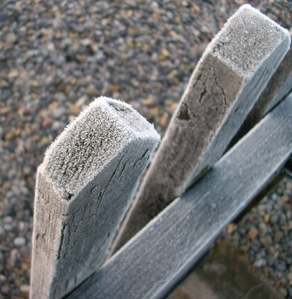 the slats of the front gate were covered in tiny ice crystals early in the morning! but the black timber warms up very quickly in the sunlight, one hour later there was nothing left.... 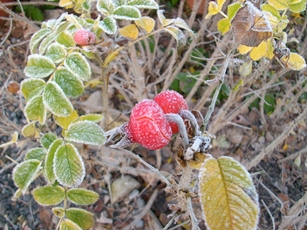 we picked most rosehips for jam, but a few are still left on the shrubs. their ripe red colour is like a little beacon in all the grey and white out in the garden right now! but the birds seem to prefer the leftover crab apples, there is a small bird war going on at the moment - apparently about who is going to get which apple:)) no need to fight - we left plenty for them on the trees! 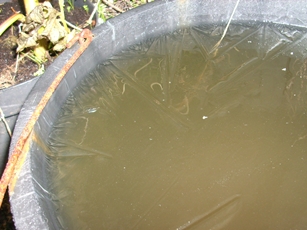 this looks like a bucket full of water, covered with a piece of saran wrapping... but it isn't, it's the first needles of ice forming on the water yesterday! this morning the ice layer was solid - time to empty out the bucket, before it cracks! the weather is supposed to stay this cold and the few degrees above zero are not enough to thaw the growing layer of ice completely....
I also brought some of my more tender plants in pots into the dome, which isn't totally frost free, when the temperature goes further down (like last winter!), but should be ok for the next few days - I hope!
well, if you can't change them,  you have to make the best out of things:)) I didn't spin, but I managed to do a few other things - take out the advent deco, prepare the windows for candles etc. this time I learned my lesson and cleaned the snow from the pathway to the front entry immediately - last winter we had an extremely slippery surface there, because the compacted, slightly melted snow turned into sheer ice, which made walking (esp. for the postman!) extremely hazardous. we also had a nice spice cake just now and a hot cup of tea tastes better, when you have done some work in the icy clear air outside!
tomorrow is the first advent sunday - time to put up the lights and some decorations. we don't put up a christmas tree this early as our living room is small - and I would probably go nuts, if I had to walk/work around it for more than a month. but I do put up at least part of my textile decos now, and bit by bit the rest will be put up as time allows. normally I would have made a poppy seed stollen for tomorrow (our very own tradition:)), but I made a cake for my friend, who usually takes me to the meeting - so we still have plenty for tomorrow to eat. in contrast to normal stollen (similar to a christmas pudding, but slightly more "doughy", with a yeast dough base) the poppy seed stollen doesn't keep fresh for a very long time, so I prefer to make a fresh one when needed. and from monday onwards I'll start making cookies.... it already smells like christmas, cinnamon, cloves and baked goods give the kitchen this warm, glowing feeling that I associate with christmas!
time to light the fire - and pull out the knitting!:))
﻿
Posted by Woolly Bits at 09:37

yes, and we got even more snow last night - everything is pure white and the sun is blindingly bright:)) this is the way christmas shoud be:)) a bit early though....

Lovely photos! I had to break ice on the animals water buckets this morning. I imagine my garden will be slowing down considerably.

BTW, with Advent starting today, you must be pretty close to launching the new recipe page on your blog. :)