halloween is over - the K&S is over - time for christmas preparations:)) yes, I am not joking, of course I am already busy doing presents, otherwise I'd never be ready in time (it's hard enough as it is:)). I already know that I won't be able to embroider all the cards I need, but I prefer to send handmade cards at least, esp. to people, who's only gift from me will be this card. so I started to get a few things, stamps, pencils, glue, and a mag or two with freebies. and then I started, this is the material I spread all over the table last week: 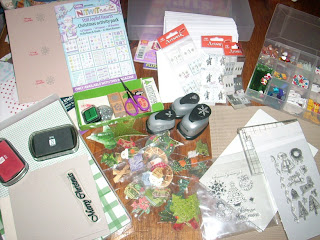 lots of bits and pieces and at first I was a bit lost - I finally got going by making one card from a magazine. after a little while it became easier and I managed to put some together without mag. samples. 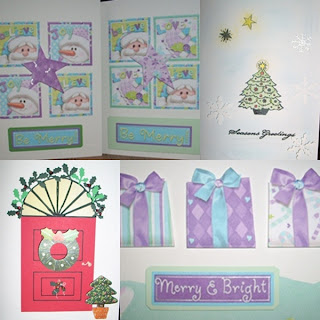 I esp. like the effect of crushing pastels on paper and working a shadow-like effect  around the stamp, which gives a bit of a glow to the stars on the left. I also like the 3D effect you get from fixing things with little foam "pillows". it's fiddly, but it does look nicer than all flat cards.
and then I had the idea of cutting a window into the card and put see-through plastic into it as a door window. my georgian door complete with holly greens, berries and a wreath - you can see them all over the country around christmas:) I have to say though that this was quite labour intensive and if I made all cards like that I wouldn't get any other things done before christmas:)) 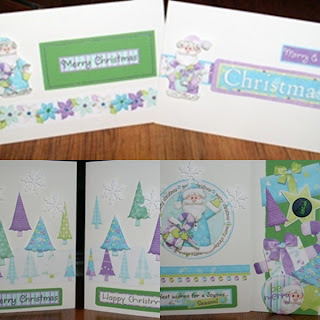 a few more examples - I also found a link with free fonts - and even a few about christmas, handy if you want to personalize the greetings a bit!
once you have cut out all the small bits and pieces, the finishing is fairly straightforward - but you do need patience and sharp narrow scissors for that - or buy die-cut bits instead (like the wreath and topiary on the "door" card). 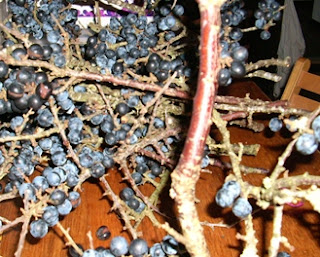 of course I don't spend all day every day making cards - yesterday morning we had lovely sunshine for a while (before the storm and rain hit us again!). and I went out to get some sloes.....most years the trees don't carry much, but this year has been exceptional! when we arrived in the bog, the first rainclouds arrived and I decided to cut back the wild sloe branches and carry home the branch tips with fruits. it was nice to sit in the warm kitchen, rain lashing down the windows - and picking sloes:)) I'll steam-juice those and make jam, 50/50 with pears, because pure jam/jelly would be quite tart. 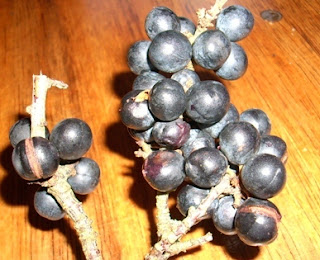 look at those sloes - nearly as big as cherries - and some branches were so densely packed, that they look like grapes! 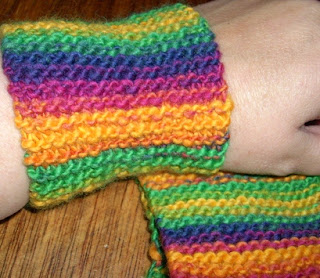 and this - is a very special project to me. you might say: bah, just simple wristwarmers in garter stitch. and you're right - but! I didn't knit them - DS did! he started to knit in school, at first a bit wonky, but he's pretty good at garter stitch by now. the yarn is handspun (by me, he doesn't want to learn how to spin:)), so any irregularities are mine, not his. he made wristwarmers for himself, wore them to school  - and his friend asked if he'd make some for him too. he did - and then I joked and asked: and where are mine? at first he told me to make some myself, but eventually he relented and now I am the proud owner of my first and only pair of wrist warmers! I am not usually cold, but if I am now - I can walk around in style:)) there is still quite a lot of yarn on the ball and he has planned to knit it all up into more wristwarmers.... I think I should introduce him to purl stitches soon....
Posted by Woolly Bits at 15:58

I tried hard to teach my three sons how to knit-talk about the impossible dream! Such a great job your DS did with his knitting-terrific! Do you know, this is the first time I have ever heard of a sloe let alone seen one! I am going to google it to learn more! They sure look pretty-can you use them for dyeing, too?! :')

Those wrist warmers look suspiciously like my blankets in miniature. Well done son.

Janet, if he had to do blanketsized things, I think he'd stop immediately:)) as it is he is knitting one warmer after the other. I have a feeling that before christmas half of his school pals will run around with rainbow-coloured wrist warmers:)) he might become famous like Kaffe Fassett in time - I'll show around his first projects proudly then:))