progress in some areas

I did promise some photos of my latest textile endeavours - here they come.
the first one is a big, fat skein of yarn in the colourway "shell seekers" from Gabi in germany. some time back I knitfelted a large bag and added shells and pieces of beach glass to it. Gabi liked the colourway and I received a large (1 kg) batt of handcarded wool in those colours as a thankyou for agreeing to let her "use" the colours (even though she didn't have to do this - after all I am not the designer of beach, sea and cloudy skies - but I was happy nonetheless:))
I divided pieces of the batt widthways and spun quickly (and a bit uneven, but not too bad). while spinning I thought about plying this and how to go about it. I am not the greatest friend of navajo plying, but I didn't just want to make a 2ply without considering the colour changes. eventually I gave this a try anyway - but whenever I was close to running out of the suitable colour on the smaller bobbin, I took the surplus off the larger one and wound it into small balls. then I continued plying. eventually it evened out - after 2 skeins of wool I have no small leftovers, everything fit nicely. I washed and dried the yarn and I am quite pleased with the result - the yarn is squishy and it looks nice to knit with. I think it's going to end up as a nice afghan - in time (just not right now, I still have 2/3 of batt to spin and I don't want to start knitting before I am finished with the spinning). 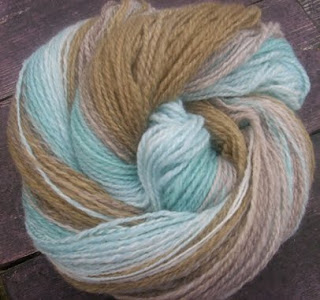 I also finally dyed the three pre-wound balls of sock wool. when I saw a leftover jar of red dye on the windowsill, I decided on a whim to use this - before it spoils! I put the three dry balls of wool plus the dye into a deep baking tray and left this over night. the next morning pretty much all the dye was taken up. so I just grabbed another jar - blue - put it into the tray, turned the balls over and let it soak. after 30 minutes in the oven - I have sock wool for three more pairs! and only when I wound the balls into skeins (still damp, for faster drying) it occured to me that even though I used a different method, the outcome is pretty similar to the yarn I dyed for the "tree of life" socks. duh, I used the same colours - what did I expect? there's one difference though - because the inner part of the ball took less dye than the outer - the whole colour scheme shifts from light to dark in one skein! is it just me or does the colour scheme look "american"?:)) (you know, blue/red and white) 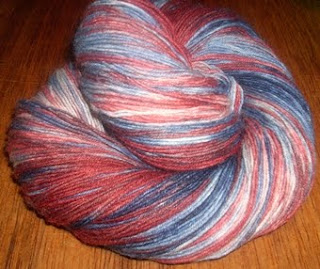 there's also progress on the spring leaves shawl - in the very green food dyed sock wool.... it's not blocked properly, I just pinned the knitting to a felt board to make it more visible. it'll take some more time, I am only 1/4 finished.... but I will add some "leaf beads" in green glass on both narrow ends of the scarf; they are already in the box for finishing. a lucky buy when I was hunting for some simple black rocailles. the scarf came into my mind - and into the shopping trolley went the leaf beads; 50 in all, because I did it on a whim and wasn't sure how many I will need (I am still not sure, I just wait until I am ready to knit in the beads - I don't want to add too many or the scarf might pull down with their weight!) 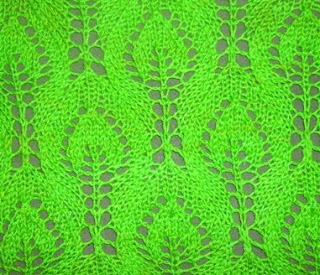 oh yes, did I mention that I need to separate the two threads again with all three of the red/blue/white skeins? sometimes I think I am my own worst enemy:))
Posted by Woolly Bits at 17:09

Love your skeins-yes, one does look more american than the others! Nice work-won't it be fun to knit!?

or maybe it looks french? you know: blue/white/red -> le tricolore ;o)
I love the supergreen *g*
U^^

yep, maybe that too:)) luckily I have enough, so I don't need to decide on either one:)) I probably thought about "american", because there is a chapter in the xrx home knitting book with loads of patterns in those colours....
and yes, the green is an "eye opener":)) (aka blinder?)