before a new and exciting (at least where fibres and textiles are concerned) year starts, here come a few of the finished projects I've been working on during the last few weeks. 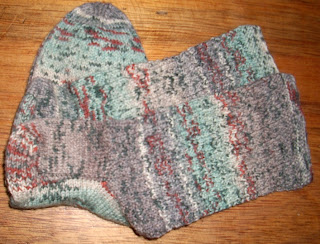 the above socks aren't really exciting; my normal way of knitting socks, but I like the colour "Alaska" (reminds me of lichen, moss and wintry trees) and because it took me quite long to do the 2nd sock - they deserve a virtual outing:) by now I know that the doubled up lower part of the heel works well - the other pair I worked like that hasn't shown any signs of thinning yet, despite my wearing them as much as I can! so I am hopeful that this will save me from mending for some time ... 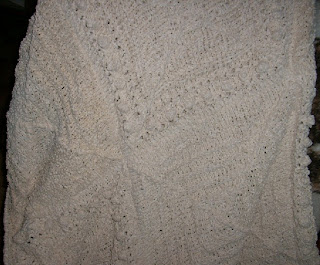 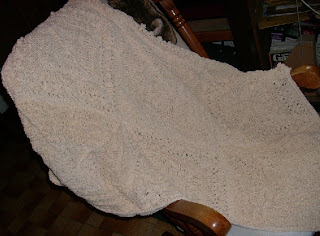 this throw was a present for my parents. it's knitted in squares with 2 different patterns. in rounds from the outside in, so the same cast-on will give the same size without fiddling. the simpler one is knitted in plain knit and purl rows: 6 rounds in k, 1 in purl, 5 rounds in k, 2 in purl etc... on each of the 4 corners I did a 3-into-1 decrease and the square forms automatically. the other square is worked in a similar style, but with lace rows and bobble rows too. all is knitted in cotton chenille, which gives it a soft touch, but still leaves it fully washable. and it even works well with the tussah silk cover I knitted last year - a fact that I had totally forgotten until my mother mentioned it:) who thinks about last years knits? 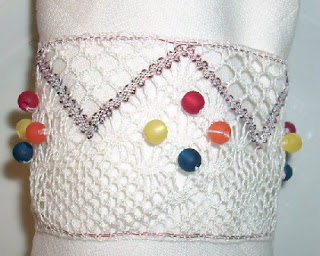 last but not least are the napkin rings in bobbin lace - which were made as an exchange gift for the OLG Christmas Exchange. I had asked beforehand about suitable colours and was told that there is some blue and yellow and orange - and red wine to boot! that left me baffled for a while, because it isn't all that easy to include several colours like that in bobbin lace - the working threads tend to mingle, depending on the pattern, and I didn't have enough time to work several samples to find out what will work. eventually I decided to to a classic white lace (linen), to include beads in all 4 colours and some multicoloured thread (cotton from Oliver Twists), where the dark colour would be lightened by the white threads running through it. on each side one pair of fine wire gives a bit of stability and makes it easy to reshape the rings without having to starch them all the time. I really enjoyed making the rings, even though the time was a bit short in the end. but they arrived in time - and I am going to do more lace again after a few years of hiatus.
so here's the proof that I haven't been idle - but now I am off to enjoy one of the christmas presents - 10 back issues of "wild fibers". and maybe a bit of quiet spinning - for the first birthday present of the coming year! no rest for the wicked - and none for the rest either:))
Posted by Woolly Bits at 04:45

I love the socks. They seem so cosy. These last few days I have been wearing a pair my friend Anne knitted for me and my feet feel so happy in them. I wish I could knit -sigh- .
I like the throw too I bet it is just fabulous. What lucky parents to have such a talented daughter. Bettina do you make all your presents?

The socks are terrific, isn't it wonderful to see the pile of unfinished things become finished? I have just discovered the joy of Wild Fibers... not your normal magazine, but lovely still. I love to spin, and don't seem to have nearly enough time to do so. Is there ever enough time... I think not!

Busy as ever Bettina. I'm anjoying the pictures of all the results.

Kim - yes, I am always glad to finish something that has been around for ages! but on the other hand I need just such a small project in the corner - to grab it when going somewhere, to work on it, when I just finished a larger project etc.! and the pattern for my own sock size is in my head without having to look for it, so this is perfect!
Helen - I don't do all presents myself. sometimes I just don't have the time or it's something someone has been looking for over a long time etc. but usually I do, I'd say 80 % of my presents are handmade... it can be hectic, but I wouldn't keep doing it if I didn't love it, too:)