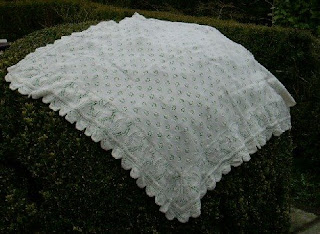 I think we are out of the woods - where snow and ice are concerned. at least I hope so - I have been sowing stuff that doesn't like the cold, so it'll better be warming up soon! temperatures aren't too bad - and even the sun is peeking out today!

I have been busy finishing shawls. the "spring in the woods" is all done up, including blocking. it's a bit smaller than expected due to my fiddle-up with the smaller needles, but it turned out nice 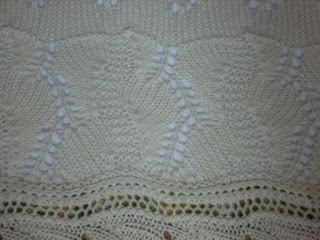 and soft, even though I'll probably end up giving it away. it's too small for me to wear it doubled up and too precious to use as an afghan on the sofa (with dogs and sometimes pig-like DS!).
the "pretty as a peacock" is finished too - I just have to do the blocking! which is giving me a bit of trouble due to the large length of the upper part - longer than two metres means it doesn't fit on any of the beds:(( I'll have to do it in two halves - not ideal, but it can't be helped.... but I already know that I'll keep that one - it's one cosy, fluffy cloud to wrap myself up in!
because I had nothing special to knit close by (desperation as you can im 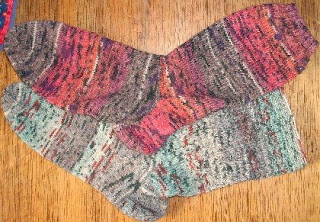 agine?:)) I finished two single socks. not something I'd normally do, but I needed something for a train journey a while ago and didn't want to fiddle about with the heel, so I started another ball. fittingly named, the colour ways are called alaska and ayer's rock (shouldn't that be Uluru now, to be politically correct?). nothing special to talk about, my usual way of knitting. I just doubled up the wool for the small square right underneath the heel - to try to make them last longer in that area! didn't try it out yet, so I don't know if it'll help.... now I just have to do the other socks - or I'll end up wearing two different colours together!
when I did the lace demo at the meeting, I realised how long ago it's been that I have been working bobbin lace - and somehow the bug bit me again. but I have to be tough - I want to finish my celtic spiral collar before I start any larger new project! not such a big job, I just have to find my way around the pattern again. after this I think I'll try my hand at a scarf in silk! or maybe cotton - I tried the "found" sea island cotton on a lace border, but it turned out to be too thick.... but it's nice and soft and might be ideal for a scarf!
we also talked about a new project for our group - we would like to do a book totally out of textiles. each of us will design one page in A 3 - no other restrictions, apart from the obvious one that it can't be too thick or it wouldn't fit into the book later! at first I didn't really have any ideas what to do - but now that I thought about it a bit more, several things come to my mind! a while ago I borrowed a library book about old irish houses and castles.... I do like old brickwork or rather stonework and I'd like to do a tapestry weaving. maybe one of the old round towers? or a ruin with large, irregular stones, covered in lichen? maybe with a bit of green in the background?
another idea I've been contemplating for a while is trying to show the striata and structures found in canyons such as the grand canyon. there was a photo in one of the last "National Geographic" issues that showed fantastic red and rosy tones - and I think madder dyed wools and silks would be perfect for this! at the bottom the dark blue-green river can be seen - I do like this colour combination, topped by a brilliant blue sky! maybe another tapestry? or freeform? or felting? no, felting is just not my thing, but I think I don't have to worry about lack of ideas! rather lack of time - the deadline is the meeting at the end of september!
Posted by Woolly Bits at 06:38

The "book idea" for the group project is a good one - and I like your possibilities so far. Something to aim for!

I love the book idea and also the picture that you have described and the colours are just gorgeous I love indigo and madder particularly the dark indigo's with the terracotta madders . Why not felt? Felt makes wonderful textile books! bw helen

well, I don't know - somehow felting isn't my thing. needlefelting is more suitable for 3-d stuff, even though I have used needle felting for accents on knitfelted items. and wet felting... maybe it's the lack of proper working area? or maybe it's just not my technique. I tend to work a lot with silk and fine wools and wet felting (like pottery) tends to leave my hands really rough. so I have to decide and somehow spinning silk always wins:)) another reason I favour the idea of tapestry weaving is the fact that I already have quite large amounts of dyed wool and silk samples that I could hopefully use in the process! I'll let the ideas "stew" in my mind for a while longer....