praise where praise is due.... 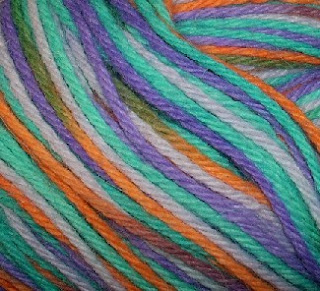 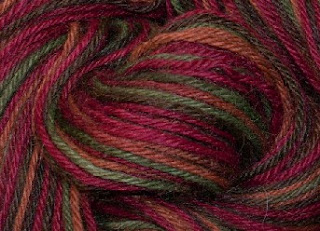 ... or handspun versus commercial yarns

ever since I learned how to spin I became more critical of commercially available knitting yarns. now, I am not saying that everyone who usually buys yarns in the lower price range or poly-yarns (or even cheaper mixes) should consider spinning their own. it does take some time and effort to do! but when compared with the high-priced yarns available (and let's face it, most nicer yarns are quite pricey) I do sometimes wonder if handspun wouldn't result in at least the same if not better quality. e.g. the noro quality of silk garden didn't convince me at all - esp. given the high prices those balls are leaving the shelves for!
so I was a bit reluctant to order some pure alpaca yarns recently - but I just didn't have the time to handspin them. I ordered Artesano hummingbird, in the colourways kingfisher and pheasant, 14 euro per 150 g. and to my delight they turned out absolutely gorgeous! the colours are strong and the yarn is soft and smooth - and I am very tempted not to knit the planned socks out of it - but something less hidden by pants and of course less stressed than socks. I don't know how durable the socks turn out to be, but I have to admit that I most likely won't be able to do a scarf or even larger projects with just the one skein each - so it has to be the socks.... 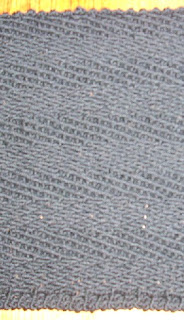 I finished "Henry" - the woven-looking scarf from the last knitty issue. the cast-on was interesting, worked well as did the knitting. not difficult, as long as one checks the front every now and then - miscounting has to be tinked as every mistake is visible from a mile away. I wasn't happy with the tubular bind-off though as it doesn't look at all like the cast-on (as is claimed in the instructions), but more like a narrow, but normal rib! I did and undid it 5 times (quite a job as it isn't just frogged, you have to "unsew" the whole and very long row) - until I left it the best way I could. still not perfect, but the best I could do. 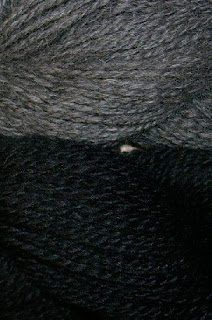 I also spun two of the three natural alpaca colours - the white is still on the bobbin for another day or two. the black was hard to photograph, but it is even nicer than the grey, lustrous and smooth - I'll definitely spin some more of this soon! I was thinking of maybe combining it with black mulberry silk, one single yarn done up as a two-ply. though I'll have to be careful with the knitted project, as the yarn will be quite heavy and probably prone to "hang out" a bit.

I have to be careful not to plan too many new projects for the time after christmas - the spring months are already filling up nicely - with one alpaca sleeveless vest and at least two lace shawls (never mind the small stuff like socks etc. that always comes in between...)

The yarns are lovely, all of them. Actually I didn't start using the cheap commercial yarns until I started weaving. I found they made nice sampler scarves, and it didn't matter if I made any really big mistakes, as I hadn't invested a fortune in them.

I am not a weaver (yet) - maybe that'll come eventually? I heard a lot of people telling me about having problems using their handspuns at first, because they feared to destroy their lovely yarns. for some reason that never mattered to me - I used my very first lumpy-bumpy to tie up flowers in the garden:)) the only cheap yarns I can lay my hands on here, are ghastly knitting yarns, that give of that crunchy sound when touched. I cannot see myself using them for anything really, but it probably depends on the quality available. we'll see what I have to say about this when I am weaving as well:)) I don't mind correcting my opion! though I doubt I'd ever use artesano for weaving - it's just a little bit too pricey for my purse.....