I have been fairly quiet these days - with good reason. it's not that I was lazing around, far from it - I had to finish several projects and (what's new?) I set myself tight deadlines - too tight maybe? so far I managed all of them - just about! only two more to go and I think I might just make it in time! last year, wenn the steering group of the Online Guild dec 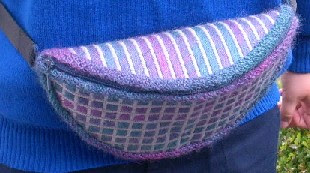 ided to offer a workshop for "spinning for embroidery", I agreed to do a project or two as well. I wanted to do a "textile" bum bag for a while, so I decided on this as my first project. I like the result much more than the plastic thingy I've worn during several holidays - and I enjoyed working on it too. I am also doing an embroidered scarf, handspun and handdyed silk yarns on woollen mousseline, which I am going to introduce on thursday - which concludes my work for this workshop. during the first week we had crewel embroid 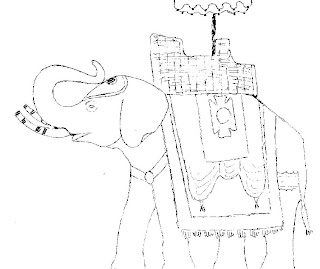 ery and I liked the shown camel in full regalia so much, that I decided to make my own - not a camel, but an elephant, decorated with the usual indian attire for a riding animal. of course I didn't have all that much time yet, but I managed to spin some fine grey-marled alpaca and a mix of one thread of this alpaca and one fine thread of brownish tussah silk, to stitch in a bit more than just grey. of course the real fun with this project is the deco, for which I am going to use some of the leftovers of my silk scarf and some newly dyed fine silk yarns - still to be done. the howdah will be embroidered with thicker tussah silk in natural beige, I hope this will look like a basket material when finished. (Kokiri, my elephant lady, does have feet - and the parasol looks a bit different in the drawing too - but it didn't fit onto the scanner in one go.....)
what totally baffles me is the reaction to this workshop. usually we have lively discussions, plenty of questions and a lot of resonance. this month must be one of the quietest that I have experienced in the group so far. now, either everybody is veeery busy spinning and stitching - or there is hardly anybody interested in this kind of work - I guess it's the latter:(( I don't know why though - I had great fun designing my projects and even more now in following the crewel work. we had a few people writing that they will eventually start something, but I don't set out much hope in seeing finished projects. nothing to be done about it - at least our time wasn't a total waste, as each of us has finished projects to use or to give away!
when I am not working on those projects I am working on DS's new winter sweater, in the strong colour mix I showed earlier. it's easy to knit, very soft and pleasing to touch - and the kg of fibres was done very quickly too. not mashine washable - but what the heck, we don't often have really cold weather and the sweater won't be worn all the time like a fleece.
I am also working on some gadgets that are called "huettenschuh" in german - socks with leather soles underneath. the sock is knitted like any other handknit sock, but in thicker yarn, a 6ply. the soles I bought ready-made, they are suede underneath to give a better grip, have a border sewn around with holes it it to first crochet around and then sew them to the sock. I have some of my own (nice and warm), but Michael wanted some too, so he'll have them as a small (we are not prone to give away new cars, long holidays or expensive jewelry in our family:)) present for our 10th wedding anniversary next week..... which leaves the cushion for his favourite chair in front of the radio and his alpaca dubbelmossa still to be finished - for which he received vouchers a while ago!:)) I better get them finished before the next christmas is looming!
next on my list is the dyeing for the hummingbird challenge, 5 colours, which will be spun and later knitted into a lace shawl with "feathery" patterns. and of course I have to spin more of the grey alpaca, together with black and white - to work on the projects for christmas! I have to dye two colours for the pattern I want to knit, though I am not sure yet which one to choose. two purple/lilac tones or two reds - with white, grey and black. I was thinking of dyeing with just one colour - but put in some white and some of the grey to get two different shades that work well together.
Posted by Woolly Bits at 09:57

I know what you mean about how quiet the embroidery workshop is, I think there's a lot of new ideas for many people (I never thought of spinning / dyeing for embroidery before)it may take a while for people to get started on the projects. I'm sure I will get back to what I have learnt from this workshop when I have more time.

By the way, your huettenschuh are known as "slipper socks". I have a much loved old pair from Afganistan that were handknitted in in a traditional colour pattern. They are wonderful to wear in about the house in winter. A good project for this time of year!

ah yes, Dorothy - slipper socks, thanks! sometimes the right expression just won't come, though I've read about them in english before! I think they're rather comfy, as long as I am inside the house and don't run out all the time = during winter!
and maybe in time there will be some pix with finished embroideries, I hope some will take it up and show us their works! (thanks for the praise for the bag, I am quite proud of it:)