I received two balls of noro silk garden recently - as a present. first impression: the colours of one are nice, the other ones don't work for me - but that's a matter of taste, I guess. what utterly surprised me (in a negative sense!) was the lack of quality in the yarn. I decided to knit both balls up in a hexagon shape until I run out of yarn and use both together for a cushion with two different sides. all well and good, but the yarn is so different in length (both on 50 g of course) that the difference made up several rounds! I had to use some other wool from the stash to fix this. the yarn is unevenly spun, but not in a nice way like some designer yarns - just badly done! it contains loose fuzzy fibres (looks like throwster's waste hasn't been carded in properly), doesn't feel especially nice - and costs a small fortune to boot! now I wonder: did all the raving knitters just buy one lot and went off it afterwards, disappointed like me - or is my taste so "snobbish", that I am one of a handful, who don't like it? maybe the other noro yarns are nicer - but I wouldn't bet on it. conclusion: no expensive "names" for me anymore - I can spin something like that myself!

on the bright side: I took some more pictures of my dyed yarns, here are some of them. I also finished the first sock to go with the baby cardie, but I have to pull in the threads before taking a picture! 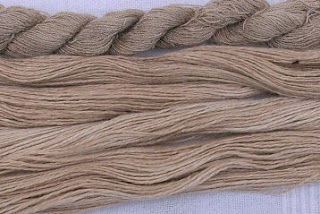 to the right two skeins of silk, dyed with red camellia flowers on alum. the upper is a bought tussah silk, the lower a handspun 2ply singles. the astonishing thing was that the first dye bath on alum mordanted wool was just a yucky beige, not really nice. I then just threw in both of the silk skeins and quite liked the brownish tone I got.


Below (lower picture) some teeswater top, mordanted with alum and dyed with the blue flowers of a bearded iris. I froze them, because they tend to flower in stages.

Below (upper picture) three skeins dyed with delphiniums. the upper mintish green results from dried wild larkspur flowers on silk. the skein in the middle is the bought tussah silk again, the slightly beige tone of the natural silk makes the dye look a bit different, the lower skein is the same on white mulberry silk. both are dyed with the dark blue flowers of a garden variety of delphinium (pacific hybrids). after this results I started to grow some more from seed, so I hope this year I'll be able to dye some more of those blueish-grey tones. the wild larkspur doesn't grow here - but is available dried from some "drug" suppliers by mail order (at least I know from one in germany). 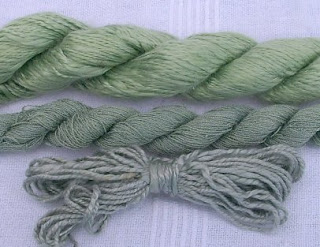 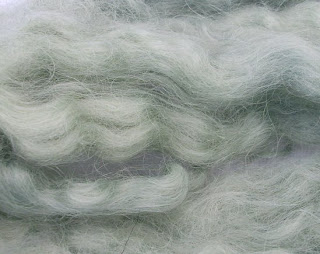 Oh, I really like that palette of soft greens.....!