this day already started grey - and didn't improve! shortly after lunch it started to drizzle, first tiny sprays, but by now it's like a white wall of mist out there... no point in doing anything outside, drizzle is just as wet as rain - it only takes slightly longer to get drenched in it:)
it does look quite autumnal though - it's still too warm for autumn, about 18 deg.C, but often windy and we had a good bit of rain last week. humid - and my potatoes won't like it. I hope they don't "catch" blight - they have a bit of catching up to do, because I was late in planting them. the blue and pink fleshed varieties stay fairly small anyway, but pea-sized spuds are not really a delight to use:)
I did persevere with my boucle practice over the last few days - and eventually managed a yarn that deserves that name! not sure what to use it for yet, but at least it looks like boucle and has a soft hand! and it's all protein fibres, so I can dye it without much ado if I want to.

in the middle is my first try, with linen = potscrubber. on the left the second, a bit better, but not really a boucle, it's too densely coiled. on the right finally a boucle - yay:) I think I'll have to buy new alpaca top to spin an amount that I can actually use for a project.... it's a lot of work - for quite a small amount of yardage! 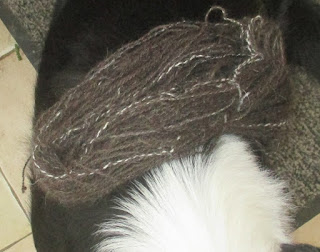 Maisie is loosing her summer coat, she's shedding like mad. I've collected a box full of her undercoat in spring, and together with my "harvest" now I spun a small skein of "chiengora". one wash and the doggy smell is gone, luckily she doesn't have a strong dog odour - yet? in my experience most younger dogs don't have that pong that older dogs can develop... so I'll make the most of it now! this is the second small skein - I think eventually I'll have enough for a hat? oddly enough Maisie is a border collie, black and white - but the yarn is dark brown. very soft though.... 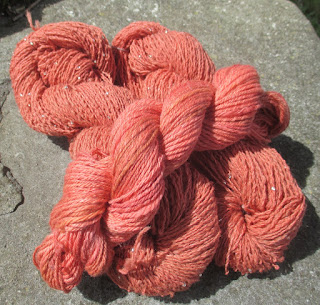 the last bit of spinning were two skeins of a three-ply. I spun two bobbins full of slightly rougher yarn and overplied them together. the last strand is a fine (softer) fibre from the same dyepot - I think a remnant of superwash? anyway, I put some clear, silverlined glass beads on it and plied it again. the skein on top is the leftover soft ply, chain-plied together, because I wanted approx. the same thickness as with the beaded yarn. now what to do with it? and when I chain-plied that last bit I didn't think and spun in the wrong direction! I was nearly done and surprised about the odd look of the yarn, when I realized what I had done - so I had to treadle like mad for double the amount and in the other direction to get a proper yarn:)

when I cycle to town, I pass a small stand of goldenrod, solidago virgaurea... usually the county council mows it around this time, so I try to pick it for dyeing. 200 g of teeswater top on the left are from that dye bath; a "cold" yellow with a slightly greenish tinge. the softer yellows on the right side are dyed with frozen dahlia flowers that I wanted to use up. I didn't have enough of my favourite red pompom dahlias, which give a lovely soft orange, so I mixed whatever I had in my bag plus a few fresh blossoms, which ended up a less strong dyebath, but still nice I think. the brown skein across is more teeswater, but from an older dyebath. as usual I have forgotten the dye plant - but I don't care:) it all goes in the bin for my "persian tile blanket".... now I just have to go down to the bog to pick a bag full of reed flowers - I do need a few nice green tones for that blanket! 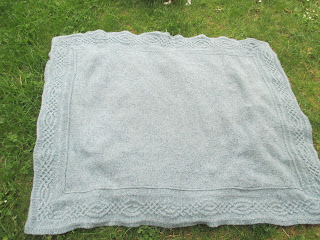 to show that I didn't slack during my blog pause - here is a photo of a blanket I knitted for my mother. it's called stornoway. I used doubled up fine tweed yarn from kilkarra tweed, which fluffs up nicely after washing - perfect for a warm lap blanket! the main part was a bit boring (esp. as I worked on it during summer - not a good idea, too warm underneath:), just a knit and purl pattern, but I loved knitting the attached cable edging! I think I'll make another one for myself soon. I still have a small cone of this colour and another one of a darker petrol tone, which should go together nicely. 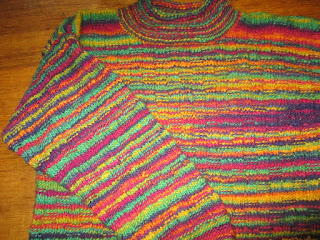 this is an old sweater I made for my son many years back, which I dug out of my stash! I know, it's colourful.... I wouldn't have chosen that colourway myself, but he was a small kid and wanted this one - so I spun and knitted it for him. he was quite happy with it - until he wore it to school one day. normally they wear uniforms here, but they needed to repair the heating, so the kids were told to wear something warm that they like. he came back utterly crushed:( several kids told him that he looks stupid and that they don't like that sweater. he never wore it again, which made me so angry! not because of the work I put in but because he was made so unhappy and insecure that he never wore this again - and has pretty much been wearing dark, muted colours ever since:( I think I will frog the whole thing and make something else with it - a bag maybe? knitted and felted it should be strong enough - and if someone has a problem with me using it as a bag - they can stuff it! luckily at my age I have the luxury of not giving a hoot what other people think about my taste:) 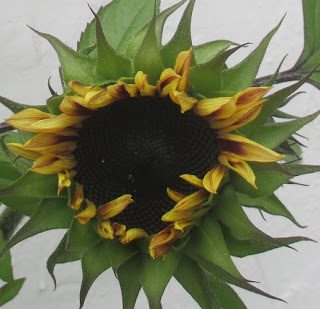 and to finish it off - here is a picture of one of two sunflowers the slugs haven't managed to finish off in the early stages! it's about 2.20 m high and has three flower buds on top - this big one and two smaller ones behind it! the downside is that I have to stake every sunflower here, because otherwise the wind will just snap them right off:( but I am hoping that the seeds will attract some finches again like last year, where we had a whole group of them partying on several big seed heads for days:)

Oh, what a meaty post! I love to see what you have been up to lately! The yarns are beautiful-you did a great job on the Boucle-I've read others say it is a lot of work-nice to see your progress, too.
The blanket is amazing!!!! What a superb gift for you Mom! No wonder you will be knitting another one for yourself!
I get it about the sweater-peer pressure at its worst-sorry for that!
The natural dyeing has incredible results-you have a great eye for color and put your talents to good use! Stay dry!!!

I tripped over you at Leigh's of http://www.5acresandadream.com/?m=1

Enjoyed this visit will come again 😊

Cindy - I already wound the blanket yarns into balls - I use it doubled up, because it's too fine otherwise... and with ballwinder balls I can use the same one from inside and out! now I just have to decide which colour for the middle, which for the cabled edge:)we're down to 12 deg C, so I larger knitting on my knees will actually be quite cozy:) no idea what I'll do with the madder dyed beaded yarn though - def. not scarf/next to skin quality!

Goatldi - thanks for your comment and I hope you will visit again:)

You're blogging again! How did I miss this! Well, I know how I missed it; I'm swamped with things to do here. Little time for the internet!

Blogger has made a lot of changes lately, hopefully they're for the better but they have taken some getting used too.

Love your yarns and projects, especially the boucle. As usual, you are one productive lady!

Leigh - yes, I finally got around to it again:) but you're busy all the time anyway, there's only so much you can do in a day! and critters and food come before internet or other non-essentials.
I still haven'd figured out all the blogger changes, some things work, some don't (at least not for me:)... but never mind, by the time I get used to everything, they probably change stuff around again! and the boucle is fun - but it does take a lot of time to get a reasonable amount of yarn. it's like these wrapped yarns: they look fancy - but it takes tons of materials and time to get anywhere... no surprise that people, who sell handspun usually offer singles:)