I was up early today - brilliant sunshine outside, even though everything was covered in hoarfrost. but after many grey days sunshine always gives me an instant boost, so I started to sort out a corner in the shed... where I discovered a large plastic box. I thought it was only a few bags of unspun fibres in there - but no, it wasn't ! out came this lot: 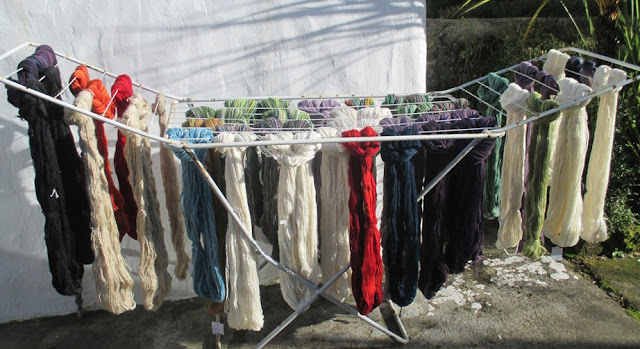 ehm, yes, I had totally forgotten about all those yarns! most of them handspun, some handdyed commercial sock yarns... how on earth could I forgot them? I think I should knit more and spin less - at least for a while! I put them out to get rid of the moth ball smell - and now I have to think hard about what to do with them. a lot of the purple ones are from a cochineal dye session some years back. the white stuff is half wool, half silk, plied with a fine commercial silk. the black on the left is pure alpaca, some naturally "honey" mohair etc.. I blame DH, because the studio isn't finished yet - and I have to spread out all my materials:) 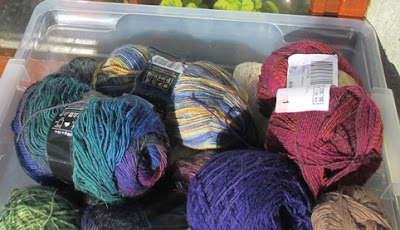 I also found some commercial and hand dyed sock yarns in balls - and I thought I had sorted through the lot and put everything in one box. apparently not... I was desperate for some lighter green, when I did the spring wreath - found it now, just a little bit too late:( 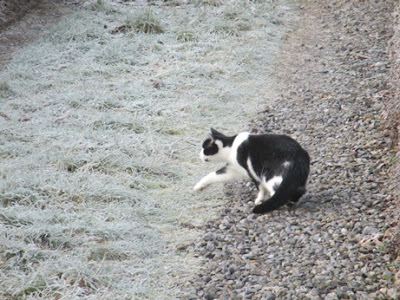 to change the topic - Mr Pringles wasn't too sure about that odd white stuff on the grass! you could see his doubts already, when he ran across the gravel - which normally crunches and moves, but was frozen tight this morning! so he veeeery carefully checked out this odd grass, one foot at a time - and when he noticed that it's somehow still wet, but also "crunchy" he did a mad dash across the road and up the wall on the other side:) I think cats are absolutely hilarious, when they try to avoid cold or wet feet!
Posted by Woolly Bits at 06:44

Too funny! I dream about finding a good stash like that! The kitty is so cute-even ours run in to hide from the chilly freezes!

Cindy - I should have known about those skeins - I do keep notes about my handspun and all of those skeins were in my notebook!! no point writing it all down - if I never look at my notes:)
today is not kitty-weather at all: I opened the door for the cat, but with heavy rain and strong gusts - pringles decided to go back to bed:)

That is a wonderful find! Think of all the fun you can have with all that newly discovered yarn.

Nina - I will, yes - only, now I have even more things on my to-do list:) could be worse though - imagine looking for a yarn, only to find out that it's gone! I do think that I should spin more project orientated though - none of those yarns were made with a project in mind - maybe that's why they stayed hidden for so long?

Hi Bettina - what a find! Love your cat too. Janet in Seattle, still knitting and crocheting despite arthritic hands.

Janet - thanks for your comment! yes, I still have the newly aired bounty sitting in my room - thinking about the projects I could do with them... decisions, decisions:)