that's what we're having today. though I have to admit that this year they are few and far between. the last two summers where really yucky, but this year is much improved. ok, I thought that 30 deg. C was a bit much, but that only lasted about 2 weeks - since then it has cooled down quite a bit, we've had some rain, but not many days have been totally wet and grey! the forecast isn't too bad either, but that can change quite quickly here! we've had forecasts of a lovely azores high - and all we got were grey, muggy and sticky days instead:)
enough of the weather - I've finally emptied the box of the pre-soaked dyestuff. high time - I discovered a bit of mould on a piece of silk top, which I had to discard. alum mordanted fibres can stay damp for quite some time before mould develops, but because I used acid dyes I only soaked in water/vinegar mix! so I did a dye marathon and this is the result: 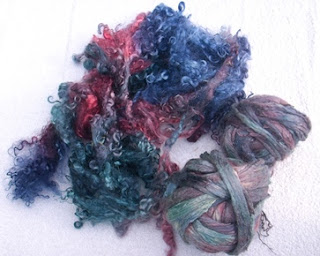 first I used up some of the gaywool dyes I had left over in jars - they don't last forever once dissolved! I just spread out some silk noil (photo below) and some kid mohair locks in my roasting tin (esp. for dyeing). because there was still some space I also added some soysilk top. I filled up with water and added the liquid dyes on top. everthing was covered and stayed in a hot oven for about 35 or 40 mins. the dye take-up is very nice on the mohair locks, more muted on the soy silk (no surprise, because it is apricot coloured anyway in its natural state)... 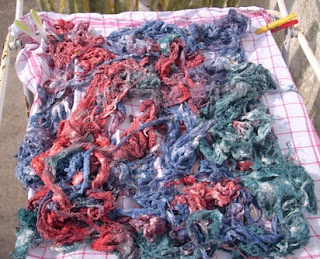 the silk noil however didn't take it all that well - probably the disorganized mess was pressed together in some spaces from getting rid of access water before dyeing. on the other hand I am not too fussed about that because I have to card it all anyway before spinning it. it'll blend together, with some areas more pastel coloured than others, no problem. the only difficulty was drying it properly, because I couldn't hang the mess up! as messy as it looks right now - once it's carded it spins up into a nice yarn, uneven, a bit like terry - but with lots of structure and a nice, slightly grainy grip. 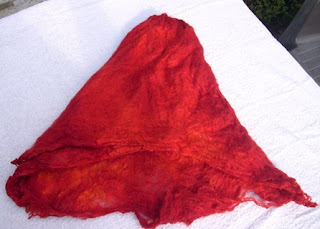 I also dyed this silk cap - in a very fiery red, which will be used as ply for the red/yellow merino top from my last entry. in fact both are spun up - and I am going to ply later tonight (probably I won't have enough of the red, so I'll ply some of the merino with itself). not a yarn for shrinking violets:) the dyeing was done in a microwave bag: I poured in some yellow at the bottom, added the damp silk cap and poured in some red. because the bag had to lie flat, the red overdyed the yellow nearly everywhere, but that's ok. adds a bit of zing:)

this is the second sock blank I knitted. I decided to use some of the food dyes - just slightly diluted - to paint a rainbow. well, ok, I didn't paint it so much, I poured it. that's why the stripes are so uneven:) but I think the socks will look nice, when knitted up! because this is only a bit more than half of a skein, I'll have to add another colour for ribs, heels and toes - I am going to raid my stash for that. when the yarn is wound into a ball, it looks far less "offensive"! 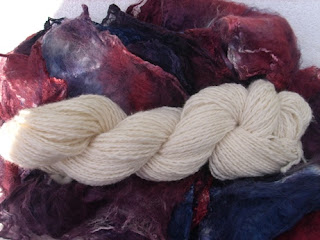 then I dyed all of my hankies - in shades of purple to aubergine to nearly black. I love spinning them up, but I also wanted to try to knit with the drafted hankies - as soon as my gardening hands are a bit less rough:) spinning silk isn't really fun, when all the fine fibres stick to your hands.....
and no, I didn't dye white - this is a skein of cashmere/himalaya fibres, which I spun using the long draw - so soft and cushy! I don't know what this will be, but I'll have to spin up another 3/4 of a pound anyway:) 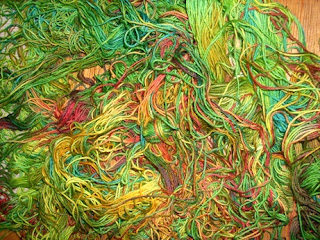 this is what happens when you don't check your sock skeins! I saw that the skein was only tied in one place after I soaked it - and I thought: ok, I'll just have to be careful. if I hadn't been too lazy to retie - I'd have saved myself about 4 hours of clearing out this mess:( because of course the one and only tie did split! anyway, I have a nice parakeet coloured skein now, so the work was worth it after all. 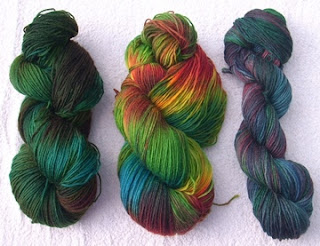 more sock yarn: less bright colours on the left, the "brother" of the parakeet yarn above - and a small skein of sock wool with silk (which I like best, but of course I only have 50 g:(). 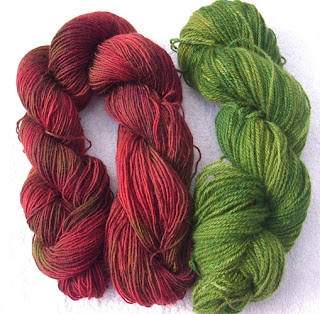 another odd skein - it was wound into a very long and narrow skein! dyeing was no problem, I just have to be careful, when I wind it into a ball - to avoid something like the mess above:)
the green yarn on the right is a skein of handspun, I think merino, but I am not sure. I added some yellow and blue spots before I put the skein into the green dye bath - and I do like the uneven green, though I haven't got any plans for it - yet. the green is very luminous - I wish I had a bit more of that. 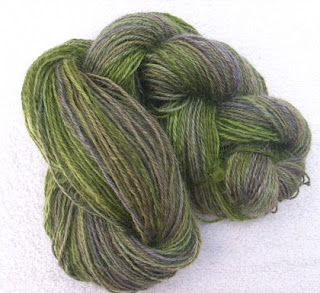 I also spun some of the dyed fibres from the last post - this is the "moody jungle" teeswater. the original is less grey, greener in colour, but I like it very much. the question is what to use it for - maybe I'll use it for weaving squares with my weavette? it's a chain-plied 3 ply anyway. 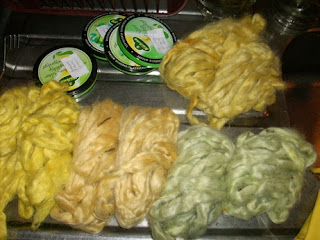 as I said, the heatwave is long gone - and of course my "solar" dyeing couldn't stand outside forever (in fact I discovered small mouldy areas in one of the jars!), so I brought them all inside and helped it along by standing the jars in a pot full of water for an hour or so. mind you, no strong boiling, just so that the jars get a bit more heat. the colours are all very different. meadowsweet flowers are the main ingredient in the strong, bright yellow on the left. the more golden tone in the middle is down to dahlias and crocosmia flowers and the green on the right came from dark red and dark blue aquilegia blossoms. the "in between" yellow above has a slightly green tinge here and there from tansy, but the dyer's chamomile has given the main colour, I'd say. I have 200 g of each of the colours, but I think I might overdye some of the yellows, because I still have yellow tones of teeswater in my stash - and there's only so much of it I can use! greens however... are a different matter:)
so now my box of dyeing utensils can go into storage again for a while. the problem with all those fibres/yarns is that I want to try pretty much all of them at once. I finished the first sock with the "moody jungle" silk sockwool, but now I want to start one of the other yarns. starteritis - I can see a lot of 2nd socks coming up during winter:) I also started the Argenteuil stole yesterday. because I have much more yarn than given in the pattern, I added a few stitches. I think I have about 320 or thereabouts - quite a long row, but the lace pattern only runs over 4 rows and is easily memorized, so it'll be the perfect tv project. off to a mug of tea and some more knitting....
Posted by Woolly Bits at 11:37

What wonderful dyeing!! I love the sock yarn skeins :-) It looks like you had a lot of fun.

Ho..ho... I see a pattern developing resulting from the 'lazyness' of tying a loose hang together.... ahem... remembering the... what was it again? you dyed in the washing machine and came out in a tangled mess and took aaaages to wind up? ;-)
Anyway, you were a busy bee. I love the parakeet hank, it's just up my street. The green merino handspun with the flecks of yellow in I really like, too... but then I'm very partial to green at the moment.

Judy - thanks, and yes, it was fun. though I wouldn't want to hog the kitchen like that every day - nothing else got done....

K - ehm, yes, I had a problem like this before:) though the purple mess was tied properly! and still tangled up... the worst is that I couldn't bring myself to do any more of the 5 skeins - yet... the parakeet was no problem in contrast, easy to pull apart and then just over and under without knots:)
I am looking forward to knitting with the parakeet colours - easy to see even on dark winter days:) or maybe on certain bus trips?....

Incredible array of color! You have been busy! I like the parakeet green and the sock blank-the colors call be to knit! You will have quite a stash this winter-how nice. I laughed at the skein explosion-we have all done it!

What beautiful colours... all of them. I'm going to have to get myself a stash of acid dyes to get some colours like that in my stash.
I totally understand about the single tie. I am sometimes tempted not put all the ties on as well, but I've had the same experience with the single tie failing and that just isn't fun.

Cindy - yes, my hands are itching for the parakeet colours, too! don't think that stash will last until winter though:)

Nina - I admit that I am not a purist about dyeing. I wouldn't use really poisonous stuff like chrome etc. for natural dyeing, but I do like blues, purples and greens, which are not so easy with natural dyes. so I use natural where I can - but acid dyes for the rest:) and they can be used together!
the lesson from the single tie will last - for a few months, before I start to "forget" my good intentions on that matter:)