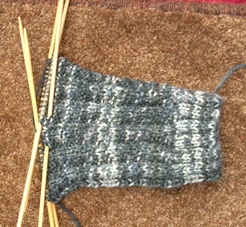 it works again! I can upload directly from my files, which is a great relief, as it only takes seconds to do... I hope it stays that way! was that just a hiccup - or did somebody at blogger actually listen to my complaint?:)
I have to finish some more gift projects before I can start my next bigger project (but I know which one it's going to be - have a look at this: Fia). I might just start a small sample to check out how it looks, but I can't start it yet, because I have to finish these socks, among other things. I've bought two balls of 6ply sock yarn, which I've never used before. I had to check out the difference in stitches, but it knits up nicely - and faster than 4ply:) which is good, because I have to hurry up a bit..... the colours are nothing to write home about, but you know - men and sock colours..... 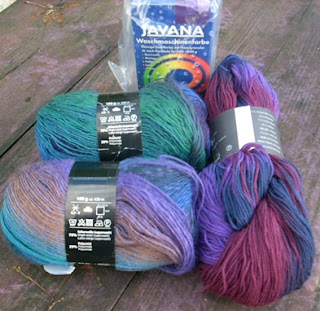 I also took the chance to get my hands on more "normal" (aka 4ply) sock wool in lovely colours, when I was asked if I "needed" something from wollknoll in germany. what a question:) the two balls on the left are singles with a lovely blend of colours (stronger in reality). I tried the yarn before, it knits up nicely, though it has a very slight tendency to bias. works well with some patterns though! the hank on the left is a 4ply, can't go wrong with a bit of purple....the dye behind is purple, too - for dyeing in the machine. I have some terry fabric in white, that I'd like to dye with this. 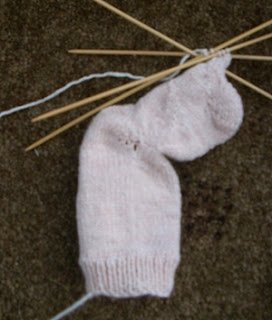 and this is my second project on the needles (apart from some stuff I am spinning of course). it's done with dpn 2mm and silk blend sock yarn. it started to look like a small sock. then a heel.... and then what? no, I didn't make a mistake - it won't be a sock! the skin colour might be a hint.... and I can tell you that the very narrow bit on the needles - is a neck! no more clues - but all will be revealed in time:) it's a bit fiddly, but at least the 24 pages of instructions are very detailed and knit up pretty fast!
I am also getting together my seed orders and gardening stuff. it's february very soon - and this means that over here at least the gardening season won't be far away! plenty of stuff already peaking out, even though we had miserable, monsoon like weather the last few days. but I can see the first fat crocus buds and the daffodil leaves are nearly full size! my tulips from last year are halfway out - only the freshly planted bulbs need a bit more time to show. it's time - I don't want winter anymore and hope for a nice spring this year (seems to be all we're  getting now, the summers are so ugly that they don't qualify for that name anymore....)
I also had plans to show you a few of the books that made it onto my shelves over christmas, but I think I'll push it into the next entry....
Posted by Woolly Bits at 08:41

It would be lovely to see crocus, daffodils and tulips, even just a bit of green! We've gone from below normal weather where we had highs of -13 or more, with nasty, bitter windchill on top of that, to today's mild temperatures and pouring rain. That's an anomaly. It should be cold and snowy, which is coming back tomorrow.
I do love the colours of your sock yarns. You're right, it never hurts to have a bit of purple!

Glad Blogger is behaving for you finally-I went through that a few months ago. I can't guess what the sock/ creature is...will stay tuned.
The new yarns are beautiful! Nice to have it, isn't it?! The sock looks like a good knit even if the color is mild, the yarn looks very inviting!

Nina - our weather is just as odd, but mainly during summer! spring does arrive earlier here, and I hope I don't have to wait much longer:) and I love purple, down to the socks, even though they're mostly hidden!

Cindy - all will be revealed with the sock creature:) and yes, I do like to have some sock yarns in my stash, though I have to admit that "some" might not cut it:)

It is a relief to have Blogger behaving! I love those sock yarns.