I finally dug out my carbon fibre "sticks" to do some blocking. yes, I know, it's necessary, I just don't like doing it all that much. it wasn't so bad for the Kringel shawl, I folded it in half and it fit the jigsaw mats nicely. 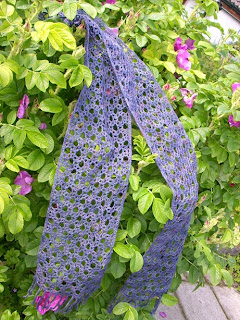 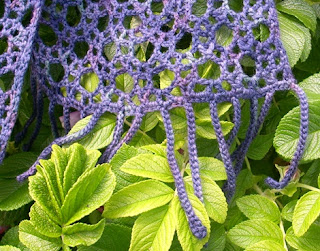 as I said I changed the fringe slightly. in the original pattern they are added one by one, which means that you have to sew in lots of threads. I didn't fancy that, so I worked them all in a row, just chain stitches and working back along those with slip stitches. they don't look quite as airy and light as the original ones, but this way I saved all the sewing in:)  maybe I should skip more than 7 stitches next time though, the little circle at the end of the fringe is barely visible.... 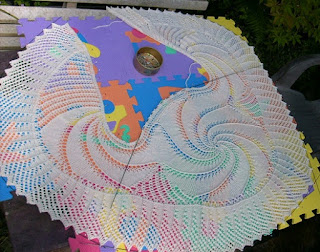 the "in the pink" however wasn't as accomodating as the Kringel! whatever I tried, I couldn't fit the whole shawl onto my mats in one go. eventually I decided to work from the middle to one wing, block that - and do the other wing separately. the good thing about the CF sticks is that they keep the round shape, even if they are only pinned down here and there. you can jump across a short bit without mat, no problem. I do like the very original shape a lot - so much so, that I am going to make another one at some stage. it's too small for me though, so I plan on making one much larger than this. 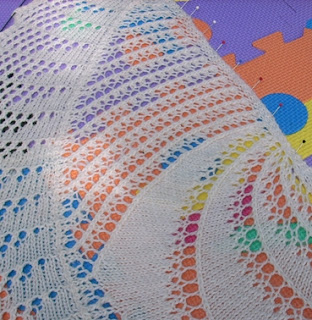 shouldn't be that much of a problem. first I'll enlarge the circle and then I can work the wings from there. I esp. like the feather-like looking side parts and the wide bottom border. which of course could be used on many other designs. all in all I have to say that the shawl is far easier to knit than it looks at first - as a matter of fact the blocking was the most fiddly bit of all:) thanks to the designer for such a nice pattern! 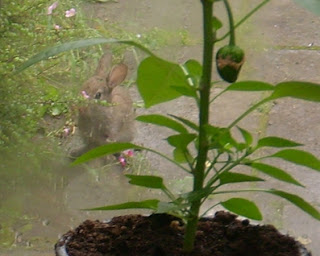 this here shows a little visitor we had yesterday... during one of the (very short!) breaks in the rain a little rabbit came in by the front gate and started to explore the garden in front of the porch (where my chilli peppers are starting to set fruit). it nibbled here and there, until it found some nice daisies - which it beheaded mercilessly:) he (or she?) must be a flower-power rabbit - because today I saw that it had actually eaten all the nice dark purple viola flowers as well (see header pic)! now, I do find rabbits cute, but I don't want them to eat all the pretty flowers in here! but then I'd say it was only a short visit - having Dobby, the rabbit-eating (in her dreams, they are much too fast for her:) dog monster following you can't be such a nice feeling.... I left her out all day today to keep patrolling the entrance - and anywhere else in the garden - and hope that mr or miss rabbit won't come back any time soon! this is the odd thing I mentioned - at first I was stymied about the sudden disappearance of my pretty viola flowers in the stone trough... 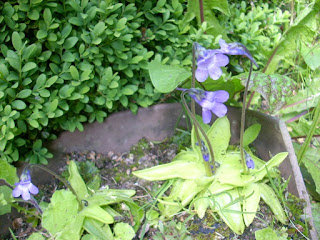 this is another newcomer in my garden. we have loads of interesting plants down in the bog and because there were literally 1000s of them, I transplanted a pinguicula into a pot up here. they don't look like much most of the year, but the blue flowers are very pretty, I think. but there is far more to it than being pretty. they are actually a carnivorous variety! unlike sundew they don't have petals or leaves that trap insects through movement. they excrete a sticky substance on their leaves, which makes small flies and insects stick to them.... as they grow on very poor soil they can improve their nourishment with this. I find carnivorous plants fascinating - must be the morbid side inside me:)

Amazing knitting you have going on!!! The scarf is beautiful and the shawl is brilliant. Nice. I love to see bunnies but they are not polite guests in the garden!

The In the Pink shawl is gorgeous! This year we fenced one of the vegetable gardens. Not only do the chickens cause a bit of havoc in the garden, but our resident bunny was eating everything he could. Last year he ate half the newly sprouted beans, all the beets and most of the kolrabi. This year, it's all growing beautifully although I'm sure he's working a bit harder for his meals.

Well, Blogger is not showing me all the pictures! I love the chain stitch fringe though; brilliant! Certainly quicker than twisting. Love the in the pink too. Interesting shape, I'm guessing it stays put better than an old fashioned triangle?

That scarf is wonderful! I love the design of it and how open it is. The scarf makes me realize you are a very patient knitter as that looks rather complicated! I bet a bunny could eat quite a bit of your garden.
Have a great week,
Judy

Cindy - I agree, I like them - but not in my garden:) they have plenty of space in the fields around here....

Nina - yes, I know, so far we've been lucky with the damage to the veggie plot! I think the dog "patrols" are keeping them away. not sure chicken would be too impressed about that:)

Leigh - yes, the "wings" make the shawl stay without closure or holding it tight. a bit too small for my liking though - I just have to make another one and adjust the size!

Judy - with me it's never in the knitting or crochet, I just need the patience to block everything. has to be done though, so every once in a while I give myself a good kicking and get going, usually with several projects at once....

I enjoyed your blog! You do such beautiful work!

I like the cute little rabbits too but they will eat all your flowers!