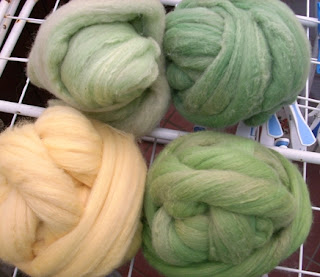 I finally managed to dye all I need for the "real"picture socks. I already have some darker greens and a dark blue-green. but I needed something lighter as well. for this I tried a natural dye extract made from alfalfa, which I received from Ulrike. she has a lot of those extracts on offer here. it makes dyeing very easy; I just dissolved the powder in some warm water, added it to my dyepot full of water at about 50 deg. C, added the fibres and waited for about 30 min. the darker green on the upper right is the first batch, on the left you see where I used up the leftover. the bottom right went into the first bath as well, but before I turned it into green - it was yellow, like the ball on the left, which was dyed with tops of flowering gorse. I usually have more lemony results from that dye, but I think that was my own fault, because it was more lemon coloured after 1 hour in the dye pot. and turned a softer yellow over night in the pot! it gives the green a nice tinge, to add a bit more variety to the finished yarn. 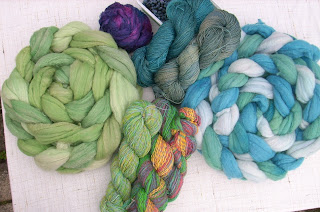 I'll also need some blues for the sky part in my socks. I tried to use some instant indigo for that, but I think it had already oxidised (or I made a mistake while dyeing!). it only gave a very light blue, in the plait on the right. I didn't want to spend more time on setting up vats, so I used "indigo solution", which I still had in my stash. this resulted in the strong, slightly turquoise blue, which of course I have to blend to get anything remotely looking like sky:) - and the more green tone (also on the right). I also put a skein of sock wool into each dip. I had dyed them with ivy berries, but didn't like the results I had this time. I think they improved a lot in the blue dyebath! the purple/pink small ball is silk, which I dyed pink with cochenille last year. it also went into the blue pot. I spun some of the pink into a fine two-ply for the crocheted fuchsia flower, but I still needed the blue-purple tone for the corolla.
the two skeins in the middle are part of my easter egg leftovers. I toned down the rainbow a bit by plying it with a denim blue fine cotton thread. the green-yellow was plied with a light lilac - and the rest was done yesterday evening, but there was no proper light to take a photo of that. anyway, I used some more of the fine cotton, which I had dyed last year to use for the stacking toy. I have no idea what to use the skeins for, but they'll go into the stash for now - and we'll see.

of course it's gardening time, too - which means I have to plant some of the new stuff I bought! I planted 20 albion strawberries yesterday, but after that we had "showers on a string" - the other batch of symphony has to wait until it dries up again.
I also bought some new plants, 2 goji berries and 2 honeyberries (lonicera edulis): 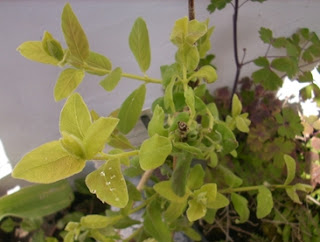 I hope they'll like the climate, because the berries are supposed to be tasty and plentiful. and we bought a new kiwi, self-fertile according to the label! can that be trusted? it's always a problem when plants are dioecious - and apparently nurseries don't know about that (or don't care?). very often they offer the species, but only one of the sexes, which means that nothing much happens on the berry front. doesn't matter if it's juniper, seabuckthorn or kiwis - we've tried them all and always had to resort to specialist nurseries to get results. we'll see about the two newcomers so. but on the other hand my 4 blueberries in pots are doing great - full of flowers and the bees and bumble-bees are having a feast - at least if the humming and buzzing is anything to go by! most of the apple trees are bursting into flower as well - and I hope that the cold snap is going to end soon, so that the flowers produce nicely.... is there a more exciting time in the garden than spring? full of promise and something new to discover every day!
﻿
Posted by Woolly Bits at 06:17

Excellent haul on the newly dyed fiber-just so pretty! The strawberries sound wonderful...and hopefully the kiwi will have a big yield!!! Are they good for a dyeing medium?!

Cindy - thanks, I just lack ideas for them right now:) but I am sure I'll use them for something eventually; they feel quite soft to the skin! not sure about the dye qualities of kiwis! probably not green though:)

Alfalfa huh? Hmm. Beautiful shades of green. Your new plants are on my list too! We have such different climates though, I wonder how they'd do down here.

Your dye colours are wonderful! The huge range of colours is very inspiring. It makes me want to play with dyes too. I've heard of the self pollinating Kiwis, but usually they have to be ordered from specialty seed companies rather than purchased from nurseries. I think that is due to our harsher climate. I'd like an apricot tree if I could. This year I'm after a few new raspberry canes, another blueberry bush and another blackberry plant. They won't be in the garden centres for another month though, as it is still too cold,with frosts here.

What lovely soft colors you've created! And your berries sound great. I need to plant some strawberries too, but it just needs to stop raining for a few days.
Enjoy your weekend,
Judy

Leigh - yes, I was keen on trying esp. the green. it's easy enough to find plants for yellows, but reds/greens and blues are not as easy to find! I still have to try out painting on yarns/fibres with them though...
don't know how the honey and gojiberries would fare in your summer warmth, but at least both are frost hardy!

Nina - I didn't know that you can get seeds for self-fertile kiwis! might be worth a try? the gojis were difficult from seeds. I bought the berries from a wholefood shop, they germinated in masses - and then died off just as quickly as soon as I pricked them out:( which seems to be a common enough problem... not sure about the apricot though - they need warmth and our summers are just not good enough for them. and they flower early - when it's still cold here...

Judy - don't I know it, I need to get the rest of my strawbs into the soil pronto, but it's been one shower after the next:( good luck with yours - and thanks for the good wishes:)