"pickings" of all kinds

after the storm we had a few days back I checked the garden for any damage. nothing major happened here, though the ash trees dropped quite a lot of dead twigs and branches again. nothing unusual in that, we collect them regularly for firewood. but I also found that a lot of larger lichen tufts had blown off the trees. I try not to damage any on purpose because they grow so slowly, but when they blow down, they just rot away. and if we burn the twigs they grew on, I might just as well collect them - for dyeing. the tree lichen over here don't dye fabulous purples or pinks, but they do give nice light to medium brown tones. and the wool has a very special scent afterwards - a bit like a nice smelling medicine:) 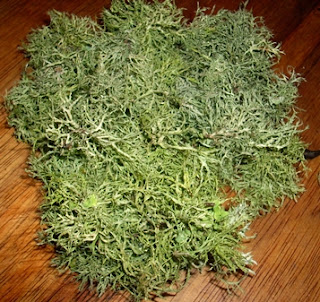 I managed to collect two handfuls of them, which weighs practically nothing when dry. I need to be patient with those - and collect a good bit more during the coming year. I won't be able to dye a huge lot of wool with this, but it should be enough for maybe 2 or 3 skeins of sock yarn - eventually!
of course spring will bring a few other dyer's delights - one of them just starts to flower (see header pic). fresh gorse flowers give a lovely  lemon yellow - but I need to wait until the shrubs are in full bloom. this makes them far easier to pick, because I just pick around the tip - and not in between the vicious spines that leave my fingers bloody - and tingling for days! another rule for gorse picking: don't choose a windy day:) 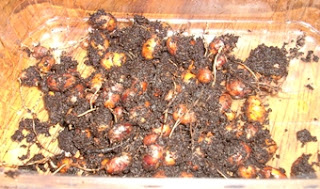 I also discovered that the pot with the cyperus esculentus "grass" had finally dried out in the tunnel. time to shake off the soil and pick the tiny brown tubers. somehow they always remind me of small brown animals....they are edible and taste nut-like, though they don't like our climate all that much and I have to grow them in pots. the leaves are rather unpromising - like coarse grass - and they don't like frost! which isn't a problem this winter, but killed nearly all my plants and tubers last winter:( 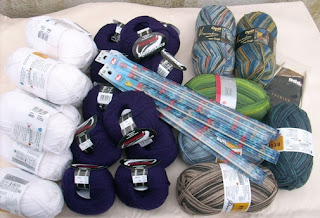 these are pickings of a different kind:) the white balls are sock yarn with silk. the dark purple is fine lace merino, which was on special offer - which I'd like to knit into a sleeveless lacy vest for myself. the two upper balls are sock yarn from opal - in van gogh colourways, which I like a lot. I also ordered a few more tunesian crochet hooks - can use them myself, but people might also try them out for themselves during my demo about tunesian crochet at the end of march....
our textile group project for this year is our very own exhibition in the "Museum of Country Life" in Castlebar. the exhibition will be in late summer/autumn, but we have to have everything finished by the end of may! the group has chosen the topic of "textile techniques past and present" (or something along that line:)) and we are trying to connect our modern projects to the exhibits of times gone by shown in the museum. I would like to take up the very old technique of sock knitting - and modernize it by chosing a special design with special materials. I will work the final project from handdyed (and most likely handspun) yarns, but I want to try out how my idea works with more readily available materials. I did already dye reds, pinks and rosy shades last summer, but didn't have the time to do greens and blues. 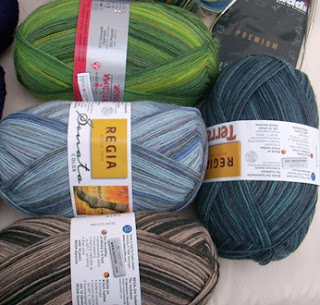 I also bought a darker shade - for a night sky maybe, and some grey/browns for walls or buildings. my plan so far is to design either a rose garden with an old wall/gate - or a garden  and a round tower (typical for ireland and one stands in the vicinity of the museum) in the background. or maybe I should do part of the museum itself? the modern building stands inside an old park and also contains the original old buildings... I just have to make sure to use very fine yarn for the final project to get enough detail into a normal sized sock:) the problem now is to decide what exactly to make. luckily socks are knitted up quite quickly - I think with a larger project I'd need years to finish everything.... 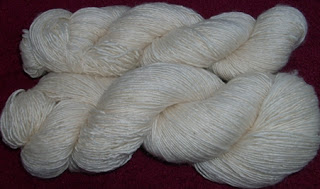 I also agreed to knit a lace shawl for an exchange. the shawl will be "in the pink" - which is perfect, because I had planned to knit that pattern, but don't really want it for myself to wear. the construction looks fun, even though all the instructions are written and not charted. normally I'd prefer charts, but I have to admit that with a pattern like this one charting it would take ages, and one cannot really ask a designer to do that, esp. when the pattern is given as a freebie... I spun a very fine pencil roving made from 70 % wool and 30 % silk. three skeins so far, but there's more if I don't have enough. the recipient Uli will paint it with the natural dye extracts she also offers for sale here.....
of course I am also still sewing away on the quilt - so I'd better get back to that one now!
Posted by Woolly Bits at 06:12

I have never seen gorse so very interesting to see it! You will have some good sources for your natural dyeing soon. The yarns haul is delightful-will watch for socks from this stash! The pattern for the shawl caught my eye-will be interested in your review of that knitting.

Cindy - gorse is one of my favourite dye materials, because it gives such lovely yellows! of course it would be even better if it didn't have those huge prickly thorns:))
and the "in the pink" shawl - I am looking forward to knitting a slightly "toothier" pattern; from the drawings on ravelry it looks as if it needs a bit of concentration! ah, what the heck, it's all only k and p and yo's:))

The gorse is such a pretty plant. Good to know about it's yellow dye properties should I ever run across one. Lots of plants give yellow, but really nice yellows are harder to find.
Love the new sock yarn projects. The colours you have are gorgeous. The shawl yarn sounds yummy - hand painted too? It will be a lovely finished project.

Congratulations on the museum exhibit! That's exciting. I know you all will make it immensely interesting. I wasn't familiar with gorse, but it's a beautiful plant! I agree with you about the lichens. May as well collect them as have them go to waste.