back home and itching to go....

.. we are back from Germany - well, actually we've been back for the last week, but you know how it goes, when you come back from a trip: unpacking, washing, ironing - getting sorted again....
we had fabulous weather, more like summer than spring, temps in the mid to high twenties (Celsius that is:)), bone dry for nearly two weeks. on the day we left it started to rain in the morning, but when we stepped off the plane in Dublin the sun was shining again! it's been windy and rainy for the last few days though - the garden looks more like a jungle by the minute! not to mention the weeds that creep out of every corner...
now that I handed over the patchwork quilt, I can show you a photo of it. it's a memory quilt with photos, surely not a masterpiece, but I didn't have that much time and did the sewing by hand (I still prefer that method, it's just so much more portable than with a machine!). there should really be more quilting on it, but again, lack of time made me choose the simplest option:)) anyway, the recipients seemed to be quite happy with it - and so am I. I haven't done much patchwork for the last few years and I do lack practice! 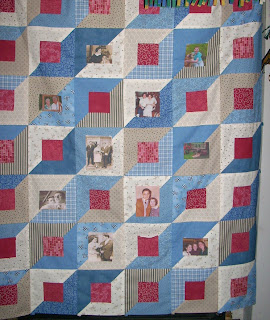 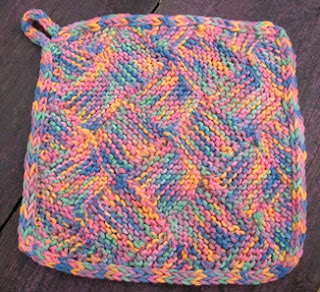 of course I took some knitting on the trip, but I didn't have enough time to work on the sock I started. and it was really quite warm over there, so I only managed to use up about 3 balls of wool for the grey Harry Potter sweater for DS. by now I have finished the back, started on the front, but I really fancied trying out the multi-coloured cotton I bought some time back. I had planned to use it on a garterlac dishcloth (thanks Cindy, for the tip:)) - but when I had finished the first square I decided that it would do just as nicely as a potholder, so I added an i-cord with loop - and started on the second one right after this. it's nice and soft and squishy and would make a nice summer tee as well - though maybe in slightly more muted colours:))
because it was so warm I spent more time spindle spinning than knitting. I took my spindolyn and some silk hankies I had dyed and managed about one spindle full of very fine silk yarn. don't know if I'll ply it or use it as it is - I'll have to spin a lot more first of all! 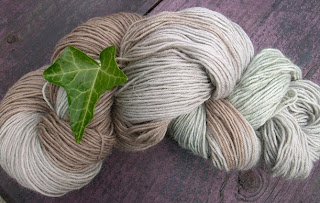 when I went to do the shopping in town a few days ago I saw some leftover ripe ivy berries in the hedges. I picked them to dye a greenish grey with them - but as you can see it turned out a bit different:)) I dyed a skein of sock yarn with it. the darker brown batch was dyed first, then I let down a bit more yarn into the liquid, which turned greenish - and the last third of the skein turned a beige-grey. at first I wasn't all that happy with the result, but by now I do like the colours. they do match and I think they'll be perfect for a guy's socks - not too bright for the more conservative taste:)
I also spun up the second batch of natural white baby alpaca, but it looks just like the other skein, so no need for another photo. when I raided a hobby and craft shop in germany, I found some nice pompoms in shades of purple, black and red and also some beads, so the plan is to use them in a few special yarns. I would like to try fairy tales as inspiration for spinning; the thought of making "snowwhite and the 7 dwarfs" or "the devil with the three golden hairs" fills me with glee:)) but first - more gardening, to tame the jungle outside....
Posted by Woolly Bits at 09:07

Oh no go for the spinning instead I just love the fairytale ideas - what are you going to come up with!! Love the gentle colours on your yarn too - I've just invested in some Landscape dyes so I can have a play, its like learning to paint all over again, great!

Excellent work on the quilt-so pretty. The garterlac dishcloth turned out so pretty in that color-good idea to add the icord and make it a hot pad! I can just picture the men's socks in that skein-very subtle. Nice to have you back!

Ash, as much as I love dyeing with natural dyes, for predictable results acid dyes are so much easier! if I need a certain tone I usually go for them - after ending up with tons of colours I didn't really want on the hunt for the one I needed:))

Cindy - thanks, I am quite happy to be home again myself:)) and knitting the garterlac reminded me of trying to work entrelac a long time ago, when I didn't really know how to work it properly yet! I ended up with buying lots of stitch holders to put them into each square until I can knit them:))

I think the quilt is lovely. The simplicity of the blocks highlights the memory pictures perfectly. The ivy colours are subtle but very nice. I'd have not expected those colours either, but they're pretty.
The use of fairy tales for spinning inspiration is such a neat idea. It almost sounds like it should be a challenge project..

Oh Bettina, the quilt is absolutely fantastic! What a wonderful idea. Maybe I should consider something like this for my new granddaughter. I'm so slow with my projects I'd about finish it for her to enjoy when she goes to college. :)

Hi, Some one from facebook refereed your link i have book marked it nice blogs you write see Free Adwords Voucher here