I did dye a lot last week, green and yellow and orange... and blue/purple too! this is the result of my rhamnus berries - nice colours like last year. esp. on silk... silk and wool is bluer and even the second batch in the same dye bath gave a nice colour on mohair and tussah/wool. 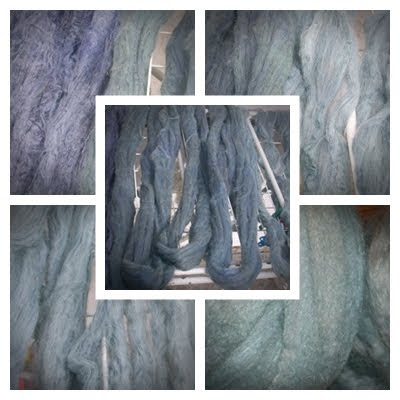 I had planned to take pix when all the wools are properly rolled into balls - but it took so long for them to dry that I lost patience:)) the colours are a bit stronger in real life, but you'll get the idea. I already picked another batch, but first I have to sieve off and dye with my goldenrod!
I also finished the plying of grey/black alpaca I spun. this is meant to be a Sirius dog. the sweater is very dark, so it couldn't only be black or the dog would hardly be visible (which might have suited Sirius really well?:)). the spread of grey is uneven, which is intended to make the dog look a bit shaggy and patchy. and I am going to try to brush up the alpaca slightly to give a more furry effect - after knitting of course. I recently got two small brushes, which are originally intended to fluff up Madeira wool embroidery yarn. should work on a dog just as well?:))

oh yes, and I still had some of the flecked cotton here, which I used for the dishcloths. just now I remembered that I forgot to take a pic of the starfish shaped one... all of those are knitted. I stumbled across another one, crochet this time (originally a potholder) and finished it - but already noticed halfway through the pattern that one thread would have been enough to make a dishcloth! well, I can never remember the US sizes for crochet hooks, so I doubled up the thread and worked with a 3.5 mm hook.... which resulted in a doily, far too large to use as a dish cloth or potholder:)) 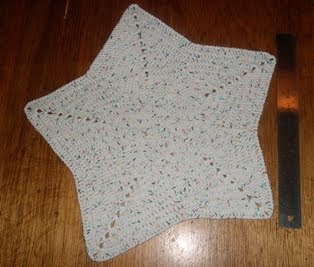 or maybe only useful for Hagrid's large tea mugs (buckets:))... well anyway, it doesn't look too bad and is fully washable, so what the heck. I did work one more round and an additional round of crab stitch, so that I only had about a metre or two of yarn left. which means - that the next batch of potholders/dishcloths can be in a different colour of leftover cotton yarn:))
late yesterday evening was spent with scratching seeds/seedhairs out of about a ton of rosehips (ok, it wasn't a ton, but it took so long that it seemed to be more:)) - I scratched for about 4 hours, not only the seeds, but also my arms etc... those seed hairs are itchy!! but I listened to some old cd's in the meantime to pass the time a bit faster... and stumbled across this: the hunting of the snark. somehow all of a sudden I had the idea of spinning a yarn inspired by this - might take some time, but I already know what I want to do. so let nobody say that scratching out rosehips isn't inspiring:))
Posted by Woolly Bits at 07:53

Well, I have to admit, I have never picked out my rosehips! Very pretty rovings, I really like the colors you got from these!

if you don't pick out the seeds - do you just mash it all and sieve them through for jam?? I tried that once and had loads of flesh sticking to the seeds, so I decided to scratch them out...

I love the colour of the rhammus berries-fabulous. I also like your idea of spinning the hunting or the snark and can't wait to see the resulting yarn.

I love the rose-hip picture on your header. My first thought seeing it was that it must have been an itchy experience! Are they from your garden?

yes, they are - we picked three batches and froze them all, but I think by now nothing much more will be there to pick. time to get the bags out of the freezer and make the jam:)) and yes - it itches like hell! but I like the taste so much that I just keep going - the itch is gone with a good wash and no rash etc. stays!