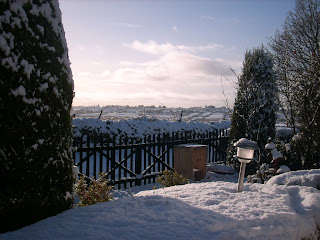 will you look at this! we had a few frosty days, but the forecast (and DH insisted on it!) said no snow or only "flurries" for us... well, it turns out that the flurries were a bit more substantial - everything is covered nicely in white! I haven't had white christmas over here yet - and it's doubtful that the white sparkly will still be here next week - but better a few white days leading up to christmas than none at all! I usually suffer from "no christmas feelings" beforehand, but add a bit of snow and everything changes:)) even DS hums along with carols on the radio:)) 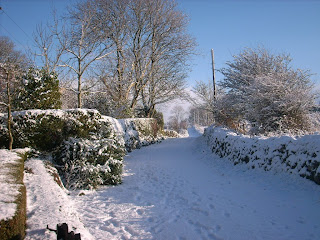 our road leading to the house looks very pretty like this - but I suppose the main roads aren't exactly inviting. we did receive mail yesterday, but not today (we don't usually get mail deliveries on either saturdays or sundays, but the last two weekends before christmas will see one of each...normally!) and it might well be that the school bus doesn't run tomorrow if the roads turn very slippery.... yay, an extra day of holidays right before the holidays!
of course I never cease to work on something textile, but I am looking forward to starting a new project soon. here's the photo of the felted and decorated laptop carrier - in better shape now, quite sturdy and large enough too. I still have an hour or two left on a small giveaway project later, but after that - who knows? I will have to dye some yarns for the next gifts, but before I do that (not during christmas baking and cooking....) I can start something else:)) to decide for one isn't easy though! 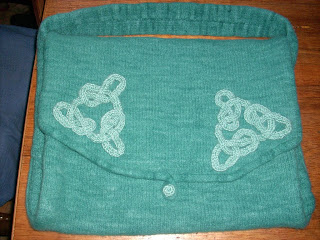 the bag is quite heavy - 900 g of handspun South American top. dyed with acid colour named "green" - which turned out turquoise, but I complained about that already. the celtic deco is from the same dyebath, ie. from the leftover after I dyed the main batch. and the top is teeswater, lustrous and smooth, worked into a fat i-cord over 5 stitches. all the edges are secured and strengthened with i-cords too and the handle (which also forms the narrow sidebands) is doubled up to keep it from "growing"! I hope it keeps the intended recipient's laptop save from bumps and crashes. off to start something new now......
Posted by Woolly Bits at 04:27

Love your computer bag-just a work of art! The snow does look lovely, you have had some fun weather lately!

What lovely winter photos! Seems snow is quite the thing this year, though we've been spared. Actually I'd rather have had the snow than all the rain. The bag came out nicely as well.

You have had much more snow than us! Here we have just had as sprinkling although Manchester Airport was closed for a while which is only about 50miles way. I agree with you it does make one feel more in the mood! I was chatting with my aunt and we both can only remember 2 white Christmases in the last 30 years so having one would be quite something!
I love the laptop carrier and the Celtic pattern is smashing
Have a lovely Christmas

The snow is beautiful but the roads sounded too slippery for us so we cancelled our Christmas trip to Westport. Pity. We were looking forward to it.