we are still having glorious weather - but unfortunately the forecast has mentioned drizzle for tuesday and a decline in the weather from midweek onwards:(( we were just getting used to a bit of sunshine.... but to make the most out of it (a typical irish saying:)) DS and two of the dogs went down to the bog with me. this is one of Stefan's favourite pasttimes - and the dogs love it too, because normally they can run around in total freedom. even the old girls go totally nutty, roll around in the grass, run down to the small river to drink and take a bath every now and then. not today though - because the second we rounded the bend along the bog road - there was a huge racket going on. three donkeys against two dogs, on the one side mad braying, on the other mad barking! of course we had to take out the leads and the donkeys watched the dogs suspiciously during our stay. other than that it was very nice - apart from the heaps of rubbish some of the neighbours throw into the bog - instead of the rubbish collection, because it costs money there:(( 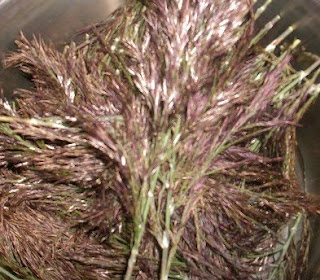 to cut a long story short - the pickings of blackberries were so measly, that I dropped the idea totally. I am rather careful and look at every berry - in case it is "inhabited".... a lot of them were and the rest looked so ugly that I didn't bother. I did however manage to pick 175 g of reed flowers - in the hope that I might get another nice green tone for my autumn colour collection. the mean part about this is that there are reed flowers as far as I can see - and I can't reach most of them without running the risk of ending chest-deep in a bog hole or worse:(( I could only pick along the small concrete brick and as far as I dared stretch across the river.... a canoo might be helpful - I could try to stake into the reed like the native americans, when they collect wild rice:))
well, anyway, the plan is to collect some yellows, gold, greens, oranges and reds to spin some lovely autumn coloured yarns - and also to dye some of the fine lace yarns I bought last year for the same purpose. it was a funny coincidence to read the article about the autumn leaf shawls in the fall issue of the spinoff - exactly what I thought I'd be doing with those colours! I also saw on another blog a nice idea - one multicoloured singles plied with one singles coloured in brown, to draw it all together. I still have some woven fabric (commercially done) in those colours and always had the plan to make a vest or something similar, part knitted and part commercial fabric. my usual complaint here: I wish I had more hands and/or more time:))
back to my reed flowers now - hoping for the lovely slightly smokey green I got last time!
Posted by Woolly Bits at 10:59

I just found your blog via another blog...I love felting but have yet to venture into dying...then I noticed your name and decided that I had to leave a post =) I am also Bettina and my husband's parents are German immigrants to the US.
So hi! From one Bettina to another.

welcome on my blog!:)) I think our name is quite rare in english speaking countries! I hope you'll start dyeing soon, it's great fun and quite addictive.... the problem is that I can dye much faster than I can spin or knit it up:))