I bought two balls of regia bamboo sock yarn early this year, and started to knit. I had just finished the rib of the first sock, when I saw the interesting pattern by Cat Bordhi, published in vogue knitting last year. frog, frog - but then I realised that I'd need to use the yarn doubled up and with shoesize 42 I was afraid that I wouldn't have enough 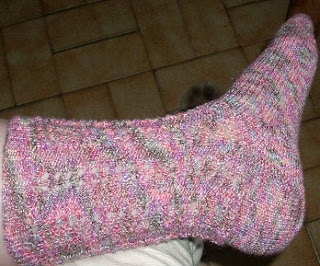 for this. eventually I decided to buy another lot later, and more this time, to try it out - and use these balls for simple lace socks. ok, they were planned for the summer - only, there was none at the usual time, i.e. between june to august, so I stuffed the knitting into a corner. until now (and no, even though the weather is reasonably good, I wouldn't call it summer) - with all the urgent projects finished I decided to give those socks another chance of life. the yarn knits up nicely, it's smooth and quite soft to the touch - might be nice for a scarf too, maybe doubled up to save time? it's reasonably elastic, because it's not pure bamboo - I am not so sure how it would feel in pure bamboo? one is finished - the other one halfway down the leg, should be done in a day or two more. (the lace isn't all that easy to make out - maybe I should have painted my foot black before taking the pic?:))
I have spun bamboo fibre before. the first time it was a small batch I bought at the K&S in dublin, a mess of fine white fibres with a funny "chemical" smell.... not difficult to spin, but not quite as nice as the soy fibres I bought at the same time. it lacked the lustre and the softness of the soy, so I didnt' think all that much of it. then I found a supplier of bamboo top - what a difference! not only did the fibres spin much more smoothly, the yarn felt differently, too! I used some of it to make dye samples and it even took natural colours reasonably well (lighter than wool and silk)! even though I read in the spinoff that it belongs to vegetable fibres, which don't usually dye well with alum and natural dyes! it still wasn't quite as soft as the soy, but with less twist during spinning and plying I ended up with a nice yarn for knitting (or crochet, I presume). it seems to be quite versatile, depending on how it is spun and I definitely will try some more of it.
I am not so sure though about those comments about its great value as a regrowable resource etc. the fibre (according to internet sources) is not produced like hemp or linen fibre. it is processed from pulp, rather like viscose, and to my mind this takes quite a few "industrial" steps - far more than wool, hemp or linen do. all regrowable resources - and nobody makes quite such a fuss about those? maybe it's because the bamboo feels nicer to the touch? I am always a bit suspicious about the advertisement of companies who claim to have "invented" the ultimate product - usually it turns out not to be quite so on closer inspection. I don 't think much about all the other properties claimed, such as being anti-bacterial etc. most people seem to forget that some bacterias are actually good ones (probably some buy bamboo because of it's anti-bacterial properties - and at the same time they buy pro-biotic yogurts to add bacteria:)) - and I don't feel I need this in my clothing. same for additions of aloe vera etc. in sock yarn and such. I have been knitting and wearing socks made from "normal" yarns for most of my life and don't really feel a need to change this. now, don't get me wrong: I am not totally green and fool enough to think that I am perfect in everything I do and use. I do use superwash wool, even though I am aware of the fact, that the production of it isn't quite blame-free! but I am not all that keen on handwashing socks, even though I am careful with the rest of my woollies.... enough work already and not keen on adding more to the list.... I just try to do as much as is practical to me, I feel that everybody has to make up his or her mind. I do use handspun untreated wool for socks too - sometimes, but they do take more care in washing, or I'll risk ending up with tough felted socks - too small for anyone to wear! now - back to finishing the other sock!
Posted by Woolly Bits at 06:07

I've never spun bamboo before so this post interested me very much. What I will be curious about, is how well the bamboo wears as a sock yarn. I assume Regia blended it with nylon(???)

Leigh, the yarn is a blend. 45% bamboo, 40% wool, the rest is some sort of poly (polyacryl I think). the bamboo isn't mixed into the fibre, it is a single, plied together with the wool/poly single. so far it wears well and looks the same - but after only one wash I didn't expect a major change! I assume it could easily be replicated in handspun! there are several pure bamboo yarns on the market now, but I thought some wool content might be good for strength and elasticity (my handspun bamboo wasn't elastic at all of course).